Govt. support for natural gas pipelines in Europe to be phased out by 2027

The European Parliament's Industry, Research, and Energy Committee voted on 27 September to phase out eligibility for natural gas pipelines in the Projects of the Common Interest Program (PCI), but to do so more slowly than advocated by environmental groups.

The PCI criteria is being revised to align the Trans-European Networks in Energy (TEN-E) regulation with the objectives of the European Green Deal. The EU has set a goal of a 55% reduction in GHG emissions by 2030 from a 2005 baseline, as its key measure of progress towards meeting a goal of net-zero emissions by 2050.

However, coming at a time when gas prices are surging in Europe and dragging power prices up with them, the committee members' vote reflected concerns that moving away from fossil fuels too quickly could be costly. As a result, the new eligibility rules will not go into effect until 2027.

According to IHS Markit's tracking of international gas prices, the benchmarks in Europe known as the Dutch TTF and the UK NBP showed spot prices this week surpassing €75/MWh. This is up more than 500% from a year ago, when they were about €12/MWh. High demand, low inventories, and inadequate imports are all being credited for the price spike, which is expected to last through the upcoming winter, unless temperatures are unusually warm.

The new PCI rule is a balancing act of many priorities, from cost to climate change, said Zdzislaw Krasnodebski of Poland, lead Member of the European Parliament on the committee, in a statement after the vote. "Apart from the general sustainability criteria, the projects would still be evaluated based on their contribution to energy security, market integration, and affordability for end-users," he said.

One of the most interested parties in the gas pipeline PCI is the European Network of Transmission System Operators for Gas (ENTSOG), which seeks to identify major gas infrastructure needs and coordinate investment. In a statement, ENTSOG called the proposed new PCI "an excellent opportunity to strengthen the sustainability objectives of the European energy infrastructure."

The new policy on PCIs would allow about 70 gas projects that are in the application stage to qualify for consideration. In fact, they are being fast-tracked, Krasnodebski said, because they can reduce energy costs for consumers, compared with alternative resources.

The allowance for finishing proposed projects correlates to gaps in Europe's network, as identified by ENTSOG in its Ten-Year Network Development Plan, which was updated in July 2021.

In that report, ENTSOG concluded, "… almost all gas infrastructure gaps can be addressed in the next five years by projects already initiated, including supply route disruptions. These investments will be mostly commissioned before 2025 and will bring affordable, diversified, and competitive supplies of gas, increasingly decarbonized over time."

The map below from ENTSOG shows Europe's natural gas infrastructure as of January 2020. 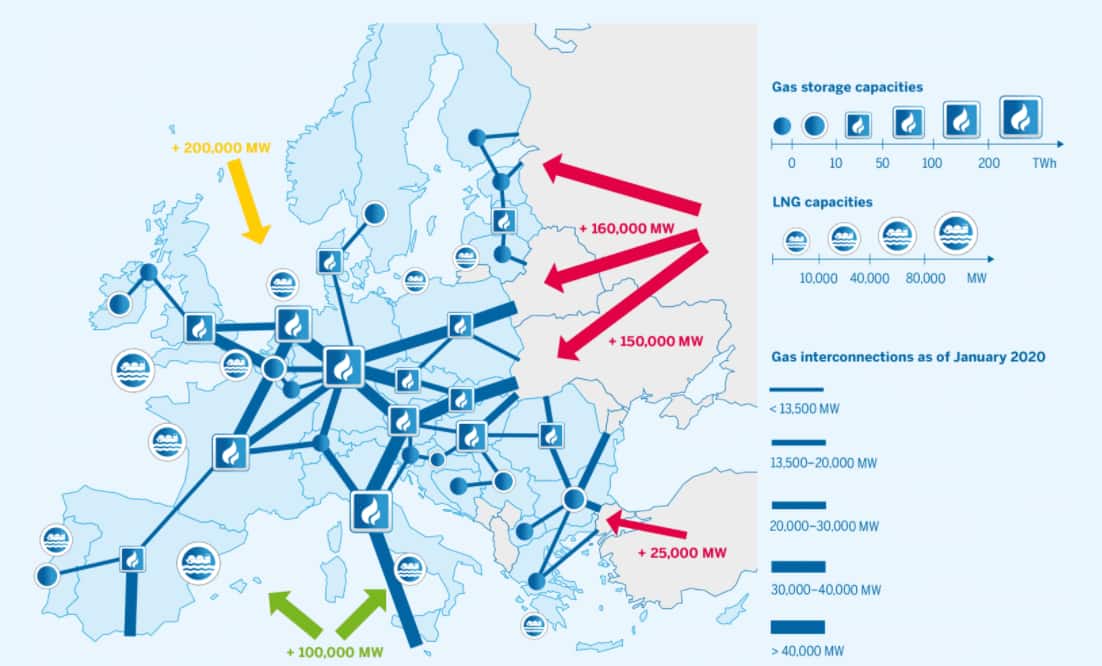 But investing more in the gas pipeline system angered environmental groups such as Global Witness.

"Today's vote would be a disaster for the climate if it ends up being reflected in the final law," said Tara Connolly, senior gas campaigner at Global Witness, in a media statement. "The science is clear: We need to urgently phase out fossil gas to prevent the worst effects of climate breakdown. EU member states must not fall for this giveaway to the fossil fuel industry."

The new PCI does take into account the energy transition, as it will allow funding for pipelines designed to transport hydrogen and carbon, the former as an energy source, and the latter for sequestration in carbon capture, utilization, and storage projects under development.

But as currently proposed, the support for hydrogen pipelines is misplaced too, said Connolly, because the amount of required hydrogen is undefined. Testing of gas-hydrogen blends to date have involved 5% hydrogen or less, which Connolly called "another back door by which fossil gas and its infrastructure are locked into our energy system."

But MEP Krasnodebski said that environmental concerns are driving the new policy, which he said will give states reliable gas resources so that they can continue to phase out coal, peat, lignite, and oil's use for power generation. "We should also bear in mind that Energy Union priorities remain valid and should still be reflected in the rules governing the support for important energy infrastructure projects," he said.