Fit for 55: Bioenergy without carbon capture gets short end of the stick

Proposals for the EU's main policy lever for renewable energy foresee a continued but less subsidized role for traditional bioenergy through at least 2050.

The European Commission's proposed revision to the Renewable Energy Directive (RED II) would force EU states to do their part to meet more ambitious EU-wide targets for renewable energy of 38-40% by 2030, raising the existing 32% target for that year. The stronger renewable aims are needed to achieve the bloc's new net-zero emissions targets outlined in its Fit for 55 policy agenda.

The revisions to RED II would also add a 49% indicative target for renewable energy used in buildings, alongside new sub-targets, including a binding EU-wide target for heating and a higher obligation for states to increase the share of renewables for heating and cooling (by 1.1% per year), according to analysis by IHS Markit.

But opponents say the higher targets for renewable energy will push the envelope of bioenergy's sustainability by spurring its demand for wood from forests, at least in the short term. The sector already receives subsidies from member states despite its questionable carbon benefits, leading to a 150% increase in the use of biomass since 2000, a June study from consultancy Material Economics found.

Bioenergy makes up 60% of EU renewable energy consumption when counting both electricity and non-electrified heating, such as firewood burned in fireplaces or wood pellets burned in boilers, district heating, or power plants, according to Eurostat 2019 figures. (Wind power dominates the EU's renewable energy sources when excluding heating.) 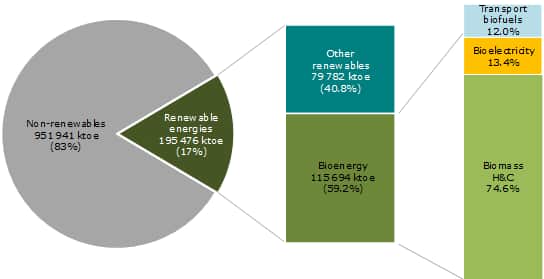 Bioenergy has a key role to play in the growth of renewables, the EC said, but its role in electricity production will be curbed beginning in 2026 when state subsidies for electricity-only forest biomass power plants will be prohibited under the proposal.

The subsidies will be permitted to continue for biomass-powered heating and in poorer regions identified by the EC. It noted bioenergy is also the largest renewable energy sector in terms of jobs and had a turnover of about €67 billion ($78 billion) in 2019, particularly in rural areas.

The UN and the EU both have said that re-planting of the trees harvested for burning makes the practice carbon-neutral, but experts argue this is not the case because the time it takes to grow new trees where the carbon is no longer stored makes the practice "dirtier" than burning coal.

"It takes several decades for forests to regrow. It is not prudent to cut down trees just to provide biofuel and then say, 'Okay, we can simply plant more trees.' Climate benefits from that will be delayed, and considering the urgency of the climate crisis, we don't have that time," said Michael Davies Venn, a visiting fellow in ethics and guest environmental researcher at VU Amsterdam.

Activists have filed legal actions to stop the EU's subsidizing of bioenergy as renewable energy, albeit unsuccessfully. In May 2020, the European General Court dismissed a case brought by individuals and environmental groups from six countries to annul biomass provisions contained in the current RED on the grounds the plaintiffs did not have legal standing.

Mary Booth, director of the Partnership for Policy Integrity and a witness in the case, is a critic of the practice of converting coal-fired power plants to run on biomass that the EU currently encourages. "When you burn biomass, you are emitting more CO2 on a heat output basis than even coal, like a smokestack per MWh, and yet biomass plants are counted as zero-emission [under RED]. So those who convert coal plants are claiming that they're increasing the percentage of renewable energy because now they've got a renewable energy plant instead of the coal plant and claim that they're reducing emissions," Booth told Net-Zero Business Daily.

"The emissions are greater than they were before: They're just counting them as zero. The problem is, you can put that on paper, but it doesn't follow in the atmosphere," said Booth.

At the point of combustion, wood may burn 74% of the emissions of coal, but its benefits over coal fade when accounting for bioenergy's supply-chain and knock-on carbon impacts.

This is why the EC proposes to pivot to subsidies for bioenergy where new technology can be deployed: the experimental carbon-negative practice known as biomass carbon capture and storage (BECCS).

But activists contest even the carbon benefits of BECCS. A February joint NGO statement by environmental academics said that BECCS would remove very little carbon. To replace fossil fuel power with burning wood fails to account for the lost opportunity to use the harvested trees to remove CO2, keep carbon in soils, and the excess fossil fuel emissions caused by processing wood, they said.

IHS Markit analysts writing in July noted the EC's proposal will change the carbon accounting rules for biomass energy producers and their suppliers.

The proposal would apply GHG savings thresholds to pre-existing biomass energy installations, whereas currently they only apply to new installations.

For example, it would require existing bioenergy installations to deliver at least a 70% GHG emissions reduction immediately, then 80% in 2026.

The bioenergy association Bioenergy Europe worries the GHG savings threshold, while attainable for large operators, would bury small operators like rural woodchip companies "in red tape which will critically impact their business plans and threaten their long-term commitments to clients and suppliers."

The EU's existing sustainability criteria for bioenergy, revised in 2018 with new biodiversity and climate safeguards for forest biomass under RED II, would also be further strengthened under the proposal.

For example, it would create "no go areas" for tree harvesting, including primary, highly biodiverse forests and peatlands. Other proposals were intended to minimize the negative impacts of harvesting on soil quality and biodiversity include prohibiting the harvesting of stumps and roots.

What is more, all 5-MW-and-larger biomass power plants that were not covered by the existing rules (which covered 20-MW-and-larger plants) would be captured under the revision, so an increased number of bioenergy plants would have to comply.

As less forest biomass is considered renewable under the proposal, it would raise the cost of biomass within Europe, but also reduce the reliance on imports from outside Europe, write IHS Markit analysts.

Not everyone approves of the added protection for forests, though. The proposed change to sustainability criteria "will result in negative repercussions on the entire bioenergy value chain," in particular harming rural economies, said Bioenergy Europe. "The current approach can have the unintended effect of increasing red tape and cost compliance without delivering increased sustainability," it warned.

The Wood Pellet Association of Canada said it was cooperating with Bioenergy Europe in talks with the EU on the revised RED. It is "strongly in favor of responsible biomass feedstock sourcing and sustainability criteria" that the Canadian pellet industry is well-positioned to meet with its existing certifications, but hopes the criteria can "achieve their intended objectives without adverse impacts to trade and the rights of [Canada's] indigenous people."

There are also sustainability criteria critics in the opposite camp.

Booth explains that the sustainability criteria, while aiming to make certain harvesting practices less damaging, don't do anything about the ongoing issue of harvesting trees. "Fundamentally, it comes down to this, this problem …. that they treat bioenergy as having zero emissions, even though it doesn't. So, they haven't changed anything in the sustainability criteria to fix that underlying fundamental problem—that burning wood emits carbon faster than trees can regrow to sequester," said Booth.

The EC sought to partly address carbon sink concerns in other Fit for 55 proposals, but it's a work in progress.

It has proposed a Forest Strategy aiming to improve forestry research while preserving the EU's last old-growth forests, alongside plans for a delegated act on the cascading use of biomass to prioritize the use of wood for creating long-lived products like buildings, retaining carbon storage benefits, in lieu of burning for energy use.

But the issue of abandoning tree harvesting must wait for later proposals, as the EC plans to take another look at the proposed subsidies in 2026 and may enact further restrictions for forest biomass.