An auction of lease areas off New York and New Jersey by the US Bureau of Ocean Energy Management (BOEM) 23-25 February produced multiple firsts for offshore wind in the country, including a $1.1-billion winning bid by a German energy giant making a splash with its debut appearance in this particular American renewable energy arena.

In addition, the lease sale saw the loftiest overall high bid total for an auction of any energy development rights in American waters since 2008.

The auction, the biggest US offshore wind lease sale on record in terms of acreage, attracted total high bids of $4.37 billion, BOEM data show. IHS Markit Senior Research Analyst Samantha Bobo told Net-Zero Business Daily 25 February "the industry must be extremely bullish to be willing to pay over $1 billion on a single lease and close to for several others."

Previously, the record for overall high bids in a US offshore wind auction was $405 million for lease areas off the coast of Massachusetts in December 2018, the last BOEM lease sale prior to what advocates saw as Trump administration efforts to block the industry's development.

The latest auction blew by that mark in bidding for just one of the six leasing areas (see map below), lease 0539, by the end of day one's action, when the tract's high bid was $410 million. The price for the tract, the largest lease area on offer, kept rising on days two and three of the auction, reaching $1.1 billion eventually, BOEM data show.

As Michael Zehr, federal affairs adviser at the Consumer Energy Alliance, a trade group, noted 25 February: "It is the put-your money-where-your-mouth-is dawn of America's newest and hottest emerging market."

The Biden-Harris administration's first wind development rights auction comprised six tracts of shallow waters totaling 488,201 acres (197,568 hectares) between New York's Long Island and New Jersey known as the New York Bight. The sale provided the most areas offered in a single US auction, and is the first of several major auctions planned by BOEM this year, including in California.

Winning bids obtain the exclusive right to propose a project in the lease area and obtain federal review of that proposal. BOEM aims to give the green light to 25 GW of offshore wind by 2025.

An initially anonymous bidder known as Bight Wind Holdings took the prize lease with the $1.1 billion bid, raising questions about the identity of its backers. Late 25 February, German power giant RWE pulled back the curtain. The company said its first foray into US offshore wind would be as part of a joint venture with the UK's National Grid in Bight Wind Holdings.

Sven Utermöhlen, CEO of RWE Renewables' offshore wind operations, said the winning bid was "a significant move for us as it marks RWE's entry into the US offshore wind market, one of our key strategic markets." As a result, RWE was "on the road to tripling our offshore wind capacity" to 8 GW by 2030, as part of its "Growing Green" growth and investment program, he added. 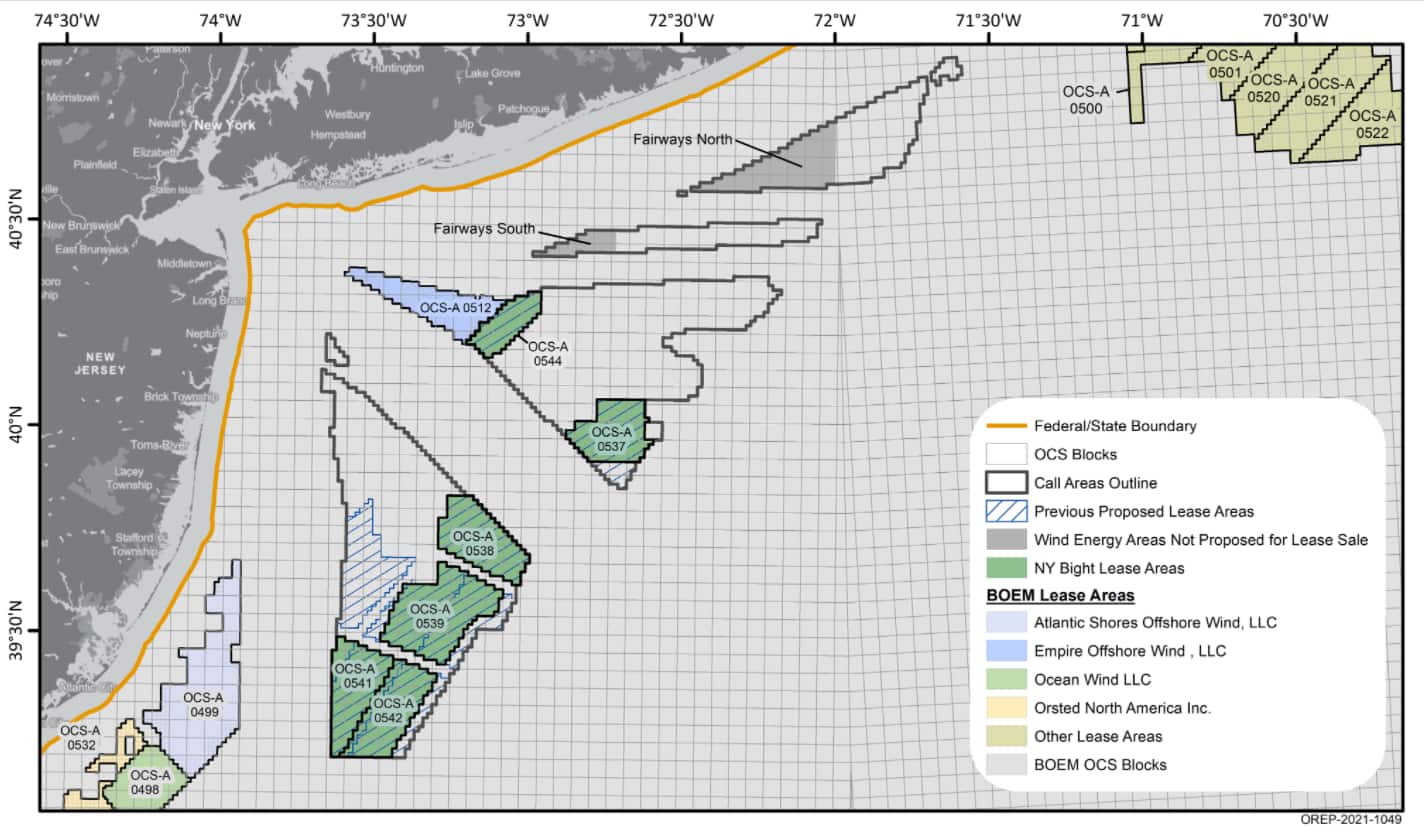 A deep-pocketed oil major in the process of re-inventing itself also opened its wallet. UK-headquartered Shell teamed up with France's EDF Renewables to win two leases. The companies submitted winning bids totting up to $1.065 billion as Atlantic Shores Offshore Wind Bight and Mid-Atlantic Offshore Wind won leases 0541 and 0544, respectively.

Among the other winners in the six bidding wars over a total of 63 rounds and three days were Portugal's EDP Renewables and France's ENGIE. US generation developer Invenergy, which until now had not successfully dipped its toe in the US offshore wind sector, submitted the $645-million winning bid for lease 0542.

Industry observers were impressed with the level of interest in the auction.

"It is no surprise the market has shown substantial interest in these New York Bight leases, in close proximity to millions of households, requiring electricity for decades to come. The prices are impressive, no doubt, and may be a harbinger of investment priorities for years to come by major energy firms," he added.

National Ocean Industries Association (NOIA) President Erik Milito said in a 25 February statement: "The record-shattering interest in the New York Bight lease sale is testament to how bright the American offshore wind outlook is and how confident developers are in the strength of the US offshore wind industry as a whole."

This week's sale was a resounding success for the Biden administration, and Interior Secretary Deb Haaland said after the auction 25 February that the bidding "makes one thing clear: the enthusiasm for the clean energy economy is undeniable and it's here to stay. The investments we are seeing today will play an important role in delivering on the Biden-Harris administration's commitment to tackle the climate crisis and create thousands of good-paying, union jobs across the nation."

BOEM expects the New York Bight sale to result in 5.6-7 GW of offshore wind capac­ity that, among other matters, is vital to state plans to decarbonize New York City, which currently is heavily dependent on local natural gas-fired power plants and lacks the transmission capacity to import clean power from neighboring areas.

On 5 January, New York Governor Kathy Hochul sought to circumvent the state's transmission difficulties, outlining plans to build an undersea grid system for shipping power directly to New York City. The "offshore wind grid" will be designed to deliver at least 6 GW of offshore wind energy directly into New York City while "minimizing onshore and ocean floor impacts," Hochul said in a statement in conjunction with her annual State of the State speech.

The largest lease area available in the auction, lease 0539, has 114,277 developable acres, or a quarter of the acreage on offer. The prize lease is the second closest to the New Jersey shoreline at 32 nautical miles and has the second smallest maximum depth at 51 meters. BOEM estimates the location will offer enough electricity to service nearly half a million homes. Kangas said the central location of lease 0539 made it an ideal site.

In contrast, BOEM's first auction for waters off the New Jersey coastline, in November 2015, drew only three bidders for two wind energy areas and yielded a combined price of less than $3 million.

The auction "proves that clean renewable energy off the Jersey Shore is poised to enter a boom period," Environment New Jersey Research & Policy Center Director Doug O'Malley said in a statement 23 February. After the auction ended 25 February, he gushed that the valuations were "eye-popping."

Fellow renewables advocates the Northeast Clean Energy Council saw the auction through a wider lens, tweeting that with open warfare breaking out in Europe, the lease sale was "a green shoot of a more optimistic world breaking through the snow."

Outside of lease 0539, interest was especially intense in four tracts, while the smallest of the lease areas by acreage and potential wind farm capacity, lease 0544, saw less frenzied attention, but still attracted a high bid of $285 million. The relative laggard of the bunch, lease 0544, is the furthest north of the lots offered. High bids for the individual lease areas were as follows:

As many as 14 bidders were active at any one time during the auction, with the active parties a mix of US and international players bidding on their own or in partnership. Among the 25 eligible bidders were Avangrid Renewables, BP, Equinor, SSE Renewables North America Offshore Wind, and US Wind.

Development of the leases would be the second phase of offshore wind expansion in waters off New York, and on a much larger scale. Already in February, construction of the 130-MW South Fork Wind began, project participants and Hochul said 11 February. Ørsted and Massachusetts-based utility Eversource Energy are the joint-venture partners in South Fork, which is scheduled to begin delivering power in late 2023 to Long Island Power Authority. The project received final approval from BOEM in January.

Amid all the auction excitement, outside of fixing the transmission grid, such targets as New York's and any projects that result from this week's lease sale must still overcome hurdles thrown up by vested interests. The long-running fight that in the end doomed the 454-MW Cape Wind project has echoes in a recent court filing.

The Responsible Offshore Development Alliance (RODA), which represents the commercial fishing industry, filed suit 31 January in the US District Court for the District of Columbia against BOEM and its parent agency, the Department of the Interior.

In the suit, RODA alleges BOEM and other agencies "failed to comply with numerous statutes and their implementing regulations," including the Outer Continental Shelf Lands Act, the Clean Water Act, the Endangered Species Act, and the National Environmental Policy Act.

RODA argues Vineyard Wind's final environmental impact statement does not "sufficiently evaluate the project's impact to greenhouse gas emissions and climate change" because the analysis "focuses on partial, project-specific climate impacts in the nearby geographic area but attempts to quantify only emissions offsets from the Project, with limited qualitative descriptions of emissions generated from construction."

Vineyard Wind-1 is a joint venture between Iberdrola unit Avangrid Renewables and Danish investment group Copenhagen Infrastructure Partners. Construction began in November and the project is expected to be online in 2023.

Supply chain issues could be another hurdle. Logistics logjams and international trade disputes saw US developers of wind, solar, and battery storage projects postpone the in-service dates for over 11.4 GW of capacity scheduled to come online in 2021, according to an American Clean Power Association (ACP) report released 15 February. ACP said 42% of that total is wind.

As BOEM Director Amanda Lefton noted in a statement after the auction concluded: "We must have a robust and resilient domestic offshore wind supply chain."