In a statement, Polestar said the public listing could leave the company with a valuation of up to $20 billion. The company is based in Sweden, but the transaction will be with American companies Guggenheim Partnership and Gores Group, which created the SPAC.

The deal has already been approved by the boards of Gores, Guggenheim, and Polestar, and is expected to close during the first half of 2022, subject to customary conditions.

In the mobility industry, where the energy transition has led to the creation of many companies developing electric plug-in and fuel cell vehicles, only Lucid Motors appeared to have a higher valuation. At the time of its initial public offering (IPO) in February 2021, Lucid's market capitalization was about $25 billion. Indicative of investors' interest in EVs, the market capitalization of Lucid Motors is now close to $40 billion.

A SPAC, as the name implies, is a financing vehicle in which an existing public company is used as a "shell corporation" to purchase or merge with an existing private company. Then, if all goes well for the acquirer, that new company becomes publicly traded through a "de-SPAC" process. The effect is the same as a traditional IPO, but a SPAC can speed up the process of taking a company public from a year or more to a few months, thus enabling promising operators that can benefit from infusions of cash to get the capital they need for growth.

"This is the route that has become increasingly of interest to companies in the technology space, and especially among startup alternative fuel vehicle manufacturers, as it allows them to leverage the benefits of being a listed company, including raising capital, without undergoing the level of scrutiny required for an IPO," noted IHS Markit Auto Group Principal Research Analyst Ian Fletcher in a statement on 27 September.

"This [Polestar] transaction reinforces the idea that high growth private companies (even those that are high profile) continue to view a de-SPAC as an attractive manner to raise capital, and that SPAC sponsors continue to have conviction in the value of energy transition companies," Vinson & Elkins partner Ramey Layne said in an email to Net-Zero Business Daily.

"Many energy transition companies are high growth, and need substantial capital to achieve that growth, and de-SPAC transactions continue to offer compelling advantages in terms of valuation, use of projections, and speed," Layne said.

In the case of Polestar, the automaker said that going public would provide it with the funding for the three new passenger car models it plans to introduce by 2025. These will first be available in Europe, and later on in at least 30 countries worldwide, according to prior company announcements.

Polestar's partner Volvo said on 27 September it will make an additional equity investment in Polestar of up to $600 million as well, leaving it with about a 50% share in the company.

Interest in SPACs is being driven by the rising push in the US and across the globe for solutions to reduce GHG emissions. "The projected capital needs are stunning," Vinson & Elkins said.

The International Renewable Energy Agency has projected that $130 trillion will need to be invested globally in the energy transition in the next 30 years to meet the goals of the Paris Accord, and that private-sector investment is the source that so far has lagged behind government funding. Credit Suisse pegged the figure at $100 trillion, and Ceres issued a report in June saying that private equity has been largely untapped for the energy transition and climate impact mitigation investments that are needed.

To put the need in context, Vinson & Elkins estimates that total global funds invested in sustainability-related activities is about $2 billion today, leaving a need for "private sector investment together with global governmental expenditures … to grow exponentially, over a sustained period of time, to provide necessary funds."

SPACs can be attractive for companies with promising new technologies in areas where a market potential can be identified. They have been one of the darlings of Wall Street in the last couple of years, as Vinson & Elkins quoted a report from Citi that 56 de-SPAC transactions in the energy sector have been completed or announced for the 12 months ending 31 July 2021. If all the transactions are completed, and assuming a $10/share valuation when they go public, that's $155 billion being invested by the public in the energy transition, according to Vinson & Elkins.

Autonomous-driving vehicles and EVs dominate the recent list, with 35 transactions or proposed deals. 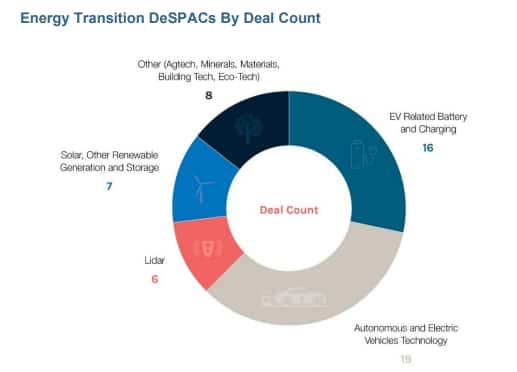 Despite the growth, Vinson & Elkins noted that litigation has arisen over some of the combinations, and US regulators have signaled that they are scrutinizing the sector more closely as well.

To cite one example, Gary Gensler, chair of the Securities and Exchange Commission (SEC), told the US Senate Committee on Banking on 14 September that the SEC could seek greater disclosure from SPACs in the future. "I've asked staff to look closely at each stage of the SPAC process to ensure that all investors are being protected. This includes developing rulemaking recommendations to elicit enhanced disclosures and conducting economic analysis to better understand how investors are advantaged or disadvantaged by SPAC transactions," he said.

In fact, the controversies over two other darlings of the EV sector—Nikola Motors and Lordstown Motors—indicates the downside of lesser disclosure requirements when companies go public through a SPAC. This year companies faced accusations of exaggerated claims about their technologies, which led to resignations of key executives.

On the positive side in the US, the $1.2-trillion federal infrastructure bill that soon will receive a vote in the US House (it passed the Senate in August) would provide some support for energy transition projects, and the GREEN Act proposals in the FY2022 budget bill would provide still more.

Though the budget faces steep divides in Congress—with energy and climate change-related matters among the contentious topics—the bill favored by Democrats includes funding and tax credits for energy sectors that have included many SPAC investments, such as EVs, energy storage, and biofuels, as well as requirements that power providers raise their share of renewable generation.