Portugal advanced plans for Europe's largest floating solar PV project as preliminary results from the continent's biggest auction devoted solely to the sector were announced in early April, a precursor to hopes of doubling the country's renewable generation capacity.

Mainland Europe's most westerly and southerly nation sits in an isolated position at the far edge of the continent's grid network. So, alongside plans to build more land-based solar PV capacity and jumpstart an offshore wind sector, the floating PV auction is part of the recently re-elected Socialist Party government's ongoing push to advance the energy transition using the resources it does have—sun, wind, and a relatively long coastline (see map below).

Some 60% of Portuguese power capacity is already renewable, with just over 56% of that renewable generation hydro-electric and the remainder onshore wind.

Prime Minister António Costa's government wants to accelerate construction of renewable generation, diversify supply options, advance a target for renewables' share of the generation stack, and wean the country's consumers off imported fossil fuels—a necessity heightened, as is the case elsewhere in Europe, by the war in Ukraine.

Another reason for the diversification is a prolonged drought that means renewable generation only supplied 57% of the country's power needs in March, according to electricity grid operator Redes Energeticas Nacionais, and 49% in the first quarter of 2022. Hydro-electric dams, Portugal's biggest source of power, operated at historically low levels in the first quarter, with their ability to produce electricity constrained to less than a third of typical generation levels.

At the start of February, Portugal's environment ministry warned that the month would see very little rain, compounding an already difficult situation. The ministry banned production of power on five dam systems for the rest of February in order to conserve water for the public.

So, following its commanding victory January's snap election, the government laid out a program to invigorate the electricity sector.

The program submitted to parliament on 7 April would double installed renewable capacity over the next decade, bolster the least energy efficient housing stock in the European Union, hold hydrogen auctions, boost solar output by 2 GW in just two years, and raise the output of onshore wind projects. It would also launch an offshore wind sector, increase storage capacity, and promote production of advanced and synthetic biofuels, including green ammonia and methanol, to aid industrial and transportation decarbonization.

By focusing on solar, the government is easing the feasibility of reaching the goals, Dghoughi said, as construction is much quicker than for alternative sources of power once the permits are in place. Portugal currently has 1.5 GW of solar capacity, he added. Dhoughi anticipates at least one government-run solar PV capacity auction a year.

The government is committed to speeding up the approval process, Cabinet Minister Mariana Vieira da Silva said during an 8 April press conference. In particular, the government will be streamlining solar farm approvals, she said, as it seeks to boost onshore and floating PV capacity.

Minister of Environment and Climate Change Duarte Cordeiro added that a framework would be created to simplify environmental assessments, which will help facilitate the approval process for all types of renewable generation, as well as offering greater support for energy storage.

Portugal is also accelerating its energy transition to counter higher energy prices than a large part of the rest of Europe, Vieira da Silva said during the briefing, a disparity that has been exacerbated by the war in Ukraine. In the short-term, the government plans to support domestic prices for petrol and diesel as well as natural gas.

Fuel poverty is among the issues the government's program seeks to tackle. Data collected by the statistics arm of the European Commission show a fifth of Portugal's population struggles to keep their homes warm. Eurostat data show Portuguese electricity prices for households in the first half of 2021 were the eighth highest out of the 27 members.

Later in the briefing, Cordeiro said the price of electricity could be decoupled from that of natural gas to help customers in the short term. In late March, Portugal and Spain submitted a plan to the European Commission that would see the price of gas used by power plants capped at €30/MWh ($32.43/MWh) for at least the rest of 2022.

Gasoline, diesel, gas, and electricity prices have all increased since Russia invaded Ukraine in March, adding to 2021's price inflation, heaping pressure on governments across Europe.

Efforts from the German coalition government and Costa's administration are necessary and appropriate, according to the IEA, which in early March released a 10-point plan for decreasing the continent's dependence on hydrocarbon imports from Russia.

"Now more than ever Europe needs to strengthen its energy security. Renewables are a home-grown alternative to imported fossil fuels from Russia and elsewhere. Portugal has successfully trialed floating wind with WindFloat Atlantic, one of Europe's first floating wind farms," a spokesman for WindEurope said in an email 15 April.

"Now is the time to ramp up the Portuguese offshore wind supply chain, create lasting jobs and hold Portugal's first competitive auction for offshore wind. To reach the new 80% renewables target, onshore wind will play an important role. It is even cheaper and faster to scale than offshore wind," he told Net-Zero Business Daily.

Environmental NGO ZERO said in a statement 3 April that the program "maintains the good strategies for expanding renewables and improving energy efficiency," although it also questioned how streamlined environmental assessments would maintain the integrity and transparency of the process.

Solving part of the production problem at Portugal's existing key renewable generation sites was one of the reasons for the floating solar PV auction on 4 April.

The government awarded the rights to develop 183 MW, of which around 56% were awarded in the form of Contract for Differences (CfD). One of the other lots awarded though saw what the government said was the lowest tariff for renewable project yet, with the developer paying €4.13/MWh to the system to produce the power.

EDP Renewables, a subsidiary of once state-owned monopoly EDP, was the biggest winner in the auction, securing lots for a combined 70 MW, while Portugal's second-largest renewable energy producer Finerge won three lots with a combined 38 MW of capacity.

Describing itself as the world's fourth largest renewable energy producer, EDPR said the 70 MW of grid connection capacity won for floating PV is expected to allow the company to install up to 154 MW of renewable capacity, including 14 MW of solar overcapacity and 70 MW of hybrid wind capacity, neither of which will receive the CfD as they were not part of the auction. The project is expected to be operational in 2025.

The diversification of hybrid projects improve the potential for profitability when bids into auctions are as low as they were with this one, sources said, as the additional output can be sold at the market price. In addition, the rights to produce power on the reservoirs are for 30 years, while the initial tariff is only for 15 years, meaning that the developer can obtain the market price for the remainder of the period.

As well as domestic players EDPR and Finerge, Paris-listed renewable developer Voltalia won 33 MW of capacity development rights. The company's 33-MW Cabril project is expected to be commissioned no later than 2026 and project received the highest price of €41.025/MWh.

Companies have been waiting to invest more in Portugal, said S&P Global's Dghoughi, citing the case of Spain's Endesa, the fourth company that won rights to develop floating PV capacity. Endesa plans to build a 42-MW floating PV project on the Alto do Rabagão reservoir by 2026 at a cost of €115 million, it said.

Endesa won government approval at the end of March to transform the site of the former Pego coal plant with a hybrid solar, wind, and battery storage complex. The company plans to install 365 MW of solar capacity, 264 MW of wind turbines, and 168.6 MW of storage capacity, as well as a 500 kW green hydrogen electrolyzer.

Spain in December announced plans to build an offshore wind sector from scratch that will see as much as 3 GW of floating offshore wind capacity built. It followed that in March with a floating PV roadmap that would offer 25-year concessions. Spain has around 100 state-owned reservoirs. Spain is Europe's second largest market for traditional PV.

Portugal is set to hold its first floating offshore wind auction later in 2022, with as much as 4 GW of capacity to be made available, industry sources say. EDPR is expected to be at the forefront of those developments and already has a 25 MW test project in operation in Portuguese waters, the Windfloat Atlantic Project.

The potential for development of floating wind capacity—when the nascent technology reaches industrial scale—is substantial in Portugal, according to the Global Wind Energy Council. 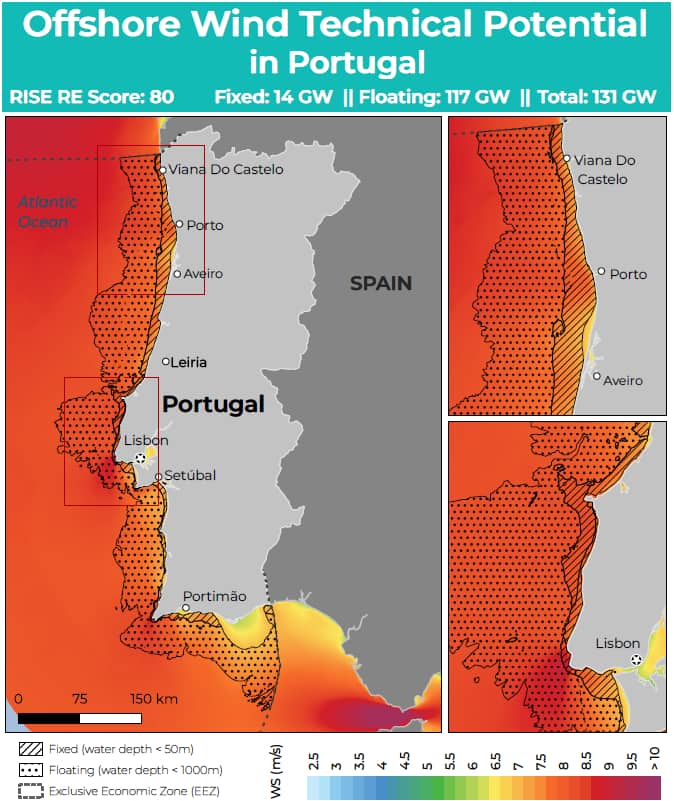 The onshore wind market in Portugal is well established. At the end of March, wind turbine manufacturer Vestas said it had reached 1 GW of turbine orders in Portugal. Expanding the onshore fleet is difficult, however, said S&P Global's Dghoughi, because of competition for space with agricultural interests.

However, turbines can be added at existing complexes, which already have grid connections, as Spanish developer Iberdrola is doing at its Tâmega hydroelectric complex in northern Portugal. Some 300 MW of wind capacity will be added at the site of 1.158 GW hydro complex, the third phase of which will come online in 2024. The facility also has 880 MW of pumped storage capacity.