European green ammonia is profitable now and will be again

Any green ammonia plant online in Europe at the moment will be making money, even though such facilities were not expected be competitive with their gray or blue ammonia counterparts until the mid-2030s.

Green ammonia involves utilizing green hydrogen as the key building block, manufactured from water and renewable power, rather than using natural gas as the base feedstock.

The ammonia is then transformed into fertilizer or can be used as shipping fuel or a power plant feedstock, offering a decarbonization pathway for the agriculture (see diagram below), transportation, and electricity generation sectors.

Northwest European ammonia prices topped $1,600/metric ton (mt) CFR as late as early May (an all-time high) and remain above $1,000/mt CFR as the second half of June begins, according to S&P Global Commodity Insights Principal Ammonia Analyst Georgy Eliseev. CFR is an ocean shipping term that indicates the seller is responsible for delivering the goods and taking care of the transportation of the goods to the agreed upon destination port.

Such heady marks are in stark contrast to multi-year lows below $300/mt in July 2020 as a result of the COVID-19 pandemic and a price of less than half the record high as late as November 2021, he added.

Only one commercial-sized European plant can currently take advantage of the market dynamics for green ammonia. In addition, prices for any kind of ammonia are set to fall and Eliseev expects European gas and coal prices to halve. But there will be plenty more green ammonia plants charting a path to commercial operations, although many will need subsidies initially as the ammonia price falls.

Green ammonia projects with a combined capacity surpassing 63 million mt have been announced, according to Eliseev. 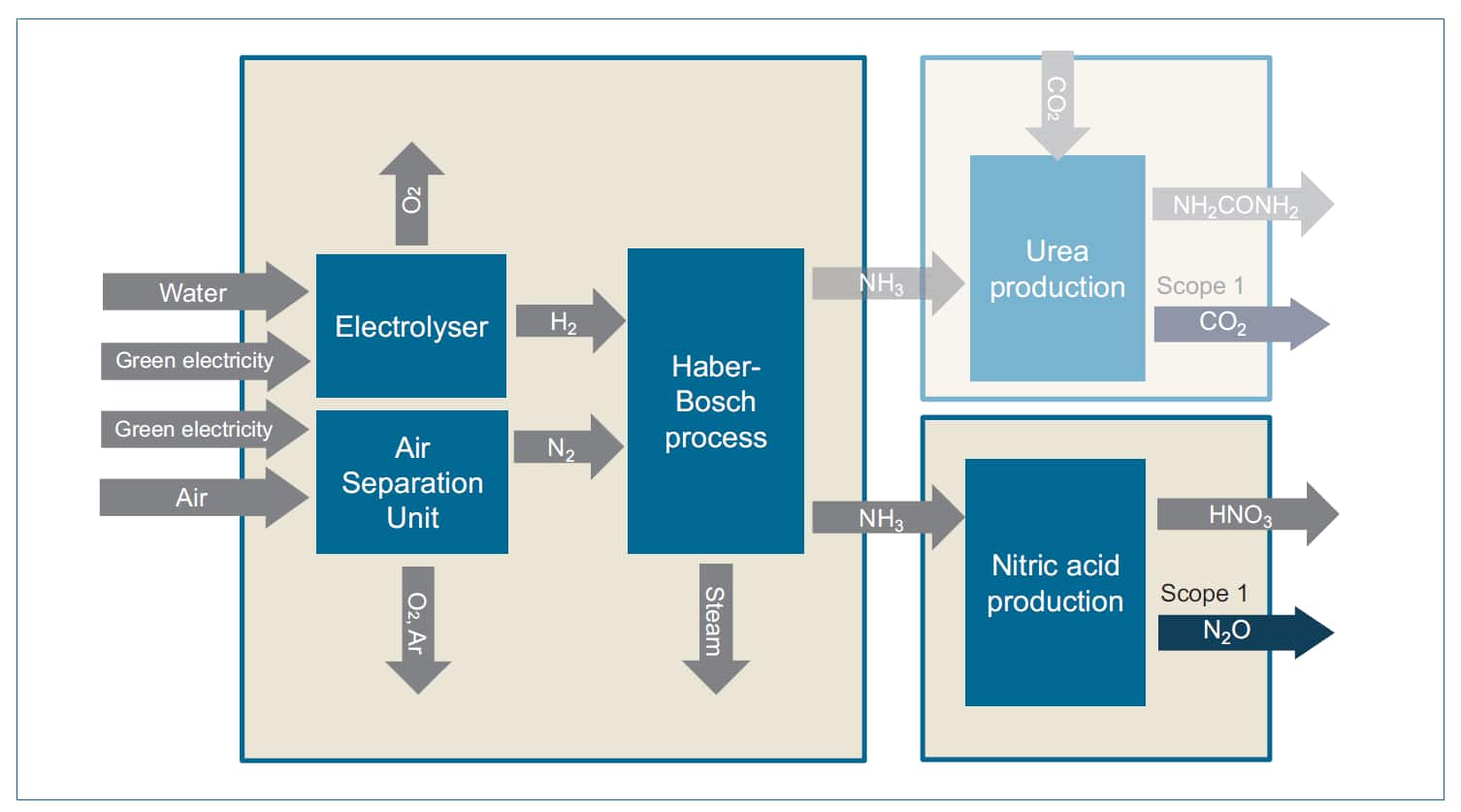 Due to its critical role in the production of food, ammonia has often been treated by national governments as a strategic asset, according to a recent study published by Fertilizers Europe. As a result, the European fertilizer industry has more than 120 production sites. Currently, Europe has about 19 million mt of annual ammonia production capacity.

In the future, the world will need more ammonia but with fewer emissions, the International Energy Agency (IEA) said in an October 2021 study. An increasingly numerous and affluent global population will lead to growth in ammonia demand, it said. Plants in Europe are around 40 years old on average, compared with 12 years in China, which is home to around 30% of global capacity.

So, scaling up green hydrogen and green ammonia production (See Net-Zero Business Daily articles here and here) is all some industry watchers and participants can talk about at the moment.

Europe's first commercial-size green ammonia facility came online in mid-May. The joint venture between Iberdrola and Fertiberia is part of a €2 billion ($2.095 billion) green ammonia capital expenditure plan, Ignacio Galán, chairman of the power generator, said in a statement 13 May.

Costing €150 million, the initial 3,000 mt/year green hydrogen and 100-MW solar PV facility in Puertollano also has a battery storage capacity of 20 MWh. By 2027, Iberdrola expects to be producing 40,000 mt/year of green hydrogen for Fertiberia at the site, it said.

Once the venture reaches capacity, Iberdrola expects it to account for 20% of Spain's 2030 green hydrogen production target. Iberdrola also has a green hydrogen plant operating just outside Barcelona that will feed the fuel needs of the Catalan city's buses. In addition, the company is planning a number of green hydrogen projects outside its home country, including one that will enter service in 2024 and aid the decarbonization of the Scottish whisky business.

Puertollano will be the first of many facilities to come online, although not as much as has been proposed, according to Eliseev. Based on current announcements, some 30 million mt of green and blue ammonia will be being produced by 2028, he said. Under a base S&P Global scenario, capacity is set to hit 48 million mt by 2030 and 120 million mt by 2035. "We are looking more at a longer-term horizon than an immediate quick win or quick fix," added Simonova.

Alongside Fertiberia, rival fertilizer powerhouses are also investing in green hydrogen and ammonia (and blue ammonia—which is gray ammonia combined with carbon capture and sequestration).

The plant in Porsgrunn will have an annual capacity of around 10,000 kg/day of hydrogen, enough to produce 20,500 mt/year of green ammonia, which in turn can be converted to between 60,000 and 80,000 mt of green fertilizer, roughly five times the annual production of food grade wheat in Norway, Yara said.

Yara sees major financial opportunities in blue and green ammonia. On 2 June, the company's board signed off on spinning off part of Yara Clean Ammonia in an initial public offering. Yara Clean Ammonia was established as a separate business unit in February 2021. The parent company said an IPO will accelerate the spin-off's growth and offer a better reflection of the unit's value.

In a 4 May presentation, Yara said "subsidized" green ammonia projects could match the blue ammonia cost curve from 2035 onwards, but will require significant cost progress. It warned that further regulatory support is required and subsidies for green ammonia were needed. Blue ammonia will be the key immediate focus for the unit before economics improve for green ammonia, it added.

Once ammonia prices fall, those subsidies will be important, according to the Fertilizers Europe study. Researchers at German chemical engineering and biotechnology network DECHEMA, who authored the study, calculated the 2030 cost of producing green hydrogen on-site would total €760/mt in northern Europe, €1,350/mt in Western Europe, €1,200/mt in Central Europe and €830/mt in southern Europe.

Across the North Sea from Norway in the Netherlands, meanwhile, fertilizer producer OCI said in March it was teaming up with NortH2 to develop integrated green ammonia and methanol value chains using green hydrogen the joint venture will supply. NortH2 is an offshore wind-to-hydrogen electrolysis project being developed in the Eemshaven area by Equinor, RWE, Shell, Gasunie, and Eneco that could have as much as 4 GW of hydrogen electrolysis by 2030.

Mauritania's government inked a framework agreement with CWP, which is already involved in two of Australia's biggest green hydrogen and green ammonia production and export projects. The AMAN project will comprise 18 GW of wind capacity and 12 GW of solar capacity and is expected to produce 1.7 million mt/year of green hydrogen or 10 million mt/year of green ammonia.

Ambitions in the West African nation are not limited to one mega project though. Also on 24 May, the country's government signed a similar framework agreement with UK-based developer Chariot for Project Nour, which would have 10 GW of electrolyzer capacity. A feasibility study will now be carried out over the coming two years, said Chariot, which in April agreed to work with the Port of Rotterdam on green hydrogen shipments to one of Europe's premier energy trading hubs.

S&P Global's Eliseev foresees the Middle East and North Africa as well as Australia becoming major green ammonia producers and exporters as the current decade and the 2030s progress. Low-cost producers outside Europe will not be inconvenienced much by a Carbon Border Adjustment Mechanism—whereby imports from nations without programs that reduce emissions are penalized—or the EU Emissions Trading System price, he told forum attendees. 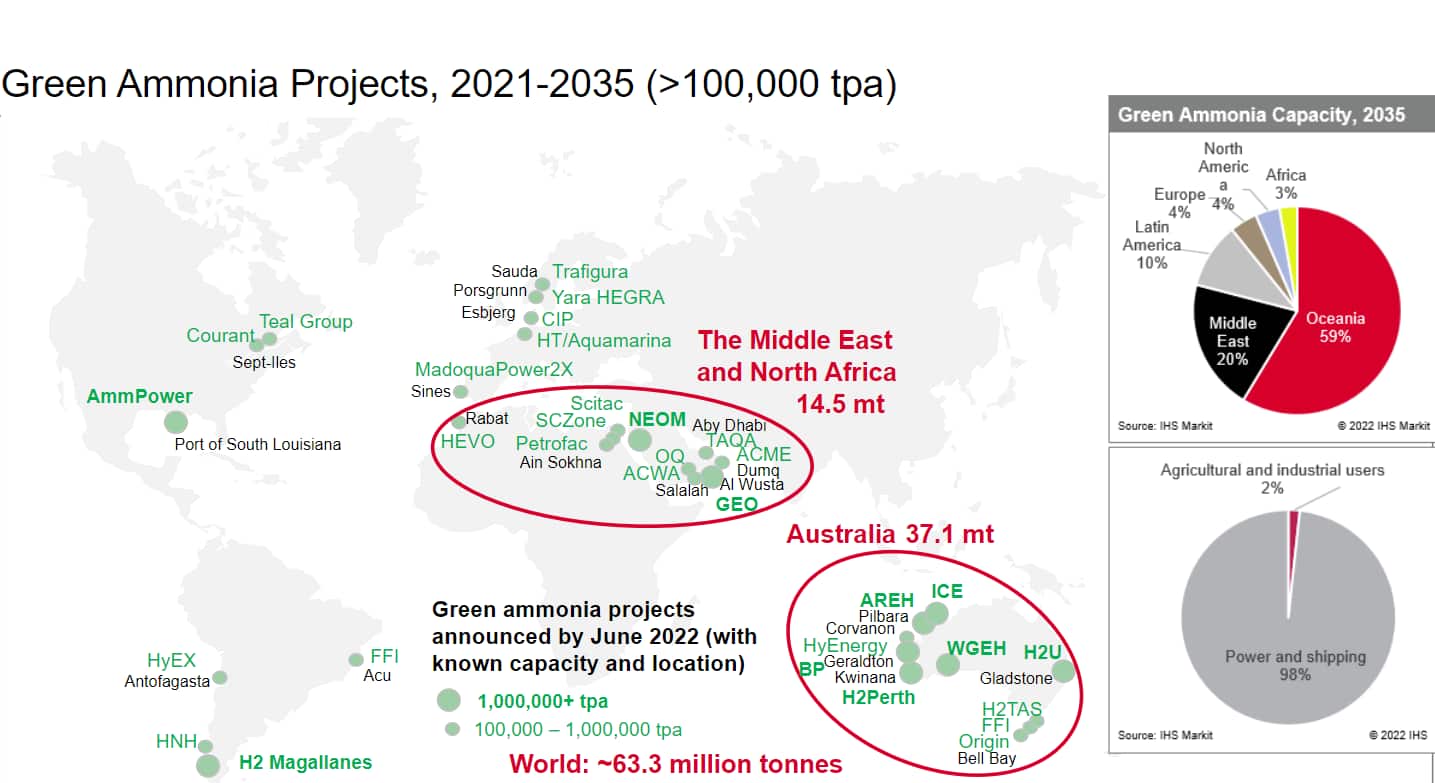 Ammonia is currently produced and traded around the world, the IEA said in its study. China is the largest producer of ammonia, accounting for 30% of production (and 45% of CO2 emissions), with the US, the EU, India, Russia and the Middle East accounting for a further 8-10% each, it said. Ammonia is traded around the world, with global exports equating to about 10% of total production, it added.