Europe's major aviation trade groups revealed the outline of a plan through which all flights within and departing Europe will realize net-zero carbon dioxide (CO2) emissions by 2050.

Known as "Destination 2050 - A Route to Net Zero European Aviation," the aim of the plan is to reach the net-zero goal through a combination of four main measures: improvements in aircraft and engine technologies; use of sustainable aviation fuels; carbon offset purchases; and improvements in air traffic management and aircraft operations.

Today, aviation contributes about 2% of all human-induced CO2 emissions (and 12% of the transportation sector's), according to the industry's Air Transport Action Group (ATAG). ATAG members have committed to a fuel economy improvement of 1.5% per year through 2030, as a way to reduce the environmental impact of air travel.

Other studies, such as work by the Global Carbon Project, project a higher impact of as much as 2.5% of annual global emissions coming from aviation.

Destination 2050 would result in the avoidance of about 250 million metric tons/annum (MMtpa) of CO2 emissions by 2050, with improvements in aircraft and engine design and sustainable aviation fuels contributing about 210 MMtpa of those reductions.

"(Under the four measures) absolute emissions are reduced by 92%, while the remaining 8% is removed from the atmosphere through negative emissions, achieved through natural carbon sinks or dedicated technologies," the report said.

The result would be a radical shift in the trajectory of emissions from a business-as-usual approach for aviation (see graph below). 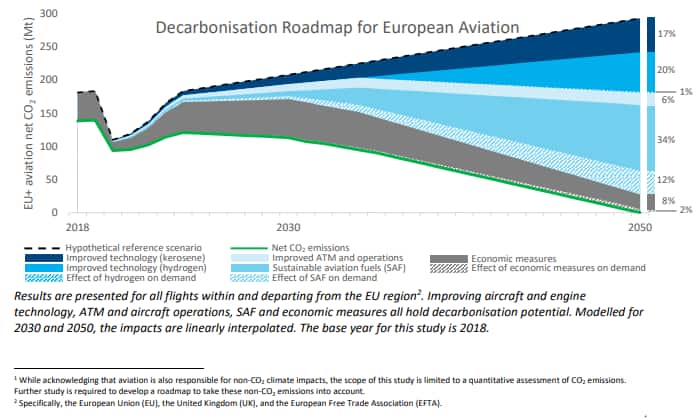 Improvements in aircraft and engine technology would be gradually rolled out across the industry as aging planes are replaced, the report said. The report also states that sustainable aviation fuel could reach the market at about 3 MMt in 2030, rising to 32 MMt in 2050, while liquid hydrogen would be account for about 10 MMt by 2050. Combined, these would displace about 90% of the anticipated demand for fossil fuel-based kerosene in 2050.

The report comes as the industry is still struggling to recover from the impact on travel of COVID-19 pandemic-induced restrictions.

In a report issued in November, the Aviation Round Table, which includes the same trade groups that wrote Destination 2050, as well as more than a dozen others in affiliated industries, issued a call for more financial assistance from the European Union (EU).

"The Aviation Round Table calls on the EU and its member states to put in place a targeted European Aviation Relief Programme covering the period until the recovery of air traffic, which is not expected before 2024 or 2025," they wrote.

Included in that request for additional financial relief, the Aviation Round Table raised the issue of a long-term commitment to emissions reductions. "[We] invite the EU and member states to join us in defining and agreeing, by the end of 2021, an EU Pact for Sustainable Aviation," the group stated, offering net-zero CO2 by 2050 and "significant emissions cuts by 2030…"

The Aviation Round Table called for an increase in incentives for retiring older planes and public funding to support research on low-emissions aviation technology. And it said it supports the existing emissions trading scheme known as the Carbon Offsetting Scheme for International Aviation (CORSIA).

Now, the Destination 2050 report offers more detail on how the industry can reach net zero, and what some of the costs might be. It says that a carbon fee of about €160/mt ($193.87/mt) in 2050 would correlate to the expected costs of carbon removal and offsets.

The use of sustainable aviation fuels, a major component of Destination 2050, is an opportunity for the aviation sector to reduce its carbon footprint, especially through biofuels production, according to IHS Markit. Some European refiners are embracing this opportunity, as they face a continued tightening of regulations on crude-based diesel fuel and kerosene. "A growing market for [hydrogenated vegetable oil] in the aviation sector and the US market could also represent an opportunity," IHS Markit wrote in a report in October 2020, "Bracing for a low-carbon future."

"Other countries in Europe are expected to follow suit, and even the European Commission is considering coming forth with some binding sustainable aviation targets, to complement (or amend) RED-II," IHS Markit said, referencing Europe's renewable energy criteria for fuels that will be in effect in 2030.

However, IHS Markit warned that the potential growth for Europe's biofuels production—whether for aviation or other uses—will be limited by feedstock availability, market size, and government support.