The EU met its 2020 renewable energy targets for the transportation sector, recent data show, despite most of the EU 27 lagging in their contributions.

The news comes as no surprise. The European Commission (EC) expected that the bloc on average would exceed both its 20% renewable energy and 10% transport sub-targets for 2020 under the Renewable Energy Directive (RED), even without the full participation of some states.

Several states went above and beyond their obligations to use biofuel (mostly biodiesel blends) and renewable electricity, for example in trucks, buses, and trains.

Foremost among those exceeding the 10% target was biofuel-hungry Sweden (with about 32%), followed by Finland (with about 13%), the Netherlands, and Luxembourg (both about 13%). Estonia and Hungary also shot past the target.

However, 15 of the 27 EU countries did not do their part. This included not only Germany, France, and Spain, but also Greece, Lithuania, and Poland.

Despite the pandemic, all EU member states, with the exceptions of France and Finland, increased their use of renewables in transportation in 2020, data from the statistical office of the European Union shows. The 10% target was included in the 2009 RED that mandated EU member states pass laws to boost renewable energy use within power generation and transportation.

Around the same time, the Fuel Quality Directive set transport fuel suppliers a 2020 carbon intensity reduction target of 6% compared with from 2010 levels.

The policies together were expected to drive the uptake of biofuels mostly sold as blends of biofuel with petrol and diesel, according to an EU study, but also drove the use of renewable electricity for trains.

Reaching the milestone of bloc-wide 10% biofuel and green electricity usage in the transportation sector helps the EU to reach its 2050 climate neutrality objective. 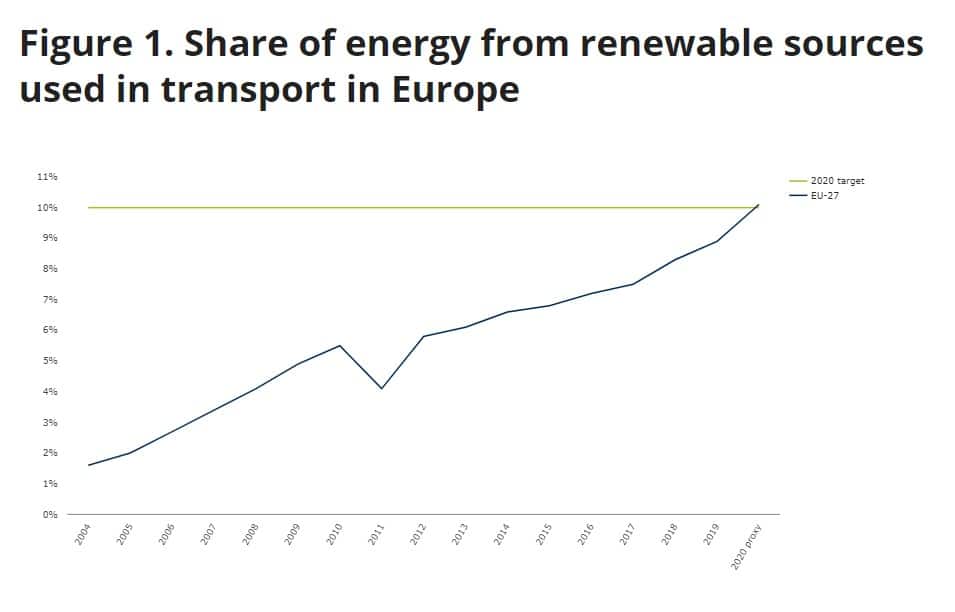 Proposals for next RED phase

In July, the EC proposed a revision of RED to raise ambitions for biofuel use, among other things. The next phase of RED will target 27-29% of renewables in transportation by 2030. What counts towards the target is being extended in ways that encourage the use of biofuels in aviation and shipping, currently outlier markets.

However, the target in the past has driven the use of unsustainable crop-based biofuels, such as palm oil, soy, and rapeseed. Campaign group T&E says the target could instead be safely met with alternatives like renewable electricity and advanced biofuels grown from non-food crops.

On the other hand, Brussels-based European Biogas Association argued biomethane had contributed to meeting the target more than green electricity and warned against a separate EC proposal to phase out "affordable" internal combustion engines in favor of electric vehicles.

In line with what T&E suggested, the EU has been trying to get states to use climate-friendly advanced biofuels since a June 2018 revision to RED, but without much success.

In RED's latest proposed advanced biofuels target, there will be "double counting" (more or less) of biofuels used by ships and planes, as the EU intends to increase the use of biofuels in those sectors.