Global refined copper demand will nearly double by 2035 and continue to grow thereafter, with the energy transition the primary engine of growth, according to a report titled "The Future of Copper" released by S&P Global 14 July.

That jump in demand is set to create a chasm between customer needs and mine and refinery output as the 2020s progress and the energy transition proceeds. Substitution and recycling won't be enough to meet the needs of suppliers of electric vehicles (EVs), power infrastructure, and renewable generation, the report authors said.

As a result, net-zero emissions by 2050 goals will be "short-circuited" without an unprecedented amount of new mine openings at an equally unheard-of pace, they said, warning there is little to no chance of such circumstances occurring.

S&P Global Vice Chairman Daniel Yergin said during a 14 July webinar on the report that it was a "daunting challenge" and that the coming supply-demand gap should be a "wake-up call" to leaders.

Demand from energy transition markets is expected to peak in 2035 at almost 21 million mt before sliding through the late 2040s and then marginally increasing in 2050, it said. 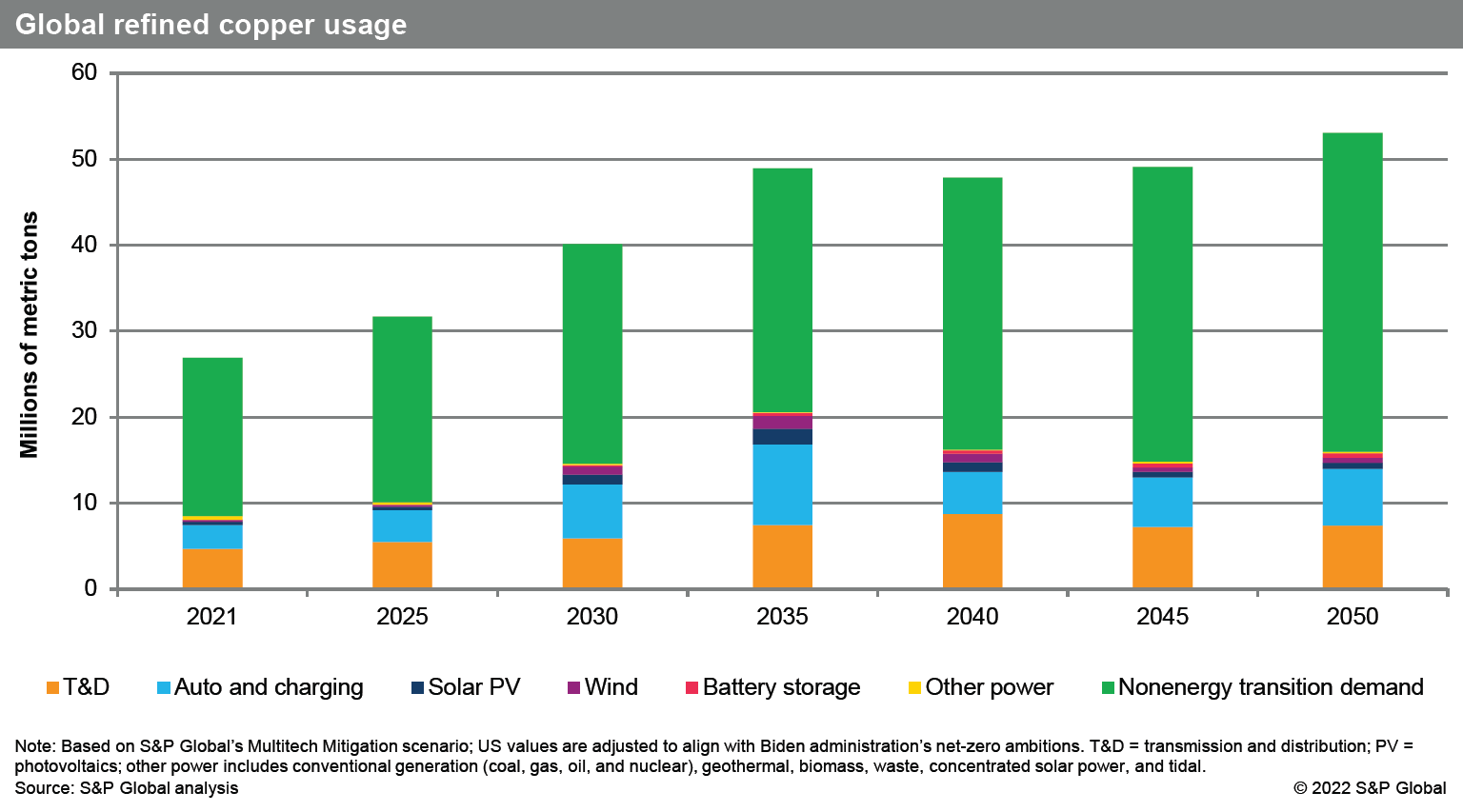 Consumers driving the transition will need an additional 12 million mt a year of copper by 2035, the report's authors argued. Copper demand from these sectors will see double-digit annual growth rates through 2035, they added.

However, demand from traditional markets is expected to increase continuously between 2020 and 2050 at an average annual rate of 2.4%, S&P Global said.

Part of that demand curve incline will involve the industrialization of emerging economies, according to the report. Currently, the top five refined copper-consuming countries are industrialized nations. By 2050, China and the US will still be in the top five, but India, Vietnam, and Mexico will supplant Germany, Japan, and South Korea, it said. Mexico and Vietnam are set to shift to higher value-added manufacturing industries, many of which are copper-intensive.

The metal of electrification

Copper—known as the "metal of electrification" since the earliest days of product innovation in the 1800s—is essential to all energy transition plans. It is a fundamental building block because of its durability, high conductivity, and efficiency.

As Bold Bataar, the CEO of Rio Tinto, the world's second largest mining company, told S&P Global's CERAWeek conference in March: "Without copper, there is no decarbonization because it spans all renewable energy sectors."

Consumption by the power transmission and distribution sector is set to rise to 7.5 million mt/year in 2035 from about 4.7 million mt/year currently, they said. Solar PV, wind, and battery technologies' combined demand, meanwhile, is expected to increase from about 600,000 mt/year to 3.6 million mt/year, which S&P Global noted was the fastest relative growth rate overall.

It won't just be EVs though. The charging infrastructure needed to power up the EVs and electric trucks companies such as Volvo or US-based Nikola are building will require plenty of copper too.

Meantime, offshore wind is the most copper-intensive renewable energy technology, the analysts said. Direct-drive turbines, which are favored for offshore use because of lower maintenance, are more copper intensive than the gearboxes used historically by turbines, plus the transmission lines from a wind farm to the shore are substantial and are going to get ever longer, they noted.

A Rocky Road ahead

With all this demand, pressure will increase rapidly on supply-side players. The shortfall could top out at 9.9 million mt in 2035 under S&P Global's "Rocky Road" scenario, which is based on a continuation of current trends in capacity utilization of mines and recycling of recovered copper. It warned that this would mean a 20% deficit compared with the supply level required to meet net-zero emissions by 2050 targets.

Until now, the largest supply deficit in history was less than 1 million mt, which was seen in 2014, John Mothersole, S&P Global Market Intelligence director, economics and country risk, said during the webinar. Mothersole said that even under the most optimistic circumstances there would be a deficit of 1.6 million mt in the late 2020s. A 9.9 million mt deficit would be "untenable," and would precipitate an extreme price reaction, he added.

The consequences of such shortfalls are not insignificant, the analysts cautioned. Copper scarcity may emerge as a key destabilizing threat to international security, they said, adding that the geographic concentration of copper resources and the downstream sector could hone the dangers.

Among the areas to watch are the strategic rivalry between the US and China, the vulnerability of supply chains, governments in countries with mines seeking an increasing share of revenues, and a resurgence of resource nationalism, the analysts said.

US demand is expected to rise, but its share of mine production and refining capacity will not, the analysts said, no matter the ambitions in copper and critical minerals of the Biden administration and Congress.

In the US, "the nexus between a politicized regulatory process and the ubiquity of litigation makes it unlikely that efforts to expand copper output" will succeed, they said.

US mining's status in the supply-demand variables used to be very different, Mothersole said during the webinar, as it was seen as the "Saudi Arabia of copper" for much of the 20th century.

And the US will remain heavily dependent on imports, having to source more than 50% of its refined copper needs overseas no matter the scenario formulated, the analysts said, potentially heightening tensions with China, the dominant refiner globally.

The top two producers of mined copper—Chile and Peru—account for 38% of world production. In 2020, China alone accounted for almost half the refined copper produced globally.

The report noted that copper remains one of the most underappreciated metals or critical minerals, although Yergin noted that leaders of industrialized nations demonstrated growing awareness of the challenge the energy transition poses with the launch of the Minerals Security Partnership last month.