At least three fourths of European banks are failing to disclose the material impacts of climate and environmental risks to the global financial system, even though half of them have acknowledged exposure to such risks, an update of European Central Bank's (ECB) initial assessment of such reports concludes.

Released 14 March, the report looks at disclosures made in 2021 at 109 banks that fall under the direction supervision of ECB in an update to findings it released in November 2020.

Whether this is due to the lack of a common global baseline among banks is unclear from this assessment. However, ECB did note that the International Financial Reporting Standards Foundation created the International Sustainability Standards Board with the idea of delivering a global baseline of sustainability-related disclosure standards that provide investors and other capital market participants with information on companies' sustainability-related risks and opportunities.

As the US Securities and Exchange Commission (SEC) is set to release its own proposal on 21 March for mandating climate risk disclosures, the assessments of European banks is a good reminder of the challenges regulators face in seeking such reports. The SEC has been asking companies to comply with existing US guidance since last fall.

Net-zero pledges not backed up

In the ECB's assessments, nearly a third of the banks that have committed to aligning their exposures with the Paris Agreement "do not provide any information to back this up."

Elaborating further, the ECB noted that only about one in five institutions disclose the methodologies, definitions, and criteria for all of the figures, metrics, and targets reported as material.

In fact, "the ECB's benchmarking shows that institutions have systematically failed to establish a clear link between their stated carbon emissions goals for 2050 and their concrete actions in the present and medium term."

This is despite the fact that about 30% of the institutions whose disclosures are analyzed in this report are part of the Glasgow Financial Alliance of Net-Zero, which is committed to adapting business models to help with the energy transition.

Acknowledging that heightened public awareness is requiring greater and more stricter disclosures from the bloc, ECB said, "Banks therefore need to adjust their practices without delay."

Investors in European banks themselves and investors who provide capital through European banks are pressing for capital allocation to assets with lower climate risk, S&P Global Financial and Capital Markets Executive Director Peter Gardett told Net-Zero Business Daily. European banks have been leading underwriters of green bond debt, and have stepped back from oil and gas lending over the past two years, S&P Global data shows.

According to Gardett's analysis of green bond debt, all new funds that were launched in 2021 in Europe and North America factored in the risk posed by climate-fueled events.

"Back-office data practices are clearly lagging front-office client servicing at European banks," Gardett said. "European banks may not have built out the reporting infrastructure the ECB would like to see, but they have been active in funding energy transition projects that will reduce climate risk over time."

Gardett is confident European bank reporting standards eventually will reflect the shift in the market. "Regulators have been playing catch-up throughout the capital transition of the last few years, and are only now really setting in place the reporting architecture they want banks to implement," he said.

The stricter regulations include those coming from the European Commission that are yet to be adopted as well as the European Banking Authority's binding standards on Pillar 3 disclosures of environmental, social, and governance risks.

The Basel Committee on Banking Supervision, the primary global standard-setting organization for central banks, recently concluded a public consultation on draft supervisory principles for the prudential treatment of climate-related risks. They are using the feedback they received to finalize supervisory principles.

In April 2021, BCBS said uncertainty about the nature of climate change and lack of data, especially from banks, hinder the ability of central banks to estimate and quantify the risk that climate change poses to the financial system.

The banking sector is potentially exposed to the risks posed by climate-driven severe weather events, which, for instance, have caused billions of dollars in damage to properties, businesses, and infrastructure. These have, in turn, affected the portfolios of banks and other institutions.

These risks can either be felt directly through severe weather events or as indirect transition risks driven by changes in policy, advances in technology, or a combination of both.

Pricing risk is an important function of financial institutions to support informed and efficient capital allocation.

"The accurate and timely disclosure of current and past operating and financial results is central to this function," Frank Elderson, member of ECB's executive board and vice-chair of its Supervisory Board, said in a speech delivered to the 14th European Bank Institute Policy Webinar on the ECB's supervisory approach on climate-related and environmental risks.

The ECB carried out its assessment based on a list of 13 expectations that the Banking Supervision outlined in its 2020 climate risk guidance. These expectations cover not only the content of the disclosures, but also the policies, processes, methodologies, definitions, and criteria.

No common threshold for materiality

Although there is no common threshold for assessing materiality, the ECB in its guidance said "it is important that institutions conduct an assessment tailored to their business model and risk profile over short and longer time horizons."

Compared with the three quarters of banks that failed to disclose materiality, ECB said the quarter of banks that did disclose risks to credit and operations did so at a very high level without revealing any of the underlying analysis.

Moreover, six out of ten banks in the sample did not bother to explain how transition risk or physical risk could affect their strategy. 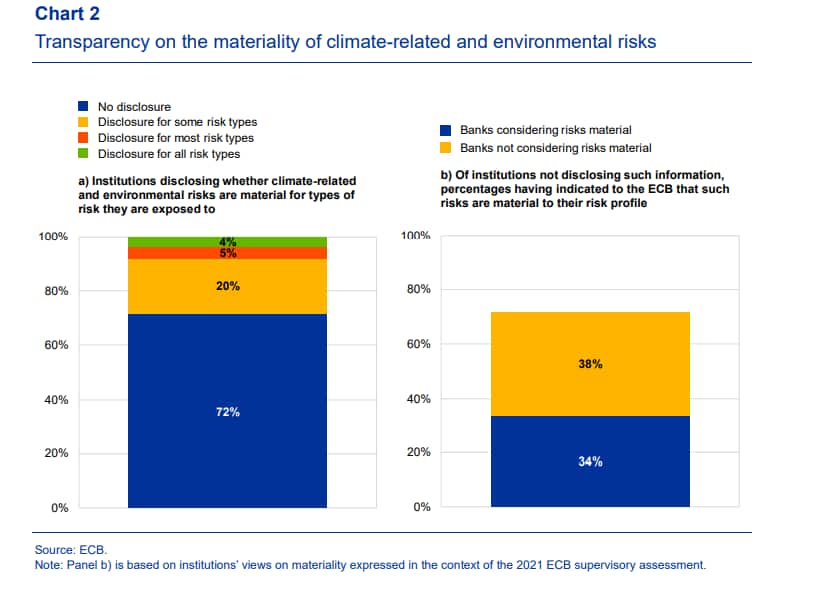 Banks also fell short in in disclosing the metrics they are using to identify climate risks, despite the ECB's recommendations to the contrary.

According to the ECB, "substantiating disclosed figures, metrics and targets in terms of the underlying methodologies, definitions and criteria helps to give market participants a full picture of the institution's risk profile. This, in turn, can limit reputational and liability risks. Moreover, it allows for better comparison of disclosures across the board."

However, only half published key performance or risk indicators on climate and environmental risks.

Although Scope 1,2, and 3 emissions were disclosed by all institutions, the ECB said only two banks captured financed emissions within Scope 3, while the rest focused on their own operations.

Scope 3 financed emissions cover the GHGs released along the entire value chain of business activities, including those of counterparties linked to lending portfolios. Scope 1 refers to direct GHGs released by the banks, and Scope 2 refers to the emissions associated with the power the banks produce for their operations.

The ECB said the few that did report on Scope 3 emissions did not reveal whether they had subjected their findings to third-party audits.

Moreover, portfolio-aligned metrics are revealed only for a quarter of the surveyed institutions that only cover a limited number of carbon-intensive sectors, such as oil and gas, cement, iron, automotive, and power generation.

"As I have said before when discussing the supervision and prominence of climate-related and environmental … we can only tackle a problem once we get a good grip on its shape and size. Some information may be uncomfortable to face up to -- but bringing it to light is the first step in making progress," Elderson said.