It found that net-zero targets covered 88% of global emissions, 85% of the global population, and 90% of global GDP.

But Richard Black, a senior associate at the ECIU said the data showed "huge variations in the robustness and credibility of these targets."

Both dependence on an unspecified amount of carbon offsets and a lack of carbon sequestration projects were glaring issues, the analysis found.

Most countries (55%) set a net-zero goal date falling after 2050, while 44% targeted the prior nine years, and all countries had interim targets.

While all but 12% of countries had proposed net-zero target policies, far more of the net-zero plans (43%) remained in policy plans than had been made into binding laws (10%). 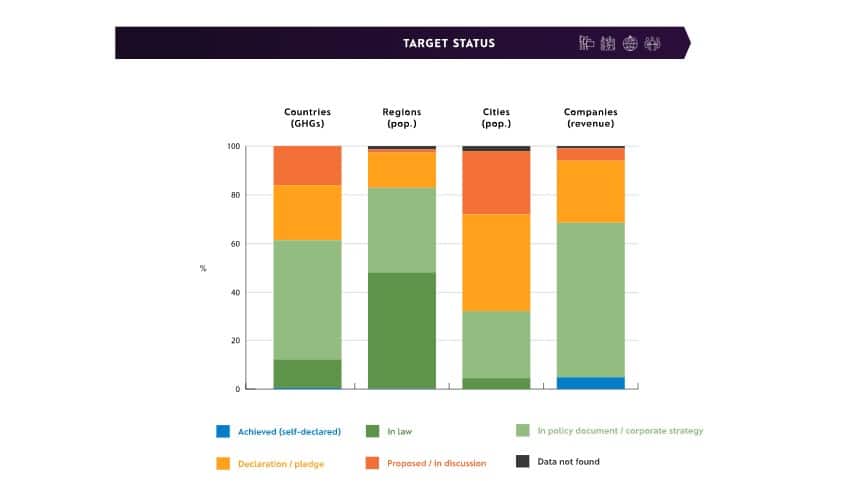 Despite a COP26 agreement on Article 6, enabling a possible global carbon market and wider use of offsets to help countries reach their Paris Agreement targets, concerns linger about offsets' effectiveness.

But they observed dilemmas for users of forest offsets. For example, one company alone has pledged planting 50 million hectares of forest, requiring 10% of the total global land available. In other cases, forests are being cut down as fast as they are being planted.

Also hampering the effectiveness of the forest offsets are wildfires, such as those in the US this summer that burned forests used for offsets by companies such as BP and Microsoft. Russia, which offsets a quarter of its national fossil fuel emissions using its forests, also experienced fires.

Speaking at the EU's COP26 side event on barriers to net-zero last month, Aarti Gupta, a professor Wageningen University & Research, said countries' failure to clarify their dependence on offsets was a net-zero "blind spot."

Almost all countries (91%) with net-zero plans have not confirmed whether or not offsets will be used to meet them, according to Net-Zero Tracker. "Our point of departure in this question is that there is a need for greater transparency around this aspirational use of negative emissions in countries' long-term climate strategies," agreed Gupta.

"There are a range of questions around these negative emissions technologies, some of which are quite speculative, such as which ones will be used and at what scale, are they scalable and will they be available at timescales needed? And [there are] a lot of questions around the permanence of sequestration, around trade-offs with land use for food security, biodiversity," Gupta said. 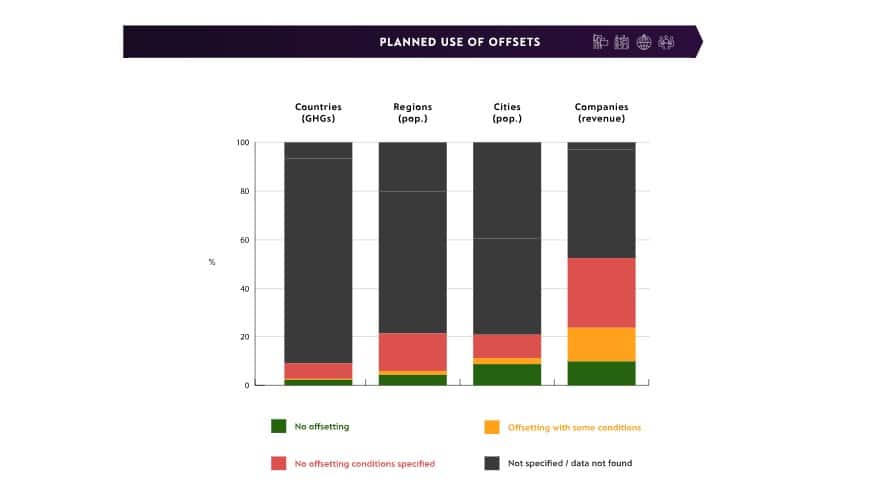 Companies should focus on Scope 3 instead

Non-profit Carbon Market Watch noted in a recent blog that some companies treat their own progress towards decarbonization as offsets, even though it creates no added climate benefit, aka additionality, because the decarbonization would have occurred anyway.

Companies that outlined their plans were heavily dependent on natural and forestry-related activities.

While some large companies in the Net-Zero Tracker analysis did not plan to use offsets to reach net-zero, those that did often failed to specify any conditions on their use, which it said showed "a trend towards using offsets improperly, instead of up-front action to cut near-term emissions."

The analysis suggested that companies cut carbon directly to make the best use of existing carbon sinks, rather than buying offsets. Hundreds of countries at COP26 pledged to stop deforestation in a bid to boost the preservation of existing forests as carbon sinks.

"We are seeing a huge number of net-zero plans that keep the door open to buying offset credits. That is worrying because the market is awash with cheap credits of dubious quality. We can't offset all the way to real, global net-zero. Leaders need to prioritize cutting their emissions and set out clear rules and limits to their offsetting," said Steve Smith, executive director of Oxford Net Zero, an Oxford University research initiative collaborating on the Net-Zero Tracker project.

The cuts should be achieved on a basis that includes the products companies sell, also known as the Scope 3 basis, which has been partially adopted by energy companies like BP and Shell. "To realize net-zero, firms must urgently shift to the 'set menu' -- tracking and tackling Scope 3 emissions, where the broadest opportunities for greenhouse gas emission reductions lie," said Angel Hsu, director of Net-Zero Tracker partner Data-Driven EnviroLab.