Tougher GHG emissions reductions goals for 2030 announced by the US, Japan, and several European countries this spring could breathe new life into the combined heat and power (CHP) industry, say observers.

Also known as cogeneration, CHP is defined by the US Department of Energy (DOE) as "the concurrent production of electricity or mechanical power and useful thermal energy (heating and/or cooling) from a single source of energy."

A CHP gas turbine system, for example, can capture 70% or more of the energy potential, according to the CHP Alliance, a US-based trade group. An advanced gas-fired, combined-cycle turbine alone can operate at an efficiency of about 50%.

"CHP is part of the solution," said Lynn Kirshbaum, deputy director of the CHP Alliance. "Due to its greater efficiency, CHP can help reduce carbon emissions from natural gas power systems. What's exciting is that going forward … you can use biogas, renewable natural gas, and green hydrogen to even further reduce emissions."

In the US, DOE says that CHP is installed at more than 4,400 commercial, industrial, and institutional facilities and represents more than 81 GW of electrical capacity, nearly 8% of the overall figure.

The CHP Alliance believes the use of CHP can be more than doubled by 2030 to 200 GW, or 20% of US power capacity, to help meet the stated goal of President Joe Biden to reduce total US GHG emissions by 50-52% from a 2005 baseline.

Not only is CHP efficient in terms of co-producing power and steam, but Kirshbaum said it is flexible enough to be used on an industrial scale as well as for commercial buildings and multi-unit residences, and even down to microgrid applications. Based on a study conducted for the CHP Alliance, the technology provides 37% of the power capacity of microgrids in the US currently, Kirshbaum said.

Across the US, cogeneration units serve military installations, universities, and hospitals because they provide reliable, resilient service at low cost. "These can go into idle mode when not needed, but then they can power a microgrid for days at a time," Kirshbaum said.

As an example, when Texas experienced statewide blackouts for multiple days in February, the Thermal Energy Corporation's CHP system kept the Texas Medical Center in Houston going without a hitch, she said. The Texas Medical Center is home to the world's largest children's hospital and cancer hospital, as well as being the eighth-largest business district in the US.

"We see applications across the scale—even for industrial [operations] that have to have thermal heat and are tough to decarbonize," she said.

As with the US, CHP is familiar and proven technology in Europe, said Deborah Mann, IHS Markit research and analysis director, global gas. "Everyone is realizing that decarbonizing power is not enough to reach climate targets, and other sectors such as heating and industrial processes will have to contribute," she said.

The directive went into effect in 2012, with a goal of improving energy efficiency by 20% by 2020 throughout the energy chain, from generation to transmission, distribution, and end-use consumption. It was amended in 2018 to set a goal of a 32.5% efficiency reduction by 2030 from a 2007 baseline, and the cuts could be increased again as Europe seeks ways to meet its new target of 55% economy-wide emissions reductions by 2030 and net zero by 2050.

The EC has started a process to assess how the Energy Efficiency Directive can be revised to support the new climate goal, with a "roadmap" published in August 2020. That roadmap acknowledged that "progress in achieving the 2020 targets has been slowing down due to the increasing energy consumption trend since 2014," which suggests that greater efficiency would be promoted. Stakeholder input on that roadmap is being evaluated now.

COGEN Europe, a trade group with 26 members, published a study in April that found there was significant room left for CHP technology to replace power-only and heat-only systems across Europe. "Optimizing CHP as part of integrated energy systems leads to an energy system cost reduction of €4.1-€8.2 billion and [could] reduce remaining CO2 emissions by 4-5 million mt CO2 annually in 2050, as part of a net-zero emissions Europe," COGEN Europe wrote. "CHP will displace less efficient power-only and heat-only generation, contributing 13-16% of total power and 19-27% of total heat production in 2050."

CHP systems will be especially valuable during times of peak demand for residential and commercial heat pumps and for charging electrical vehicles, as transportation is increasingly electrified in Europe. When those demand peaks coincide with insufficient wind and solar power generation, COGEN Europe says systems fired by gas, biomass, or hydrogen could be the answer.

"The study … indicates that there is a cost-effective potential for 40 GW of additional cogeneration capacity to be built between now and 2050," said Hans Korteweg, COGEN Europe managing director. "This will bring efficient, flexible and affordable power and heat to hundreds of cities and industries, as well as millions of citizens."

The benefits of cogeneration have been recognized for more than two decades in the US, said Alex Klaessig, research and analysis director, global gas, IHS Markit. Ironically, the past investment in cogeneration dating back to the Public Utility Regulatory Policies Act (PURPA) of 1978 has created limits on future expansion, he said. PURPA and how states interpreted it incentivized waves of CHP construction that peaked in 1990 and again in the early 2000s (see graph). 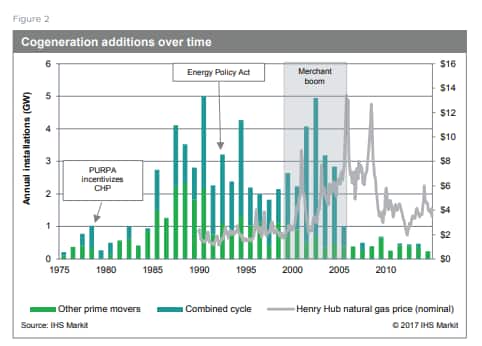 Industrial applications were particularly attractive because they could be scaled up to provide large shares of steady heat for chemical production, refining, paper manufacturing, and other uses. The problem is that expansion in those industries slowed to a crawl in the US. 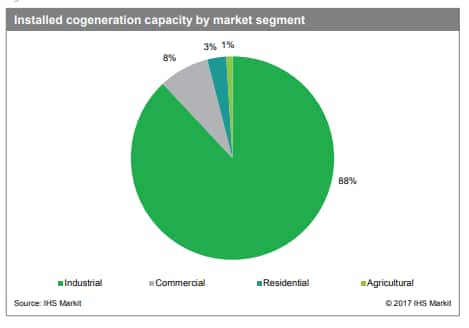 In a report he wrote in 2017, Klaessig asked "Can cogeneration come back?" His conclusion then was that the large industrial sites that could benefit from cogeneration have already installed facilities, and that the next step in the technology's evolution would be smaller applications.

In a discussion in May 2021, Klaessig said conditions have not changed. "We're not going to see new 400-500 MW cogen facilities in the US. There are a few new industrial operations being built, such as some petrochemicals capacity in the Gulf Coast or Appalachia," he said. "But mostly, it's built out. I expect we would see cogeneration facilities in the range of 10-20 MW or smaller."

Because of the substantial upfront costs of cogeneration, Klaessig said facilities with larger heating/cooling and power needs are the best candidates. In particular, the "MUSH" market -- municipalities, universities, schools, and hospitals -- is attractive because they are institutions with long investment time horizons, low cost of capital, and green aspirations. "They are often critical infrastructure and located in congested areas. The microgrid allows the heat and electricity load to be situated onsite," he said.

An emerging market is the large data centers being built across the country, which Klaessig pointed out usually need both heating/cooling and power in a single location. Treatment of wastewater and agricultural waste are other potential markets, including pairing CHP with manure digesters at dairy farms.

On the other hand, the CHP Alliance pointed out that CHP technology can provide reliable power that looks even more critical as renewables are a greater part of the energy mix and system operators look at their options for backup power. "CHP's high capacity factor allows CHP to displace high-emitting marginal grid resources for more hours than would be possible for wind or solar. A CHP unit operating at a capacity factor of 95% can reduce more GHG emissions in about six or seven years as the same capacity of zero-carbon solar photovoltaic does in 35 years," the CHP Alliance said in a report.

For some types of large energy users, such as data centers and hospitals, the ability of cogeneration to provide service for multiple days, rather than four or eight hours, is a major advantage over battery backup.

Additional government support could support investment in cogeneration. But in the US, regulations sometimes create barriers because "utility business models … often fail to value the efficiency and other benefits that CHP delivers," said the CHP Alliance in its report.

An example of this situation emerged this year in Pennsylvania, and the CHP Alliance and cogeneration operators resolved the difficulty after extensive consultation with state officials, said Michael Krancer, a principal and co-founder of consulting firm Silent Majority Strategies. The situation illustrates regulatory impediments that can be found in other parts of the US, he said.

In 2019, Governor Tom Wolf issued an executive order directing Pennsylvania to join the Regional Greenhouse Gas Initiative (RGGI), a voluntary program in which 11 Northeast and Mid-Atlantic states set a cap on emissions from power plants and allow trading of credits. In order to join RGGI, the state had to develop a rule for assigning credits and setting emissions targets for power providers. Pennsylvania's draft rule required that any power plant with a capacity of 25 MW/year or greater had to participate in the program—that is, buy emissions credits. But the draft rule's treatment of cogeneration had an unintended consequence of increasing carbon emissions.

Along came Vicinity Energy, which provides steam and cooling to all the major hospitals in Philadelphia from its gas-fired Grays Ferry cogeneration energy system. Because the system provides up to 160 MW of power, its cogeneration unit is covered under the rule, explained Krancer, who works with the power company. Vicinity Energy estimates its CHP operation avoids over 300,000 st of CO2 emissions annually.

But, as Krancer explained, the proposed rule treated the Vicinity Energy cogeneration unit equally with combined-cycle generators in terms of bidding to sell excess power beyond the needs of its customers to the grid. This rule put the Grays Ferry at a disadvantage because it's located where its steam load is used and not near interstate gas and power transmission lines, so its price for fuel is higher than a traditional combined-cycle generating unit. This means the cogeneration unit would be underbid on the grid for long periods of time in spring and fall, and the unit would fall off the grid, potentially replaced with power from more carbon-intense generating resources.

"When we were replaced, sometimes it could even be by coal power," Krancer explained.

Other Pennsylvania CHP plants are in the same situation, and Vicinity Energy estimated that the state's carbon emissions would increase by 50,000-147,000 st/year under the original proposed rule when the plants' power was replaced by less-efficient operators. Meanwhile, Pennsylvania's Climate Action Plan called for using more cogeneration in order to achieve savings of up to 500,000 st/year of CO2 emissions.

Ultimately, Pennsylvania regulators recognized the disincentive, and they changed their regulation's treatment of cogeneration units to reflect the increased efficiency and carbon emissions avoidance attributes.

"Pennsylvania's Department of Environmental Protection is the first state in RGGI to do this. It took a lot of courage and smarts," Krancer said. "Pennsylvania should be a model for RGGI and for all cap-and-trade programs."

In addition to regulatory changes, the CHP Alliance believes that power purchasers that are not in the power business -- the MUSH sector and others -- could be better supported by the financial community and utilities in making upfront capital investments to recoup the long-term benefits of CHP.

"The CHP technology has been around for a long time. It works—we have the data," said Kirshbaum. "Voluntary programs like RGGI and regulations should recognize the benefits in energy efficiency and emissions. And as we have new applications, like green hydrogen, its value will increase."