Solar became more prominent in the EU energy mix over the last three years and now generates a record 10% share of power across the bloc during the peak summer months, led by rising output in the Netherlands and Spain.

Nonetheless, that figure is still surpassed by the share of power generated by coal plants in the same period (14%), according to analysis of solar power markets compiled by UK-based energy think tank and non-profit Ember.

However, coal's generation for those summer months remained higher at 58 TWh.

Not only the bloc, but also eight EU countries set a new solar record share during the summer peak this year: Estonia, Germany, Hungary, Lithuania, the Netherlands, Poland, Portugal, and Spain.

Estonia and Poland installed large amounts of solar for the first time, reaching 10 and 5% of their generation stacks, respectively, during the peak months, Ember said. 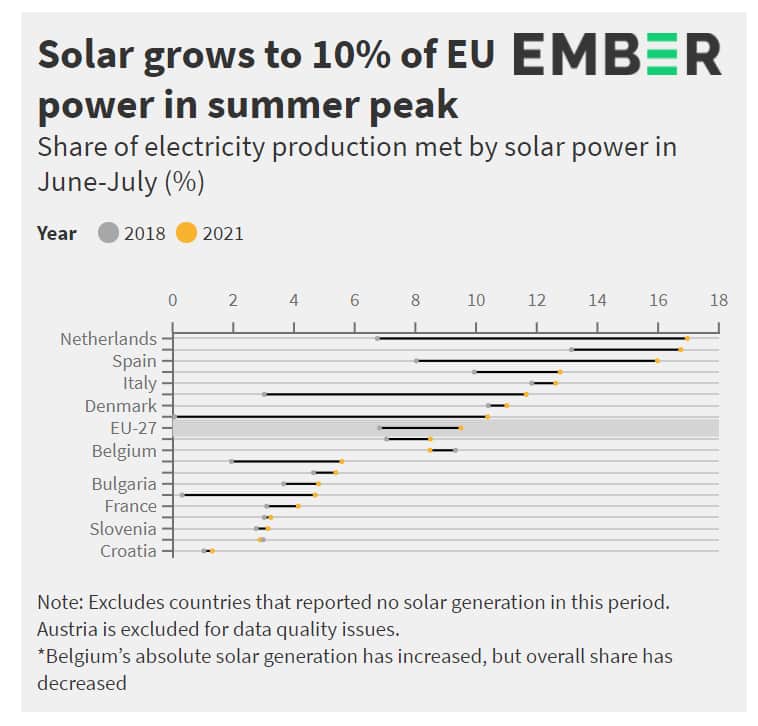 Over the past three years, some of the biggest leaps in solar development came from Spain and the Netherlands. Spain has seen a surge of interest from international investors amid national auctions and power purchase agreement (PPA) deals in the past few years.

In addition, Hungary quadrupled the proportion of renewable energy in its mix in these peak months between 2018 and 2021. Looking at Hungary's generation stack over the period, solar power increased to 12% of the mix as coal power fell to 10%.

The move towards solar contributes to a broader shift of European states away from coal, Ember said. But solar has a long way to go before it reaches the level required for the EU to meet its recently adopted emissions reduction target of 55% by 2030. "Even while the EU breaks solar records it is about half of what it must be in the next decade," Ember analysts wrote.

However, European solar developers are well-positioned for success as solar's levelized cost of energy (LCOE) is half the LCOE of existing fossil plants in large markets like Germany, the UK, Italy, France, and Spain.

Lower costs have been enabled by the decline in average installation costs, for which utility-scale solar photovoltaic dived from $381/MWh in 2010 to $57/MWh in 2020. The LCOE of solar PV shrank faster than the cost of concentrating solar power and much faster than both offshore and onshore wind power, Ember data shows.

Analysts caution that the EU must regulate and incentivize to deploy more solar, for example through the "Fit for 55" policy package currently making its way through the EU's ordinary legislative procedure.

"Weather extremes across Europe this summer have given governments an urgent wake-up call and now they must turn climate targets into climate action by stepping up solar deployment," said Charles Moore, Europe lead analyst for Ember.