The US Department of Treasury's insurance arm is seeking comment on its role in collecting data and taking action on risks that the insurance sector faces as losses from climate-related disasters reach into the billions.

The move is based on Treasury's assessment that climate risks have the potential to disrupt national financial stability.

Treasury's Federal Insurance Office (FIO) issued a 31 August notice, responding to President Joe Biden's 20 May order on climate-related financial risk, that seeks to better understand which data are needed to assess the climate risks faced by the insurance sector, what data remain unavailable, and how can it collect this data to make it available to stakeholders.

The FIO also is seeking input on the specific types of data that would be needed to assess climate-related financial risks to the insurance sector, along with the challenges posed in the collection of such information.

"The increased frequency and severity of climate-related disasters, as well as the magnitude of associated insured losses, highlight the significance of these climate-related financial risks and the role of insurers in responding to them," the FIO wrote.

The agency cited the recently released Intergovernmental Panel on Climate Change report that underscored the need for immediate action after a summer that has seen wildfires blaze in California, heatwaves grip the Pacific Northwest, floods inundate New England, and Hurricane Ida make its way this week through the US Northeast after ravaging communities in Louisiana, Mississippi, and Alabama.

Insurance companies in the US are broadly regulated by states, but the FIO has limited oversight power designed to prevent otherwise unexpected risk from building up across the national insurance system. FIO also plays a role in representing the US to the international insurance industry, which outside the US is often regulated at a national level. State-level approaches to climate change risk reporting are inconsistent.

A lack of available data complicates FIO's ability to conduct such assessments, the agency said. The FIO was created under the 2010 Dodd-Frank Wall Street Reform and Consumer Protection Act following the subprime mortgage crisis to monitor all aspects of the insurance sector, including identifying issues or gaps in the regulation of insurers that could contribute to a systemic crisis in the insurance sector or the US financial system.

In addition to their role as insurers, companies in the insurance sector are major participants in securitized financial markets, acting as buyers of financial products that are also increasingly seen as mispricing climate change risk. According to the notice, the US life insurance sector is one of the largest investors in US capital markets, with more than $4.7 trillion in investments held in general accounts at the end of 2020.

"Over and over, we've seen that insurance companies act as key risk transfer mechanisms for the global financial sector, and that mispriced or unmonitored risk can build up in insurance company portfolios," IHS Markit Climate and Cleantech Executive Director Peter Gardett said. "If the US is serious about tracking and managing national climate change risk to the financial system, it needs to be able to see what is happening at insurance companies."

US Secretary of Treasury Janet Yellen called the filing of the Federal Register notice "an important step" toward understanding climate-related financial risks facing the insurance sector. The FIO said it will accept comment until 15 November on its request for information.

"Ensuring consumers have adequate information, and that the insurance industry is appropriately assessing climate-related financial risk, is essential as we work to address the climate crisis," said Yellen in a statement accompanying the notice.

No federal collection of climate data

Noting that no federal authority was collecting climate-related financial risk data from the insurance sector, the FIO said it was engaging with the National Association of Insurance Commissioners (NAIC) and state regulators on climate-related issues. To date, it said, six states—California, Connecticut, Minnesota, New Mexico, New York, and Washington—use the Insurer Climate Risk Disclosure Survey developed by the NAIC with insurers they regulate and that annually report $100 million or more in premiums and annuity considerations.

The US Securities and Exchange Commission also is in the throes of writing a climate risk disclosure rule for publicly traded companies, including those belonging to the insurance sector. Like the FIO, it also asked about current disclosure practices, what metrics it should use, and whether the disclosures should follow global guidelines recommended by the Task Force on Climate-Related Disclosures.

In comments to the SEC on its rulemaking efforts, Mike Kriedler, Washington state's insurance commissioner, said the parameters for respondents to the NAIC survey, which has been in place since 2009, capture about 70% of the US insurance industry, which comprises about 6,000 individual companies.

The NAIC is currently considering dropping this threshold to $50 million, he added.

The Biden order that the FIO is responding to highlighted how the intensifying impacts of climate change present a physical risk to assets, publicly traded securities, private investments, and companies, such as increased extreme weather risk leading to supply disruptions. He also noted that the global shift away from carbon-intensive energy sources and industries presents a transition risk to companies, workers, and communities.

In 2020 alone, the National Oceanic and Atmospheric Administration (NOAA) reported the US suffered $95 billion in losses from 22 weather- and climate-induced events. As of July 9, NOAA is reporting there have been eight weather and climate disaster events with losses exceeding $1 billion each so far in 2021. This data does not include the impact of recent wildfires or Ida. 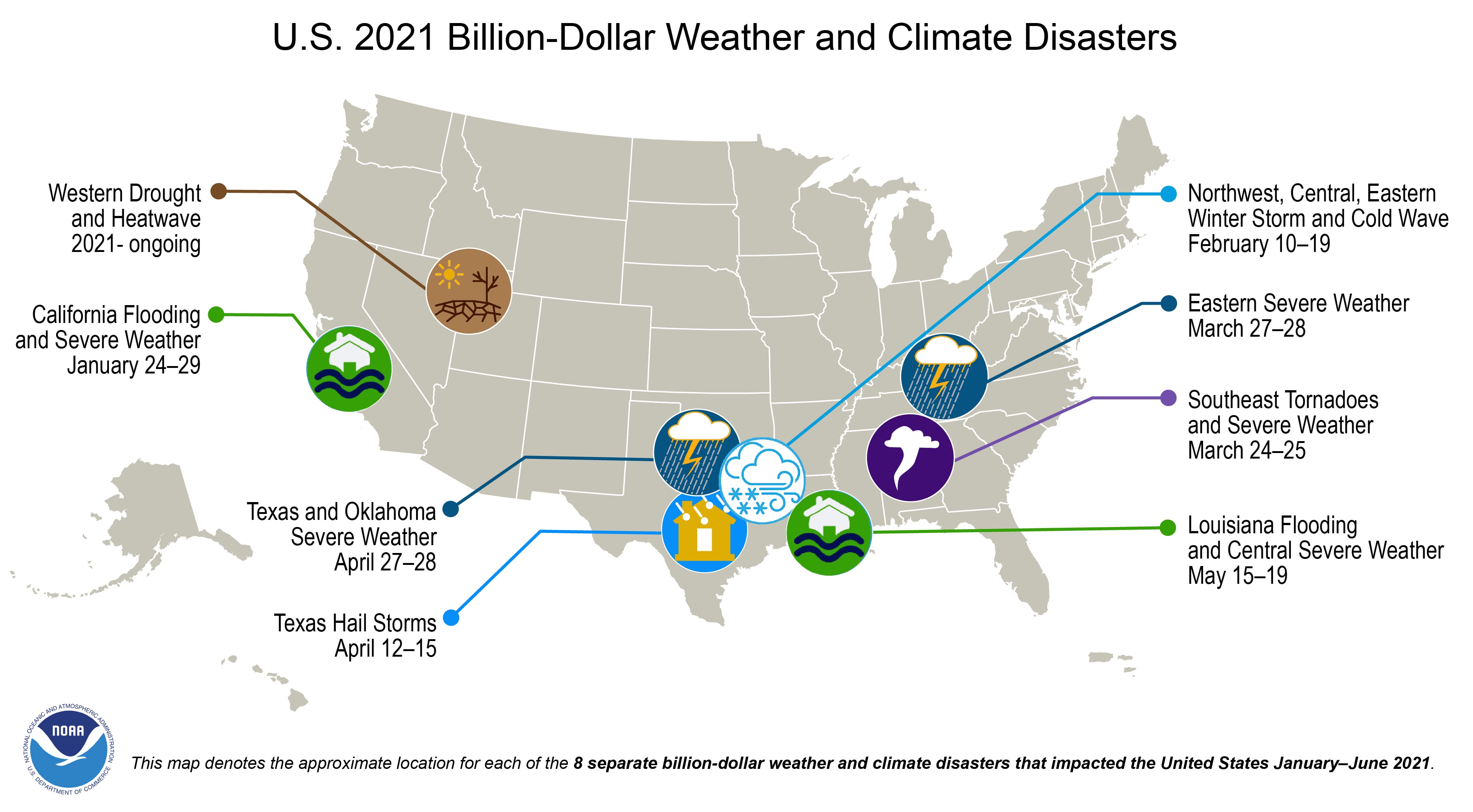 Since 1980, the US has sustained 298 weather and climate disasters where overall damages have exceeded $1 billion and total costs surpassing $1.975 trillion.

"Over the past 30 years, the incidence of natural disasters has dramatically increased and the actual and future potential cost to the economy has skyrocketed. We are now in a situation where climate change is an existential risk to our future economy and way of life," Yellen said in the statement accompanying the notice.

Yellen already has taken steps as the chair of the US Financial Stability Oversight Council (FSOC), of which the FIO is a non-voting member, to address climate-related financial risks. The FSOC also was created under the 2010 Dodd-Frank law to identify and monitor risks as well as to respond to emerging threats to financial stability.