China weathered COVID-induced lockdowns in 2020 and resumed its dominance in electric vehicle (EV) sales in 2021 after ceding the crown to the EU a year earlier, while also continuing to source most of its power from fossil fuels.

More EVs were sold in China in 2021 than the entire world in 2020, the International Energy Agency (IEA) reported 23 May in its "Global EV Outlook 2022" report.

These included both battery powered EVs (BEVs) and plug-in hybrid EVs (PHEVs), which run on gasoline-powered engines and batteries

Out of the record number of 6.6 million EVs sold worldwide in 2021, China was responsible for half at 3.3 million EV purchases, compared with the 3 million sold around the globe in 2020, the IEA said. BEVs accounted for 82% of 2021's EV sales in China, it added.

The EU and US also saw record sales of 2.3 million and 630,000, respectively, and together with China were responsible for more than 90% of EV sales in 2021, according to the report.

Among the reasons given for the jump in Chinese EV sales were a lack of supply chain issues, smaller-sized cars, and an established charging infrastructure. Those factors, coupled with strong government-mandated targets, have helped propel China's EV sales, the IEA said.

China has set a goal that EVs will make up 20% of all vehicle sales by 2030, and the IEA said that both Europe and China had sales that were closer to 15% in 2021. "But it is quite likely that China will meet this target earlier. This level was already reached monthly in December," IEA Clean Energy Technologies Analyst Leonardo Paoli said during a 23 May webinar accompanying the outlook's release.

However, China also was the world's largest GHG emitter in 2021 with 11.9 billion mt, accounting for one third of the global total. The IEA in an 8 March report on global CO2 emissions attributed the increase in Chinese emissions to a sharp increase in electricity demand that leaned heavily on coal power.

And Chinese researchers published a study in February that found BEVs are emitting more lifecycle CO2 than gasoline-powered motors in parts of northern China, where coal-fired power generation dominates.

The global EV fleet in 2021 consumed about 55 TWh of electricity (about 10% of which was for electric two/three-wheelers in China), which the IEA said equates roughly to electricity demand in the Czech Republic.

The IEA's global EV outlook did not directly tackle the issue of whether EVs are being powered by coal-fired electricity. Rather it noted that "decarbonization of electricity systems is a critical factor to achieve the full emissions reduction potential of [zero-emission vehicles]."

According to Timur Gül, who heads the IEA's Energy Technology division, each country's electricity generating mix is different. China's power mix is heavily dominated by coal, while natural gas provides most of the electricity in the US and Europe.

"There's also a question as regards the time of day at which electric vehicles are being recharged," Gül said in response to a question during the webinar.

An average EV consumes anywhere between 25 kilowatt-hours (kWh) and 27 kWh to travel 100 miles, which in turn is equivalent to 0.1 barrels of oil per year, according to the US Department of Energy's (DOE) fuel economy website.

There's no question that emissions from EVs, even if they arise from coal-fired power plants, are far less than those emitted by gasoline-powered cars (see chart below). 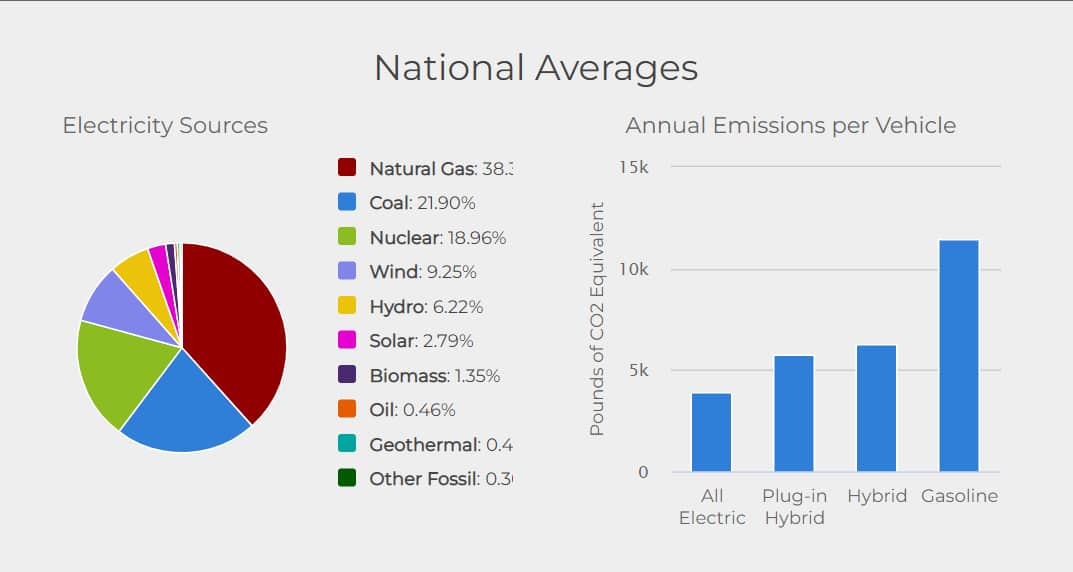 Source: US Department of Energy

IEA in fact projects that electricity demand due to EVs will reach almost 780 TWh in its Stated Policies Scenario and over 1,100 TWh in its Announced Pledges Scenario in 2030.

As EVs become more widespread, demand for charging will increase along with opportunities for utilities to tap into renewables.

That's where the role of governments becomes significant in developing policies to enable deployment of charging infrastructure and development of greener grids.

Unlike the EU and the US, China did not face supply chain issues.

And more than half of lithium, cobalt, and graphite processing and refining capacity also is in China, it added.

Unlike China, the EU, though responsible for more than one-fourth of global EV production is, home to very little of the supply chain apart from cobalt processing at 20%. The US, according to the IEA, has an even smaller role in the global EV battery supply chain, with only 10% of EV production and 7% of battery production capacity.