Asia-Pacific energy companies have approximately 71 gigawatts (GW) of pumped hydro energy storage projects in the planning or construction stages as of the start of 2021, according to IHS Markit's power assets tracking service.

Mainland China is by far the largest contributor, with 52.3 GW of pumped hydro storage under construction or planned. Australia is next in line, with about 7.9 GW of projects. 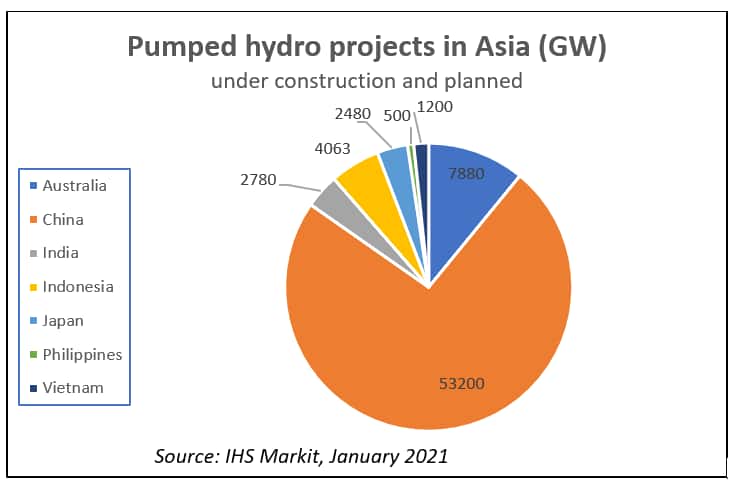 Pumped hydro storage allows excess power to be saved by pumping water from lower to upper reservoirs when electricity demand is low, then releasing it back down to generate electricity when consumption is high—a zero-carbon source of power that will help China to meet power demand while not exceeding its emissions targets.

While State Grid Corp. of China, the largest power provider in the country, and other operators have aggressive pumped storage plans, IHS Markit Senior Research Analyst Megan Anderson Jenkins does not see much room for growth beyond the current pipeline.

"It's important to note the increasing difficulty in construction and development of these projects in China. As suitable project sites are becoming scarcer, development costs are rising," she said, adding: "This is tempered somewhat by local governments who tend to favor large infrastructure projects like pumped storage to boost local economic activity."

IHS Markit is developing a new report, expected this quarter, on China's pumped storage outlook and emerging alternatives as opportunities are tapped. "Overall, we expect the new project construction growth rate to slow gradually until 2040, after which we do not expect any more pumped hydro energy storage capacity to come online. At the same time, battery storage costs will steadily decline, resulting in batteries displacing pumped hydro as the dominant storage technology," Jenkins said.

According to a report by the International Hydropower Association published last year, approximately 158 GW of pumped storage hydropower was operational around the world at the end of 2019. The top three countries account for about half of that capacity: China (30.3 GW); Japan (27.6 GW); and the US (22.9 GW).