Chevron reported that it has reached its 2023 upstream carbon intensity reduction targets three years ahead of schedule, and the company outlined on 9 March a new list of carbon reduction and offset initiatives that it plans to implement in the next decade.

Unveiling the updated climate initiatives as part of its 2021 Investor Day, Chevron did not issue a net-zero target, as have several of its peer group international oil companies, especially those based in Europe. Instead, in their comments and a report released on the same day, "Climate Change Resilience: advancing a lower-carbon future," Chevron executives said they are focused on real-world actions in the next five to 10 years, rather than more general promises at more distant deadlines.

At the same time, the company made it clear that it sees itself operating in a net-zero world. "We support the Paris Agreement, which calls for achieving net-zero [greenhouse gas (GHG)] emissions in the second half of this century," said John Huntsman, a member of the Chevron board of directors and former US ambassador to Russia, in a statement.

In fact, Chevron said its new targets align with the two "global stocktake" periods identified in the Paris Agreement, scheduled for 2023 and 2028, when the signatories will assess progress toward meeting the international goals.

To meet its new targets, Chevron CEO Michael Wirth said the company will invest more than $3 billion in environmental programs by 2028. These are: $2 billion in carbon-reduction projects; $750 million in renewable fuels and carbon offsets; and $300 million to the Future Energy Fund II for advanced technologies (in addition to $100 million already invested in Future Energy Fund I for methane reduction technologies).

"We believe in the power of people working together to advance the technology and innovation that will help address society's highest priorities," Wirth said. "We believe the future of energy is lower carbon, and we intend to be a leader."

The investments will be good for the company's shareholders, as well as for the environment, said Bruce Niemeyer, vice president of strategy and sustainability, in the call with investors. "Achieving our 2028 goals is expected to keep Chevron a top quartile oil and gas producer in terms of carbon intensity," he said.

"The energy industry has been losing investor share to other sectors for a decade, and investors increasingly want both financial performance and societal benefits," said Pierre Breber, chief financial officer. "Higher returns and lower carbon is how we will address both trends."

Chevron's new environmental goals include: reducing the carbon intensity (or the emissions rate per unit of production) from its traditional oil and natural gas development and chemicals processing; increasing the use of renewable biofuels; and raising its investment in advanced technologies, such as hydrogen power and carbon capture, utilization, and storage (CCUS).

With its 2023 goals already met, Chevron announced new, lower targets for 2028, highlighted by a 35% decrease in carbon intensity for oil and gas production, compared with 2016 levels. Also, the company said it would end routine flaring of waste petroleum gases by 2030.

The new targets are shown in the table below.

Chevron said that about 70% of its Scope 1 (direct) emissions can be addressed through energy efficiency measures, switching to lower-carbon gas, buying offsets, or using CCUS. It will also reduce gas flaring and venting, which will especially target methane emissions, which Chevron said account for about 5% of its global carbon dioxide-equivalent emissions at present. Since 2013, Chevron has reduced flaring and associated emissions by 22% from its worldwide operations.

As for Scope 2 emissions (indirect sources, such as imported electricity or steam), Chevron said it will sign power purchase agreements for renewable energy to replace carbon-based energy sources, as well as purchasing offsets. As an example, it cited an agreement to purchase power from a 65-megawatt wind facility in the Permian Basin.

Overall, the company has 60 carbon-reduction projects, with commitments of $100 million, for 2021.

The chart below shows how Chevron is planning to split its emissions-reductions investments in various categories through 2028. 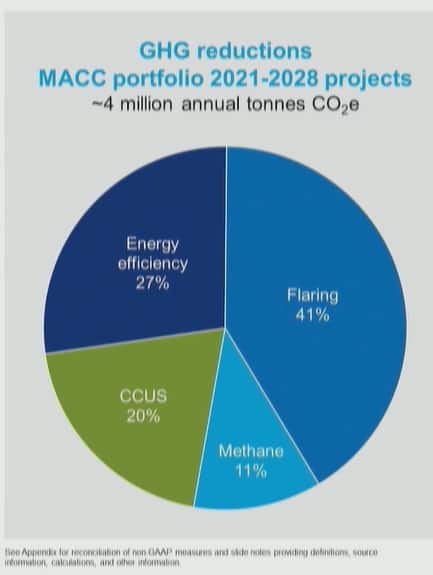 Chevron's plan is comparable to ExxonMobil's plan, which was updated in December 2020. ExxonMobil also has eschewed a big target that's several decades in the future in favor of a plan to reduce its upstream emissions intensity by 15-20% through 2025, along with methane and flaring intensity goals for the same year, according to IHS Markit Associate Director Christopher Elsner.

Elsner's analysis of corporate commitments has found that, so far, two large US-based operators have established net-zero targets: ConcocoPhillips and Occidental Petroleum. Conoco set a 10-year range for becoming carbon neutral in its operations, 2045-2055, and an intermediate goal of decreasing GHG emissions by 35-45% by 2030. Occidental said its goal is net-zero on Scope 1 and Scope 2 emissions by 2040.

Smaller US operators with a large share of their production as gas, such as Pioneer Natural Resources, have also made net-zero pledges.

Biofuels will be a significant part of Chevron's carbon-reduction picture as well.

Chevron said it expects to achieve a tenfold increase in sales of renewable natural gas (RNG) by 2025, and to double its sales volumes of renewable diesel and biodiesel. The company has committed more than $200 million to date in the RNG sector, including an expansion of its partnership with Brightmark, a US producer of dairy-based biomethane, earlier this year.

In California, Chevron's El Segundo Refinery will next year become the first refinery in the US to co-process biofeedstock in a fluid catalytic cracker unit to make gasoline, jet fuel, and diesel fuel with renewable content on a commercial scale. El Segundo supplies more than 20% of all motor vehicle fuel consumed in Southern California, Chevron said.

As of end-2020, Chevron noted that 60% of the Scope 1 and Scope 2 GHG emissions from its operations were in countries developing or with existing carbon-pricing policies, as well as other policies to reduce methane and carbon emissions. "We believe it is a competitive advantage to already operate in a lower-carbon policy environment," it said. 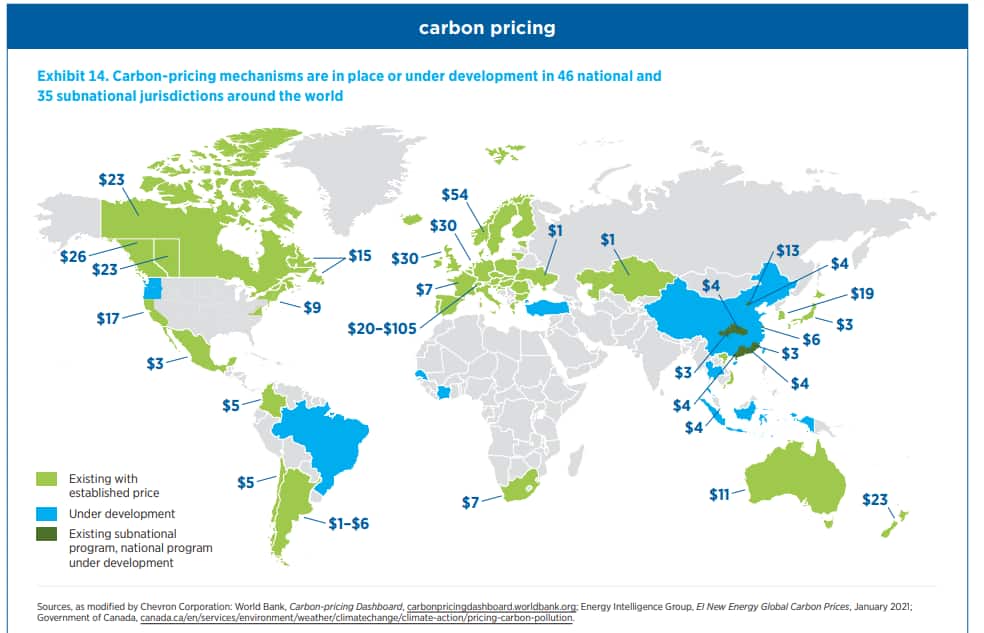 The company also is a participant in carbon offset trading programs in the US, Canada, and Colombia, and is on the advisory board of the newly announced IHS Markit Carbon Meta-Registry, which will debut in the next few weeks. "The Carbon Meta-Registry will provide a network to connect voluntary and government carbon credit programs, market participants, and service providers. It will leverage distributed ledger technology and reduce the risk that credits are counted or claimed more than once," Chevron said.

CCUS also is a key part of Chevron's strategy. It has invested more than $1 billion in Australia and Canada for CCUS research, development, and deployment, said Jay Johnson, executive vice president, upstream. At its Gorgon LNG production and export facility in Australia, "we have injected more than 4 million [metric] tons of CO2, giving us valuable insights into designing and operating world-scale carbon sequestration facilities," he said.

In the US, the company is involved in two CCUS projects in California: the Kern River Carbon Capture Project, a 30 metric tons/day facility that will soon undergo a six-month trial run; and the Mendota Bioenergy with Carbon Capture and Sequestration Project, that has the potential to capture 300,000 metric tons of CO2 per year.

Chevron plans to update its intentions, particularly in the area of investment in technologies such as CCUS and hydrogen power, at its management roundtable in September.

However, CFO Breber noted that Chevron's primary business lines represent only part of the transition to lower carbon needed across the globe and across industries. "Over 90% of [GHG] gas emissions are not related to passenger vehicles. Finding solutions to emissions from manufacturing, agriculture, heavy-duty transportation, and other activities will require technological and commercial breakthroughs," he said.

IHS Markit's analysis of corporate net-zero commitments finds that companies in other sectors are awake to the net-zero future as well. As energy users, not primarily energy producers like Chevron, they have easier paths to zero carbon, and companies such as Microsoft, Levi Strauss, AstraZeneca, Siemens, and SAP have set all-renewable energy purchases or no net-carbon pledges by 2030 or 2040.

"However, even with non-energy firms in relatively low-carbon intensive sectors, we begin to see a divergence in the details and metrics used in the target-setting announcements, differences that could intensify as the company hails from an increasingly emissions-heavy economic sector, particularly across the energy industry," IHS Markit's Elsner wrote.