A modest carbon tax of $25/mt tailored to each country's energy mix and implemented over a 10-year period across the Asia-Pacific region could reduce their GHG emissions by 21%, according to a study by the International Monetary Fund (IMF).

Reducing carbon emissions from Asia and the Pacific is urgent, both for the residents of the region and for the global climate.

Because the region emits half of the world's CO2 emissions (see graph), starting to bend the emissions curve downward is crucial for the entire global population, two of the authors of the report, David Corvino of the IMF Asia and Pacific Department, and Cristian Alfonso of the IMF Fiscal Affairs Department, said in a presentation at the IMF-World Bank spring meetings on 9 April. 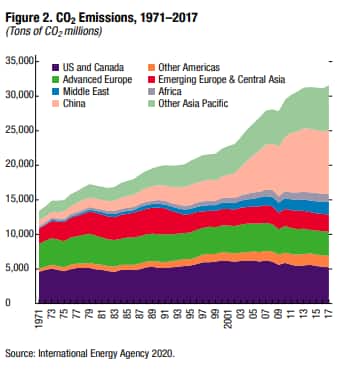 The IMF report said the $25/mt fee or tax though a modest, interim step would still leave an immense gap between emissions trends and the level of emissions that the International Energy Agency has said is needed to limit global warming to either 1.5 degrees Celsius or 2 degrees (see graph).

The study estimates that the carbon tax would have to be $75/mt by 2030 for the region to be on a trajectory to limit global warming to 1.5 degrees. 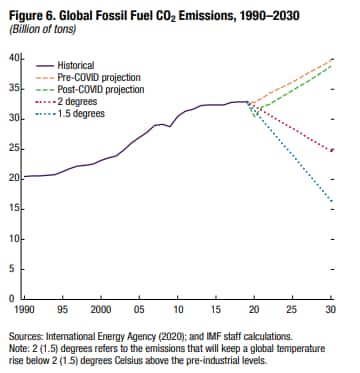 An estimated 1 billion people in Asia and the Pacific are "highly vulnerable" to the impacts of climate change, Corvino said. Already, the cost of weather-related disasters in the region reached $50 billion for the period 2010-2019, topping 0.4% of GDP in some countries (see map). "If nothing is done, things will get catastrophically worse," he said.

If the revenue raised by these tailored carbon taxes is distributed back to households (an estimated 0.8% of regional GDP), it could also enhance economic equality, too, according to the report authors. 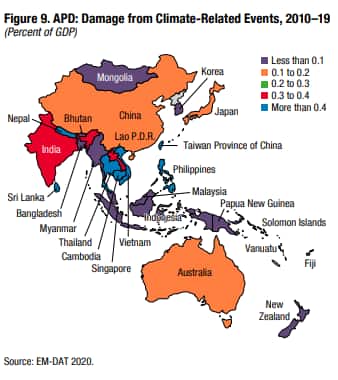 In the region, presently only Japan and Singapore have carbon taxes, and they are quite modest: approximately $3/mt in Japan and $4/mt in Singapore. China, Indonesia, Japan, New Zealand, South Korea, and Vietnam have carbon emissions trading programs (see IHS Markit articles here and here).

The IMF-modeled carbon fee of $25/mt is well below the rates today in France, Norway, and Sweden, but it would sit comfortably in the range of the levels in many European nations and Canada (though some of those countries have increased rates coming under existing law).

While political resistance to a carbon tax has been strong in most Asian and Pacific nations, Alfonso said that Europe's leadership could make a difference. With the EU moving towards imposing border carbon adjustments (BCAs) -- import fees on goods coming from countries without carbon taxes or with tax rates deemed too low -- trade-oriented Asian and Pacific nations will find it in their interest to adopt similar measures, he said.

"By imposing their own carbon taxes, countries in the region would reduce, or eliminate, BCAs on their exports and allow them to keep the revenue themselves. And to boost the global mitigation effort and prevent their own mitigation efforts being undermined, the main emitters in Asia and the Pacific should coordinate with other key global emitters to agree on an international carbon price floor," the IMF report recommended.

EU nations, in particular, have made it clear that they support carbon taxes. "Carbon pricing is, of course, one of the main things that we are using in Norway, because we have seen that it works, we know it is effective. It is a good way to actually make that transition that we know needs to happen," said Norway's Minister of Petroleum and Energy Tina Bru on 2 March at CERAWeek by IHS Markit.

The IMF said it is pushing for a carbon tax because non-tax measures, such as emissions trading programs or regulations, "are generally less effective at reducing CO2 emissions on their own than carbon taxes, due to limited coverage and impacts on energy usage as well as foregone revenues." For example, IMF found that Asian countries with emissions trading programs cover about 50% of national emissions since they exempt vehicles, buildings, and small businesses.

The report stated that carbon taxes should be complemented by "adaptive strategies," which are actions that countries can take to reduce the impact that climate change is having. This is particularly important for Asian and Pacific countries because "it faces the highest climate risks" in the world, especially low-income and Pacific island nations.

"This calls for mainstreaming adaptation into national budgets and fiscal strategies. While some progress has been made … in identifying climate-related spending, most countries in the region have yet to fully cost and prioritize their adaptation plans," Corvino said.

The IMF estimates that Asia-Pacific countries should, on average, spend 3.3% of GDP annually on adaptive actions, such as retrofitting existing climate-exposed critical assets and improving their coastal protection infrastructure. Pacific island nations might have to spend even more. While this is costly, Corvino said "it has high yields over time" in reducing damage, enabling quicker recovery from disasters, and encouraging private investment.