The number of projects to capture and store carbon dioxide emissions will need to increase a hundredfold across the globe if countries are to reach net-zero carbon commitments under the Paris Agreement to mitigate climate change, a report released 1 December concludes.

Right now, there are 26 commercial carbon capture and storage (CCS) facilities that are operational and another 37 in various stages of engineering, design and development, according to a report from Global CCS Institute on the worldwide status and deployment of the technology in 2020.

More than 2,000 such facilities are needed if countries, states, provinces and cities are serious about reaching their net-zero carbon goals by mid-century, Jeff Erikson, the think tank's general manager said during a webinar accompanying the report's launch. 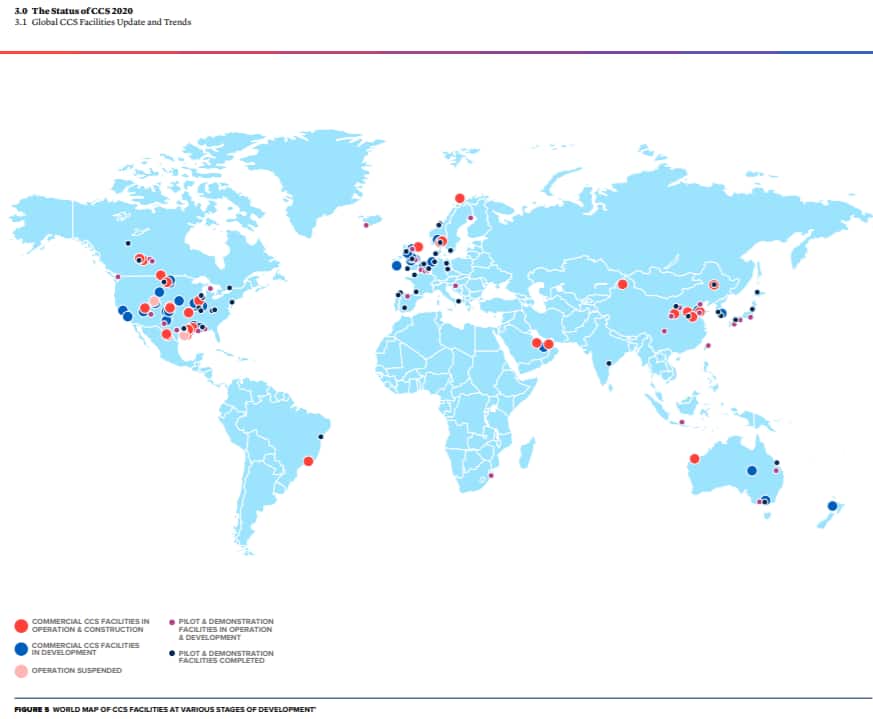 It's "an important and efficient tool" for mitigating climate change, said Norwegian Minister of Petroleum and Energy Tina Bru.

"CCS fits in with the goals and aspirations of COP 26," she said, referring to the upcoming annual meeting of the 197 countries that have signed onto the United Nations Framework Convention on Climate Change.

At COP 26, which is currently scheduled to be held in Glasgow in November 2021, countries are expected to submit their long-term goals to limit carbon emissions in line with the 2015 Paris Accord, which laid out a non-binding goal for all signatories to help curb a global temperature increase of less than 2 degrees Celsius.

Bru agreed with the report's authors that CCS will be one of the key solutions along with renewables for limiting carbon dioxide emissions from heavy industries such as cement, iron and steel and power-generating facilities that are responsible for the lion's share of global emissions.

The cement, chemicals, iron and steel sectors are responsible for about 70% of the eight billion metric tons of direct carbon dioxide emissions that industry releases each year. The report said the share of industrial emissions could go as high as 40% if indirect emissions are added.

More importantly though, "I do believe that carbon capture and storage is important to develop and pursue as there are sectors that have emissions that are hard to abate, such as the industrial sector," Ponciano Manalo, IHS Markit's principal research analyst for the Energy and Climate Scenarios team, said.

There are chemical processes that produce carbon dioxide as a result of the process itself and are hard to substitute out, he said, adding "these sectors need a solution rather than just venting carbon dioxide into the atmosphere.

The 26 active CCS facilities are currently responsible for capturing and storing about 40 mega metric tons of carbon annually. But the report said the size of global carbon storage needs to increase to about 5.6 giga metric tons by 2050 for countries to reach their net zero goals.

"But the past three years have seen strong growth," the report said.

In 2020 alone, Global CCS Institute said 17 new facilities were added to the pipeline, of which 12 are in the United States. This includes a carbon capture and utilization facility that Enchant Energy Corp. is constructing at the 847-MW coal-fired San Juan Generating Station in New Mexico and expects to complete by 2023. Upon competition, this facility is estimated to be able to capture 6 million metric tons of carbon dioxide each year that will transported via pipeline to oil fields in New Mexico and Texas.

The institute included large-scale commercial projects that are designed to capture at least 400,000 metric tons of carbon dioxide as well as pilot-scale projects that many countries in Europe are pursuing.

Manalo said the estimates differ because IHS Markit assessed a shorter timeframe of about five years compared with the 10 years the institute estimated for carbon capture projects and included some of those still in the early development stages. Unlike IHS Markit, the institute also included some projects that capture less than 400,000 metric tons per year of carbon dioxide in its assessment.

Enchant attributes the progress on this project to the US government's 45Q tax credits that provide $35 per metric ton of carbon for capturing at least 25,000 metric tons of carbon for enhanced oil recovery operations. The report said CCS projects in the US have benefited tremendously from federal tax credits and California's Low Carbon Fuel Standard.

In October, the nonprofit Energy Futures Initiative and Stanford University endorsed CCS as a clean technology pathway well suited for rapidly reducing emissions from economically vital sectors, such as steel, cement and chemicals, in California that have few other options to decarbonize.

Investors, though interested in funding green solutions, are not sure they understand how CCS figures in the push for decarbonization, said Zoe Knight, group head of HSBC's Centre for Sustainable Finance.

Financing for CCS projects often slows down because the group involved in assessing the risks doesn't fully understand the concept, she added.

The challenge for investors is to assess risk profiles of loans outstanding in relation to climate factors. She said the European Union's recently developed taxonomy for various industries and activities has helped some, as have climate disclosures by companies.

The Institute urges countries to move away from the traditional model of capturing carbon emissions from a point source and storing it at a site located at a reasonable distance. Countries as well as companies are now looking at the "hub and clusters" concept, where the emissions from a cluster of facilities are compressed and transported. Such an approach results in a distribution of the costs among several different entities with a stake in the project.

One such example is Norway's Northern Lights project, where Bru said carbon dioxide collected from waste-to-energy and cement plants from the Oslo-Fjord region would be compressed into liquid form and shipped to the country's west coast terminal and then piped to an offshore storage site under the North Sea.

Another is LafargeHolcim's partnership to build a commercial-scale CCS facility at its cement plant in Florence, Colorado. Here the company's US cement organization is partnering with Svante Inc., Oxy Low Carbon Ventures, LLC (OLCV), a wholly-owned subsidiary of Occidental, and Total. This project also has benefited from a US Department of Energy grant as the project moves through its feasibility phase.

<span/>Climate economists and analysts agree that countries cannot rely on renewables alone or CCS to meet their net zero carbon goals. They must invest in technologies to capture, utilize and store carbon emissions.

IHS Markit's Manolo said both renewables and CCS solutions are needed at the base level, "at least to address emissions from hard-to-abate industrial sectors."

<span/>"It is not a case of either-or here. It's case of and, and," Guloren Turan, the institute's general manager for advocacy and the report's author said during the webinar, a sentiment that was echoed by Vianney de Buchet, Air Liquide's vice president for energy transition in Brussels.

"There is no one single pathway," de Buchet said, adding "we must explore all pathways."