During this period, Ottawa also will issue its first green bond, with a target of C$5 billion (US$4 billion).

The Canadian budget, which is subject to parliamentary approval, includes significant investments in clean energy programs just as countries are gearing up to raise their climate ambitions in connection with the upcoming Leaders Climate Summit hosted by US President Joe Biden.

Revealed in the proposed budget is a forecast that Canada's GHG emissions will fall by 36% compared with 2005 levels by 2030 if the policies as proposed are put into effect. This GHG target represents a sharper cut compared with the target of 30% designated as the country's nationally determined contribution (NDC) in 2016 and then updated in 2017.

However, Environmental Defence, an advocacy group, stated that the implied 36% GHG emissions reductions cut is inadequate, saying that "Canada's fair share," given its status as a high-emitter nation, is a 60% reduction. 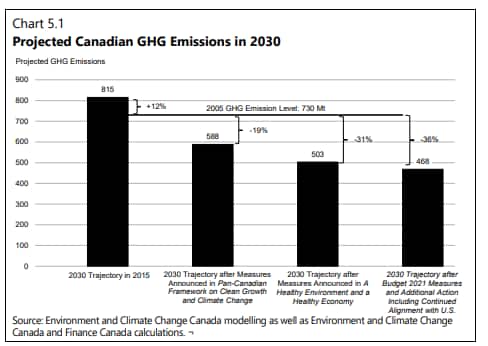 NDCs are a focus of discussion among major economic nations this week, as Biden hosts the Leaders Climate Summit. The US' current NDC is a 26-28% reduction from 2005 levels, promised by the Obama administration; Biden is widely expected to issue a revised NDC, or at least the emissions targets for it, as part of the summit activities (see coverage here and here).

The green programs in the Liberal Party budget include a 50% reduction in income tax rates for businesses that manufacture zero-emission technologies as well as tax incentives to adopt carbon capture, utilization and storage (CCUS).

The budget also includes funding for accelerated investment in clean energy technologies. Tax credits are set to be expanded under this budget request to equipment for pumped storage hydro, renewable fuel production, hydrogen, and some forms of wave, tidal, and geothermal energy projects.

The budget also includes a Clean Fuels Fund of C$1.5 billion and a Clean Electricity Fund of C$77.9 million to ensure 100% renewable energy purchases for federal buildings over time. To support new technology, the budget includes more than C$45 million over three years for a Critical Battery Minerals Centre for excellence and research on minerals processing and refining.

"It is a plan that embraces this moment of global transformation to a green, clean economy," said Freeland, who also has served as the country's deputy prime minister since 2019.

To incentivize private-sector investment, the budget provides C$1 billion over five years for cleantech projects that need "investment at a scale and time horizon outside the scope of traditional project financing."

Canada already has one of the world's highest carbon fees, which rebates 90% of the collected revenue to consumers each quarter as Climate Action Incentive Payments. The budget document states the government will consider adding a border carbon adjustment, as it "will launch a consultation process … in the coming weeks" with provinces and businesses involved in imports and exports.

WaterPower Canada praised the budget, both for support of hydropower and for backing projects to develop green hydrogen from carbon-free hydroelectricity. It highlighted the C$40.4 million for a feasibility study of the Atlin Hydro Expansion Project in Yukon and the Kivalliq HydroFibre Link Project in Nunavut, and a partnership grant with First Nations, Inuit, and Métis communities for C$36 million.

WaterPower Canada added that it supports the expanded investment of C$5 billion ($4 billion) over seven years in the Net Zero Accelerator, which can be used for green hydrogen, among other projects. The accelerator, which was launched in December 2020, now is backed by C$8 billion.

The budget's investment tax credit for capital invested in CCUS projects was backed by energy producers and industrial users, but looked at skeptically by the environmental community. The government said its goal is to reduce emissions by at least 15 million mt of CO2 annually. A 90-day consultation period will be opened soon to design the tax credit, and the budget document states it will not be available for enhanced oil recovery projects.

Environmental Defence said it is concerned about the incentives for the CCUS program. "Without robust conditions, this money could support technologies, including plastic waste-to-fuel projects, carbon capture and fossil fuel-derived hydrogen, that will delay a transition away from fossil fuels and single-use plastics and lock us into decades of increased carbon pollution," it said in a statement on 19 April.

Overall, however, Environmental Defence had positive things to say about the plan. "Budget 2021 contains unprecedented investments to tackle climate change and a range of measures targeting other environmental priorities, including a nearly $500 million reinvestment in the Chemicals Management Plan that will provide an opportunity for improvements to the ongoing evaluation and management of toxic chemicals," it stated.

A week earlier, Environmental Defence issued a report that showed federal government subsidies for fossil fuel industries totaled C$18 billion in 2020, or more than the government's new climate commitment over the next 10 years.

Overall, Canada's new budget includes C$101 billion over the next three years for economic development to rebound from COVID-19 impacts — which was noted as priority No. 1 for the nation. The government foresees budget deficits every year through FY 2026. Those deficits would shrink from more than C$350 billion for FY2020/21 (which ended on 31 March 2021) to C$154.7 billion this fiscal year, to about C$31 billion in FY 2025/26.

The Fraser Institute, a think tank, criticized the government for adding so much red ink. "While emergency spending was necessary to deal with the fallout of the pandemic, COVID-related spending only constitutes a relatively small portion of program spending this year … only 12% will be spent on measures directly related to COVID," it said in a critical analysis.