Brazil's offshore wind sector finally reached the runway in late January, taking a first step toward a regulatory framework, with developers and turbine manufacturers eyeing the prospects for what was already the seventh fastest growing market globally for onshore installations in both 2019 and 2020.

A widening of the generation options in Brazil will be all the more timely given pressures the country's energy production has been experiencing.

Drought last year hamstrung hydropower output, which accounted for 66% of Brazilian electricity production in 2020, leading the Bolsonaro government to call for widespread power conservation in August and September 2021.

IHS Markit data show a flood of proposals ready to answer the government's call to action through a 25 January decree, the first step towards building any offshore wind capacity, with around 80 GW of projects (see below) on the drawing board, although with competition so fierce, some will not advance any further. 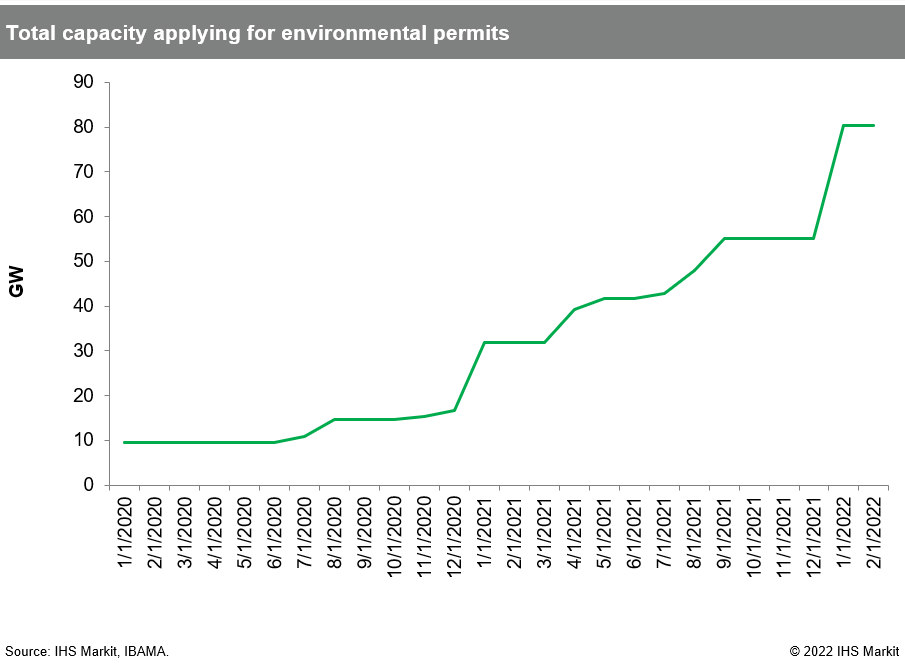 First though, a framework for facilitating those ambitions was required. The government took the first step by issuing the decree creating the conditions for the leasing of seabed in inland waters, territorial seas, and on the continental shelf for offshore power generation.

In the decree, the government tasked the Ministry of Mines and Energy with defining the areas of seabed that will be available and carrying out auctions. The decree said bids will be judged on which ones provide the highest economic return for Brazil, without going into any further detail.

The government will also consider approaches from developers looking to build facilities in areas outside the zones assigned for offshore generation by the ministry, it said.

The size of those assigned areas and when the auctions will be held is as yet undetermined, although in November 2021, Mines and Energy Minister Bento Albuquerque said the first wind auctions would be held in 2022. Albuquerque said at the time that Brazil had the potential to build 700 GW of offshore wind capacity. The ministry was not able to respond to multiple Net-Zero Business Daily inquiries on when the auctions will be held.

The ministry said in a statement 25 January that the decree had been "much demanded." The decree "brings clarity to the mechanisms" for assigning the use of areas between the Ministry of the Economy and the energy ministry, it added.

January's decree is part of a transformation of the Brazilian electricity sector in recent years and will help meet upcoming demand growth, the ministry said. Also, the measure should attract international offshore wind generation developers now that they have legal certainty. The decree will enter force 15 June, and the ministry has 180 days from then to add to the rulebook.

Brazil's potential for offshore wind development is based on the length of its coastline, the depth of waters available, and the strength of the winds that blow off its coastline, especially in waters adjacent to northeastern states.

Some 80% of Brazil's existing 21 GW of onshore capacity is located in the northeastern region, according to wind industry trade association Abeeolica. The trade group expects that total to reach 33 GW by 2026, it said 10 February.

There are opportunities up and down the coastline, Abeeolica CEO Elbia Gannoum told Net-Zero Business Daily 10 February. There is excellent potential in the northeast, she said, but also in the south and southeast of Brazil. Some of the states with waters with favorable wind power potential are Ceará, Rio de Janeiro, Espírito Santo, Rio Grande do Norte, and Rio Grande do Sul, she said.

South Atlantic trade winds will help projects capture higher capacity factors in the northeast of Brazil, with some projects reaching a capacity factor of almost 60%, said IHS Markit's Simon. Projects located in the south and southeast will probably have lower capacity factors, but still present prime quality resources, he added.

The average capacity factor on a blustery 9 February for offshore turbines in the UK, a global leader in the sector, was 51.8%, according to trade body WindEurope.

Industry confidence in Brazil's wind resources is reflected in the geographic spread of the existing applications, said Simon, who is tracking proposed projects in waters off the states of Ceará, Rio de Janeiro, Espírito Santo, Rio Grande do Norte, and Rio Grande do Sul (see chart below for state-by-state applications). 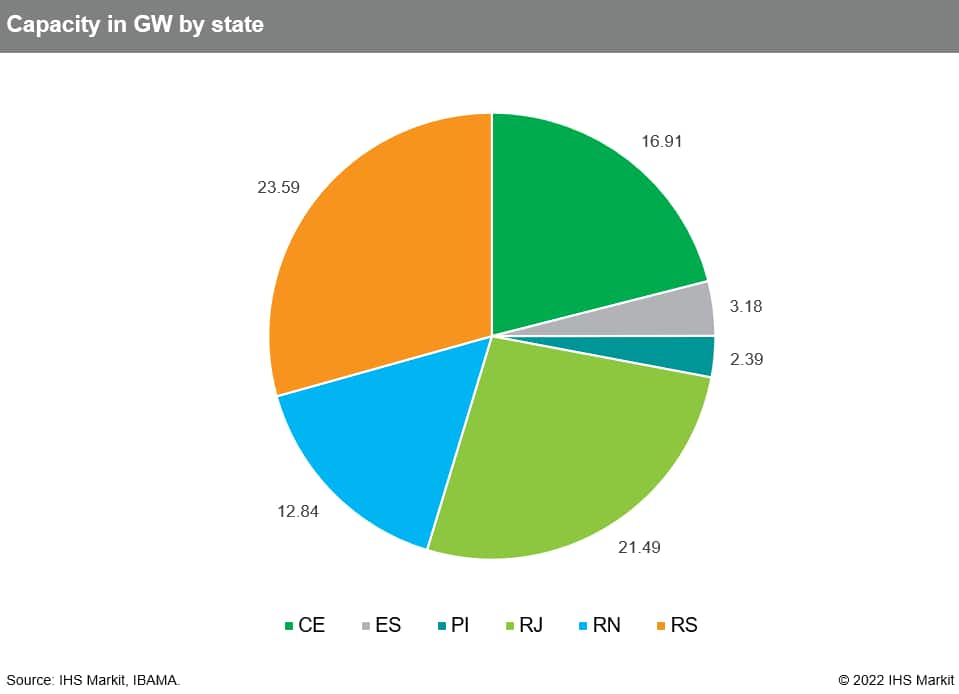 And with those opportunities, global attention is pivoting in Brazil's direction.

The initial guidelines are encouraging, Ferres said, adding: "Introducing offshore wind power into any nation's energy mix is a long-term task, providing both environmental and economic benefits to both society as a whole along with direct energy market players."

Generation developers are also keen to get started.

US-owned AES Brasil, which already has a 4.5 GW generation portfolio, sees the decree as a "very positive signal for the market," the company told Net-Zero Business Daily, adding that the development "showed a willingness … to meet a demand for the insertion of a new technology in the Brazilian energy matrix."

In 2022, the company said it is focusing on building two onshore wind farms, the 322-MW Tucano and 1.1-GW Cajuína projects, but is keen to explore onshore and offshore opportunities. AES Brasil currently operates hydro, wind, and solar facilities.

Meantime, global developer Ocean Winds—a joint venture of Portugal's EDPR and France's Engie—told Net-Zero Business Daily the decree was a move in the right direction and gave offshore wind its first regulatory framework in Brazil. Ocean Winds backer EDPR already has a 436 MW generation portfolio in Brazil as well as more than 1.1 GW of capacity under development in the country.

Despite the world-class resources, the Brazilian offshore wind market requires specific instruments, such as power auctions, for the sector to develop over the next decade, said Simon. The sector also needs further capital influx, as well as operational expenditure reductions, to become more competitive on a broader basis with other renewables sources available elsewhere in the country, he added.

Still, notes Simon, the majority of the 80 GW of applications filed with Brazilian environmental regulator IBAMA are located in shallow waters and will rely on bottom-fixed turbines, making projects more competitive with alternative generation types.

However, the government will not be providing subsidies. Brazilian Ministry of Mines and Energy Special Advisor Agnes Da Costa told attendees of a COP26 event in November there would be no subsidies for any form of renewable power in a country that ranks in the top 10 for emissions on a country-by-country basis, as the cost goes directly on the bills of customers, and bills are already expensive.

The energy ministry's complementary rules will "be key for the business plans of investors in Brazil," said Ocean Winds.

Top-ranked turbine manufacturer Vestas, meanwhile, will be looking for a strengthening of the local supply chain, the transmission system, and the infrastructure, especially the port infrastructure, to meet the needs of both offshore technology and green hydrogen production, it said in an email.

On the demand end, IHS Markit's Simon said green hydrogen producers could become key enablers of the offshore wind market in future years, signing long-term power purchase agreements that can fund the wind projects. He said power producers will also be looking to develop of offshore wind clusters in areas close to the populous southeastern states, where the main demand centers are located, which will also alleviate pressure on the transmission grid.