Oil major BP is to become the biggest shareholder in the Asian Renewable Energy Hub (AREH), a renewable power and green hydrogen project in Western Australia whose electricity output could eventually match a third of Australia's current generation stack, it said.

The project, which BP said has the potential to be one of the largest renewables and green hydrogen hubs in the world, will be built in multiple phases. If BP and its new partners, including developer InterContinental Energy, follow through to completion, AREH would have a combined wind and solar PV generation capacity of 26 GW.

AREH is also expected to be capable of producing around 1.6 million metric tons (mt) of green hydrogen or 9 million mt of green ammonia annually. Should AREH go down the former route, it would make "a material contribution" to BP's aim of capturing a 10% share in "core hydrogen markets" globally, the company said.

Reese said BP taking the reins is a major step forward for the project. BP's know-how on constructing and operating large-scale facilities as well as its experience operating in Australia, including as a part owner of the North West Shelf LNG joint venture off the Western Australian coast, would be a significant advantage, he said.

BP declined to comment on how much it had paid for its stake, but the company's net-zero ambitions—as evidenced by actions in recent months in the hydrogen, electric vehicle, offshore wind, and plastics sectors—are a boon for the ambitious project, said Reese.

The company's political heft as a long-time major employer in Australia—its first oil refinery in the country opened in 1924 and first Western Australian refinery began operations in 1955—is also likely to come in handy.

In June 2021, the project ran into a hurdle when then federal environment minister Sussan Ley said an enlarged 26-GW version of the project would adversely affect fragile wetlands, several species of migratory birds, and violate the Environment Protection and Biodiversity Conservation Act. Ley called for detailed environmental studies.

A BP spokesperson told Net-Zero Business Daily on 16 June that "the environmental concerns identified by the Australian government are being considered by the project design team to find solutions ahead of resubmitting a revised proposal."

That solution has every chance of succeeding, said Reese, who expects the project proposal can be modified to address the environmental concerns, which would allow the project to move forward.

Ley's roadblock came after AREH initially won fast-track approval status from the federal government, receiving a designation of Major Project Status in October 2020. At that time, Minister for Energy and Emissions Reduction Angus Taylor said AREH would build on Australia's strengths as a major energy exporter while helping to reduce global emissions.

AREH "will help us achieve our 'H2 under $2' goal and position Australia as a world leader in clean hydrogen," Taylor added.

That support remains intact. Premier Mark McGowan's government welcomed the BP deal 15 June, adding that it was "another major step forward for the globally significant project." The state government said the project will play a "key role in Western Australia's energy transition."

Hydrogen Industry Minister Alannah MacTiernan said the deal was "a significant vote of confidence for the next stage of development" of the state's renewable hydrogen industry. "The project will transform the Pilbara, create thousands of jobs and be a major contributor to global efforts to decarbonize the economy, and provide the low-cost energy to underpin downstream processing of our mineral wealth," she added. 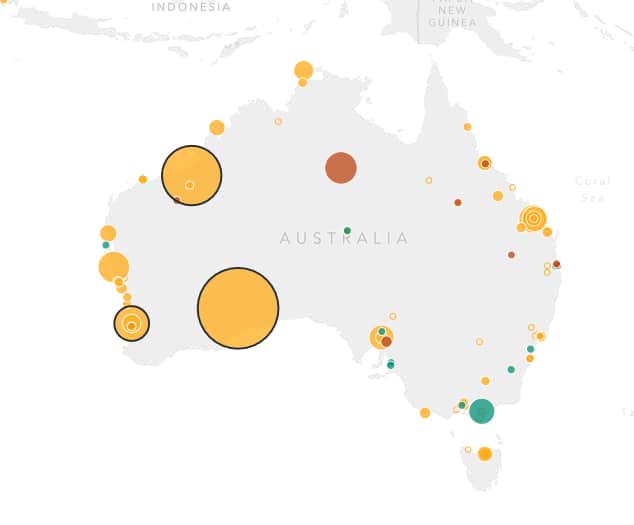 AREH aims to target the mining giants active in the Pilbara as customers for its power, BP said. The biggest iron ore players globally and in Western Australia are all seeking to decarbonize their power hungry operations.

If fully built out to 26 GW of power capacity and the accompanying green hydrogen and ammonia volumes, AREH is expected to abate around 17 million mt of carbon in domestic and export markets annually, BP said.

"It truly reflects what integrated energy is—combining solar and onshore wind power with hydrogen production and using it to help transform sectors and regions. It also reflects our belief that Australia has the potential to be a powerhouse in the global energy transition, benefitting from both its existing infrastructure and abundant renewable energy resources," she said.

AREH isn't BP's only green hydrogen bet in Western Australia though. In partnership with Macquarie Group, BP is looking into building a green hydrogen hub at the site of its first refinery in the state, the Kwinana facility. A feasibility study began in September 2021, with BP saying in April that the results would be published "soon." Since then though, the federal government promised up to A$70 million ($48.9 million) of backing for the plan.

InterContinental Energy also has another green hydrogen iron in the fire in the state. A consortium alongside CWP Global and Mirning Green Energy in July 2021 unveiled plans for a wind and solar project in southeastern Western Australia that could be as large as 50 GW, with the output to be used to produce up to 3.5 million mt of green hydrogen or 20 million mt of ammonia annually.

The Western Green Energy Hub (WGEH), unlike many other energy mega-projects announced around the world, has the backing of both local aboriginal groups. Mirning Green Energy is a wholly owned subsidiary of the Mirning Traditional Lands Aboriginal Corporation. It has state government support too.

Reese said the expected demand for Australian green hydrogen and ammonia means there is room in the market for both AREH and WGEH. That said, the location of WGEH in the southeast of the state hurts the economics for transportation of exports and it does not have the built-in power and gas customer base that AREH commands in the Pilbara.

Adding 50 GW of wind and solar at WGEH and a further 26 GW to the north in the Pilbara would reflect the new Labor government's ambitions though. Anthony Albanese, the Labor leader who was sworn in as prime minister on 23 May, promised to "end the climate wars" and build Australia into a "renewable energy superpower" following his victory.

Albanese and Labor also promised during campaigning to promote green hydrogen produced from renewables and allocate money from a A$15 billion National Reconstruction Fund to electrolyzers.

Australia has already seen a rapid expansion of its renewable power generation in recent years. Figures from the Clean Energy Council, a Melbourne-based trade body, show the country's generation from renewable sources totaled 74.7 TWh in 2021, or 32.5% of total output. In 2020, 62.9 TWh of electricity, or 27.7% of the total, was generated by renewables.