BlackRock held positions in 74 of the 250 green bonds issued in 2021, according to IHS Markit's definition of the term, with its nearest competitor State Street holding only 28 such positions.

IHS Markit considered only those green bonds in its analysis that it said were "fitted" to investments in clean climate risk reduction and climate-focused, clean-technology solutions.

With the threat of global warming looming in the form of more frequent storms, tornadoes, and wildfires, companies and countries are taking steps to transition to a net-zero carbon future.

A year ago, BlackRock CEO Larry Fink told company CEOs that "climate risk is an investment risk" and the transition to net zero presents a "historic investment opportunity."

This year, Fink returned to that theme in his annual shareholder letter, released on 17 January. "Few things will impact capital allocation decisions-and thereby the long-term value of your company-more than how effectively you navigate the global energy transition in the years ahead," he wrote.

While the asset manager's role and scale makes it an obvious buyer for any bond, IHS Markit Climate and CleanTech Executive Director Peter Gardett told Net-Zero Business Daily that "BlackRock's appetite for green debt outpaces every other name." 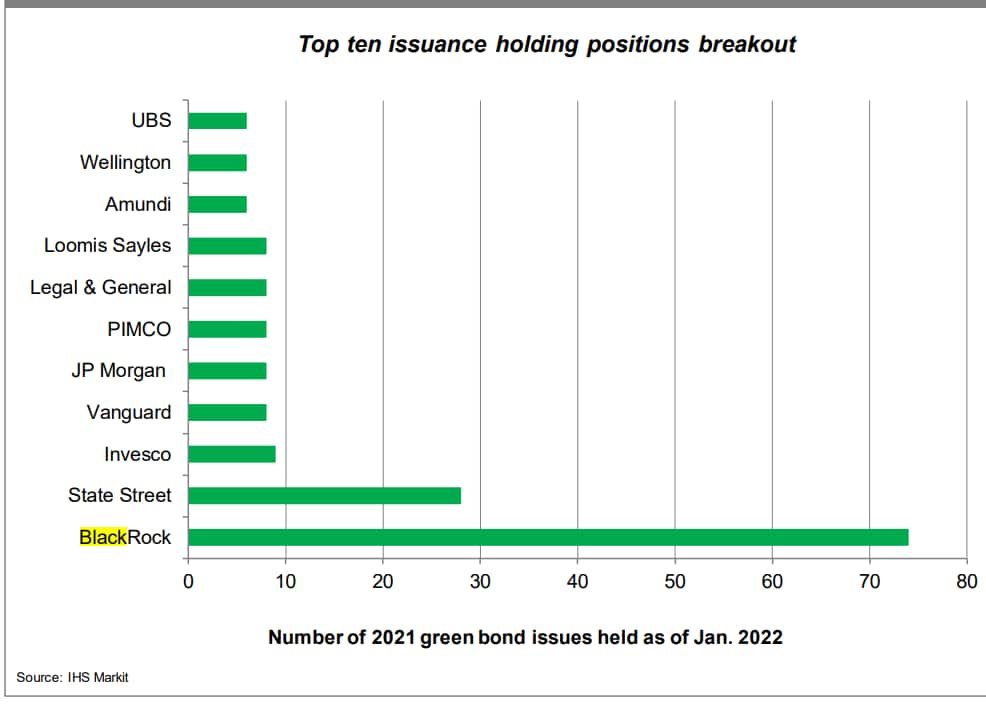 BlackRock has taken "a long position" that reflects the company's evolving strategy of moving capital towards companies and technologies that are transitioning towards a net-zero carbon future, Gardett added.

Reflecting that sentiment, Fink observed in his 17 January missive the "tectonic shift in capital" that is taking place towards sustainable investing, which has now reached $4 trillion.

At the end of the fourth quarter of 2021, BlackRock reported that it has $10 trillion of assets under management, including at least $16 billion in green bonds.

Among the 250 green bonds that IHS Markit analyzed, the largest bond in which BlackRock held a position in 2021 was also its only sovereign bond holding: a £10 billion ($13.7 billion) Green Gilt, or UK government green bond, which was issued 21 September to finance zero-emissions buses, offshore wind, and schemes to decarbonize homes and buildings.

The IHS Markit green bond database also shows BlackRock green bond holdings that span multiple continents and sectors. The company invested in a $700 million bond issued by SQM Chile, which is ranked among the world's top lithium producers; a €750 million bond for French utility Engie; $1 billion bonds each for Dominion Energy, Bank of Nova Scotia, Merck, and ABN Amro; and a €500 million ($565 million) bond for Maersk to fund the construction of its first feeder vessel and eight ocean-going container vessels that will be capable of operating on carbon neutral methanol by 2023 and 2024, respectively.

"This is just the beginning -- the tectonic shift towards sustainable investing is still accelerating," Fink wrote.

Noting that every company and every industry will be transformed by the transition to a net-zero world, Fink challenged companies that are not yet taking advantage: "The question is, will you lead, or will you be led?"

Looking ahead, Fink said, "the next 1,000 unicorns [billion-dollar startup companies] won't be search engines or social media companies, they'll be sustainable, scalable innovators -- startups that help the world decarbonize and make the energy transition affordable for all consumers."

At the same time, he said incumbent companies need to figure out their role as world economies transition to net zero.

"As your industry gets transformed by the energy transition, will you go the way of the dodo, or will you be a phoenix?" Fink asked.

Not divesting from oil and gas firms

He made it clear that BlackRock will not pursue a policy of divesting completely its oil and natural gas companies, noting that gas will play an important role both for power generation and heating in certain regions, as well as for the production of hydrogen.

However, IHS Markit's analysis showed that no US-based international oil and gas company issued a green bond in 2021, unlike their global counterparts, such as Canadian pipeline group Enbridge, Indian conglomerate Adani, or European firms like Repsol and Eni.

Fink indicated that BlackRock is looking at "foresighted companies" across a wide range of carbon-intensive sectors that are transforming their businesses and actions to adapt to a decarbonized world.

"We believe the companies leading the transition present a vital investment opportunity for our clients and driving capital towards these phoenixes will be essential to achieving a net-zero world," Fink said.