The directives were included in Biden's 20 May Executive Order on Climate-Related Financial Risk that laid out a blueprint for how the federal government will assess and account for the social cost of GHGs as well as climate-related financial risks for goods and services it purchases, loans it underwrites and guarantees, and assets it manages.

Biden has made tackling the climate crisis a priority since taking office on 20 January. The latest order reflects actions the president indicated he would pursue to make sure that climate impacts are addressed by every branch of the federal government.

In the 20 May order, Biden highlighted that the intensifying impacts of climate change present a physical risk to assets, publicly traded securities, private investments, and companies, such as increased extreme weather risk leading to supply disruptions. He also noted that the global shift away from carbon-intensive energy sources and industries presents a transition risk to companies, workers, and communities.

If the federal government doesn't take these actions now, Biden warned "the competitiveness of US companies and markets, the life savings and pensions of US workers and families, and the ability of US financial institutions to serve communities" will be at stake.

To prepare for these risks, the order directed the federal government to lead by example.

Under this directive, the Federal Acquisition Regulatory (FAR) Council, which governs federal procurement practices, has been asked to look at amending regulations to enable federal agencies to consider the social cost of GHGs in all procurement decisions "and, where appropriate and feasible, give preference to bids and proposals from suppliers with a lower social cost."

From a legal standpoint, Graham said the FAR Council can accommodate the changes in regulations to incorporate the climate directive as long as it stays within statutory boundaries, such as making sure all bids are competitive

Implementing this directive though is another matter altogether, Graham said.

The 20 May order is not just limited to the climate risk posed by goods and services that federal agencies will purchase. It also includes a series of deadlines for various federal agency heads and White House advisers, including a directive to rescind two US Department of Labor (DOL) rules that took effect less than 10 days before Biden took office.

This strategy, the order said, also will identify the public and private financing needed to reach Biden's economywide net-zero emissions goal by 2050—while advancing economic opportunity, worker empowerment, and environmental mitigation, especially in disadvantaged communities and communities of color.

It also gives McCarthy and Deese 180 days to submit a report detailing actions that can be taken under federal employment retirement laws to protect the life savings and pensions of US workers and their families from the threats of climate-related financial risks.

These actions include publishing a rule by September of this year to suspend, revise, or rescind two DOL rules -- "Financial Factors in Selecting Plan Investments" and the "Fiduciary Duties Regarding Proxy Voting and Shareholder Rights" -- that would restrict retirement plan advisors from considering corporate environmental, social and governance (ESG) risk as a factor when making investments. DOL in March announced it would not enforce these rules.

Of particular interest to investors and analysts alike is the directive to Secretary of the Treasury Janet Yellen, in her capacity as the chair of the US Financial Stability Oversight Council (FSOC), to prepare a report within 180 days to recommend actions to reduce risks to financial stability. Congress created the FSOC in 2010 after the subprime mortgage crisis to identify and monitor risks as well as to respond to emerging threats to financial stability.

IHS Markit CleanTech Executive Director Peter Gardett, who tracks global climate-related investments, said "the order is descriptive, not prescriptive, but it clears the way for some extremely powerful potential changes in finance stemming from a new approach to climate risk."

The Biden administration has made it clear that "what gets measured, gets managed, and that disclosure of the way physical climate change results in financial losses will create a meaningful mechanism for change," Gardett added.

Agencies already on a roll

Yellen and other federal regulators have already been implementing what the Biden order puts down in writing. In her first meeting as FSOC chair on 31 March, Yellen announced that climate change risks would be a focus of emerging risks for the council moving forward. At the same meeting, she asked staff at the US Federal Reserve Board (Fed) to report on the steps it was taking to account for financial risks, and for Fed Chairman Michael Powell to comment on those efforts.

The SEC also is receiving public comment to improve reporting of climate risk by publicly traded companies that critics say is currently inconsistent and incomplete. The CFTC also announced in March it was creating a unit to facilitate with price discovery of any new derivative and futures products related to climate risk.

According to IHS Markit's Gardett, companies and investors will find out four months from now how the US government is matching its national climate commitment under the 2015 Paris Agreement on climate to activities in the real economy. Biden has announced a goal to halve GHG emissions by 2030 compared with 2005 levels and reach net-zero carbon levels by mid-century.

"By assigning dollar values to emissions reductions, investors will hear from Brian Deese and Gina McCarthy what they need to know about how the federal government will approach carbon accounting under this administration," he added.

Arriving just ahead of the UN COP26 meeting on climate, Gardett said, the FSOC's report also will carry weight not just for the Biden administration that is trying to take the lead on tackling climate, but also for investors. Gardett said the FSOC report has the potential to "significantly and forcefully redirect the flows of capital through lending, investing and financial product trade" as well as altering the ways banks assign risk in their lending portfolios.

"By assigning higher risk metrics to financed emissions, bank regulators have the latent power to accelerate and compound the shift of capital available to cleantech while limiting the balance sheet space available to fossil fuels," Gardett said.

Ceres, a network of investors interested in pursuing sustainable solutions, has been pushing for the changes contained in Biden's order. In a June 2020 report, Ceres urged the FSOC to make climate impacts a priority.

Steven Rothstein, Ceres Accelerator for Sustainable Capital Markets managing director, said the 20 May order on climate financial risk was long overdue, but was "a bold statement from the Biden administration" that contains many valuable initiatives.

In a 20 May telephone interview, Rothstein said what caught his eye was the order's directive requiring vendors to the federal government to disclose climate risks for the goods they sell or services they offer for the first time. "That's another example of an important step that has never before been take in the United States and another example of leadership under the Biden-Harris administration," he said.

Asking the Treasury Secretary to require all agencies to address climate risks and to report back in 180 days was another important initiative included in the order, he said.

In an April report, "Turning up the heat: the need for urgent action by US financial regulators in addressing climate risk," Ceres included a scorecard (see below) ranking federal agencies on the basis of climate-related actions they had taken as of 30 March.

"Some agencies are showing great leadership, turning up the heat on climate action, while others are not yet there, and still others are not taking any action," Rothstein added.

The SEC, the Fed, the CFTC and the Treasury were all ranked as agencies that are proactively taking actions to address climate risks, while the Municipal Securities Rulemaking Board, which deals with municipal debt, the FDIC, and the National Credit Union Administration were seen as lagging. 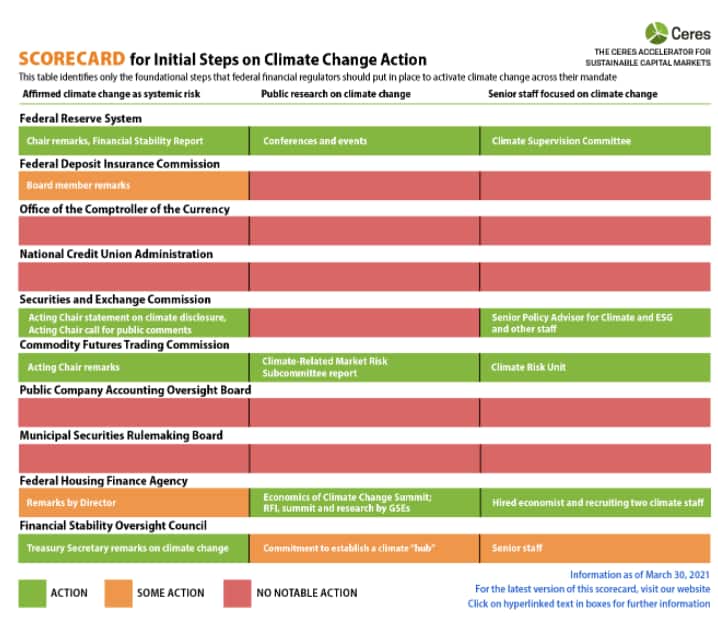 The executive order should be read as "a lot of public signaling on the work these agencies already are undertaking," said Margaret Peloso, a Vinson & Elkins attorney specializing in climate financial risk who participated in the 21 May conversation with Graham.

"I think it might be premature to sit in judgment about a brand new staff that wraps its arms around how to address climate-related risk," Peloso said, adding it would be worth heeding what these agencies do in the coming months.

The nonprofit Center for American Progress also welcomed the steps contained in the order, saying they safeguard the financial system from climate risk and would prompt a transition toward a more sustainable economy.

"The White House's leadership today puts wind at the sails for US financial regulators, who should swiftly integrate climate change into their regulatory and supervisory frameworks to protect the US economy from the devastating harms of a climate-driven financial crash," Andres Vinelli, CAP vice president for economic policy, said in a 20 May statement.