Biden FY 2022 budget doubles down on commitment to electric vehicles

Rapidly growing interest in electric vehicles (EVs) in the US would receive a substantial boost from President Joe Biden's fiscal year 2022 budget, which was announced on 28 May.

Rebates to subsidize EV purchases by consumers and direct spending on federal purchases of EVs would reach close to $1 billion in FY 2022, and a new tax credit would be created for purchases of medium- and heavy-duty zero emission trucks. Also, the budget envisions tax credits worth $236 million in FY 2022 for installation of EV chargers, as well as hundreds of millions more to upgrade the power transmission system, which would benefit EV users.

Biden spoke about EVs during the presidential campaign in 2020, and he devoted funding to EVs in the proposed American Jobs Plan and the Made in America Plan, both of which are incorporated into his $6-trillion budget.

Comparing the FY 2022 budget's EV investments to the FY 2021 budget from President Donald Trump is difficult, as the Trump budget did not contain a single mention of EVs in the federal budget summary, nor in the Department of Transportation (DOT) detailed budget. DOT is where the largest share of Biden's EV spending would occur.

Overall, the White House said the FY 2022 budget requests $36 billion in climate-related spending, compared with $14 billion in FY 2021 under the prior administration and what Congress appropriated.

The budget request, though promising for EVs, remains subject to congressional approval. Democrats have indicated their support, while Republicans have said Biden is shifting too much funding to climate-related investment.

In the budget, the American Jobs Plan—also known as Biden's infrastructure plan—seeks $795 million for FY 2022 grants for the purchase of EVs and rebates to consumers for their purchases.

Currently, individuals are eligible for a tax credit of up to $7,500 for the purchase of a qualifying EV, with a cap of 250,000 vehicles per manufacturer. Bills in Congress are seeking to raise the manufacturers' cap to 500,000 or 600,000 vehicles, as Tesla is approaching the current limit.

The Senate Finance Committee in May passed a bill, the Clean Energy for America Act, which would increase the rebate to $12,5000 per vehicle for those assembled in the US by union workers. Indicative of Republicans' concerns, however, the vote was 14-14, and it remains to be seen how the bill will fare in the full Senate.

Because the budget assumes growth in EV demand as manufacturers roll out new models, the EV tax credit figure would nearly triple to $2.3 billion in FY 2023, and then more than double to $6.4 billion in FY 2024, then double again in each of the next two years. 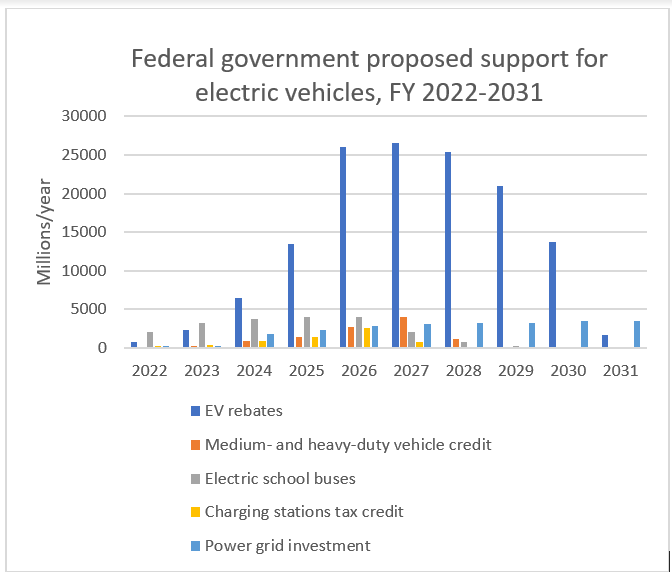 Biden's budget announcement states that he has included $600 million for 18 federal agencies to expand their EV purchases and for installing charging infrastructure, the latter primarily by the US Postal Service (USPS), as he seeks to jumpstart a move to an all-electric federal fleet by 2035. "[Fleet purchases would] provide an immediate, clear, and stable source of demand to help accelerate American industrial capacity to produce clean vehicles and components," the budget stated.

As part of Biden's first-day executive orders in January, he directed agency heads to devise a plan to shift all the estimated 645,000 federal vehicles (225,000 owned by the USPS) to zero emissions. Subsequently, he announced the Clean Buses for Kids program, which would seek to replace 20% of the school bus fleet with electric buses in the next decade.

"While the budget and infrastructure proposals are encouraging to manufacturers, the US regulatory environment continues to lag behind other global regions. Regardless, the positive direction being laid out by the Biden administration helps to smooth the transition for manufacturers into an electric future," Fiske said.

In the Made in America tax plan, Biden proposed tax credits for installation of EV chargers and upgrading of the power grid, which is considered a necessary step for the US to accelerate its transition to electrification of economic sectors that have traditionally relied on fossil fuels.

The FY 2022 budget envisions the launching of the National Electric Vehicles Charging Network, a $15-billion, five-year program to meet Biden's pledge to install at least 500,000 charging ports, especially on the interstate highway system.

In addition, the budget proposes to fund an EV charging station tax credit for private installations, with spending coming in at $236 million in FY 2022, then $432 million and $848 million, in the next two years, respectively.

Over a 10-year period, Biden's infrastructure plan proposes $174 billion in spending on EVs and charging stations. However, Senate Republicans have balked at this figure, and their counteroffer to the infrastructure plan in late May was for just $4 billion through FY 2031.

Accounting for the shift to EVs, the budget also provides a 10-year forecast for the revenue lost due to the decline in federal receipts for gasoline and diesel taxes. The current US gasoline tax rate is 18.4 cents/gal, and the current diesel tax rate is 24.3 cents/gal. The impact will be small in the next few years, such as $10 million in FY 2022, but it will top $1 billion/year by the end of the decade.

Administration representatives have suggested raising fuel tax rates as a way to help fund Biden's infrastructure bill and offset the decline in gasoline and diesel demand.

But so far, Congress is lukewarm to the idea, with Senator Ron Wyden, Democrat-Oregon, saying 11 May he views a fuel tax hike as "a big mistake." Wyden prefers to raise the corporate tax rate back to 28%, where it was until the 2017 Tax Cuts and Jobs Act reduced it to 21%.

Some of those transmission funds are found in the proposed $327 million for the Department of Energy's (DOE) Office of Electricity, which would be $115 million more than it received in the current year budget. These funds will both accelerate upgrades to the power grid that are essential for electrification programs, as well as providing $119 million for energy storage research and development, which can have EV applications.

DOE's Office of Energy Efficiency & Renewable Energy (EERE) also is being funded to support EVs. The office has been tasked by Biden to review how to reduce the cost of EVs through lowering the cost of critical materials for batteries, reducing the amount of critical materials that are used, and developing recycling technologies for those materials, said Kelly Speakes-Backman, principal deputy assistant secretary, in a US Chamber of Commerce discussion on 3 June. "We believe that EVs could reach cost parity with internal combustion engine cars by 2028," she said.

A report by EERE on critical materials "will be out very soon," Speakes-Backman said.

Support for EVs can be found indirectly, such as in the Environmental Protection Agency's (EPA) request for $342.9 million for grants to states and tribal nations for their air quality management programs. In its description of the need for those grants, EPA states that funds could be used "to facilitate the buildout of electric vehicle charging station infrastructure," as well as many other purposes.

The DOT budget states that its $5-billion Healthy Ports Program would provide funding for electrification of port equipment and vehicles, and that DOT itself would spend $11 million in FY 2022 to purchase EVs.