Proposed at $1.2 trillion over eight years, the "Bipartisan Infrastructure Framework" would be just over half the size of the $2.2 trillion "American Jobs Plan" that Biden proposed in the spring, which he later whittled down to $1.7 trillion (see links here, here, and here). But the framework represents a much larger investment than prior Republican proposals, none of which reached the $1 trillion level.

New spending would amount to $579 billion in the first year, then more than double to $1.209 trillion over eight years. 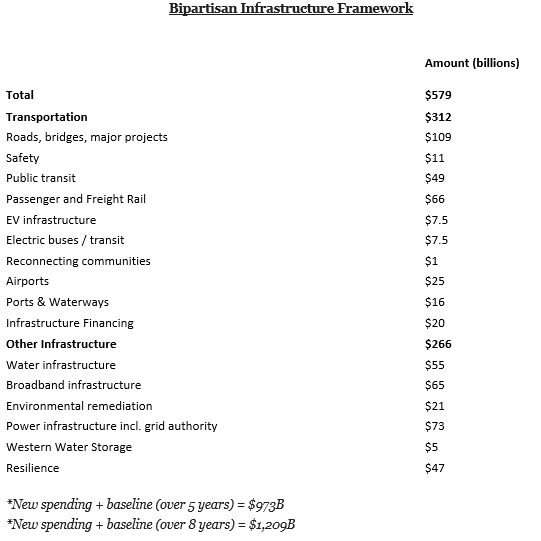 Ten senators—five Republicans and five Democrats—negotiated with Biden, and he praised them during a press conference at the White House. When asked about whether the Republicans would stay onboard if they are pressured by their colleagues, Biden said: "They've given me their word. Where I come from that's good enough for me."

As with Biden's earlier proposals, the plan includes numerous elements aimed at reducing emissions from the transportation sector as part of plans for a 50-52% GHG emissions reduction (from 2005 levels) by 2030 and a net-zero economy by 2050.

Information was not available immediately about whether the plan retains prior proposals to extend tax credits for new renewable generation capacity for a decade and credits to buyers of EVs.

Climate issues and environmental justice run through most of the spending categories, as the White House laid out spending for the expansion of transit and passenger rail networks; rebuilding of roads and bridges "with a focus on climate change mitigation" and safety for cyclists and pedestrians; resiliency upgrades; and cleanup of legacy pollution sites. The plan also would create an Infrastructure Financing Authority that the White House said "will leverage billions of dollars into clean transportation and clean energy."

While maneuvering through the Senate, where Democrats and Republicans each hold 50 seats, is considered more challenging than the House of Representatives, the plan will not necessarily sail through the lower chamber even though Democrats have an edge of 222 vs. 213.

Members of the progressive wing of the Democratic Party expressed frustration with the compromise, particularly over the relatively small share allocated to environmental justice matters.

"The diversity of this 'bipartisan coalition' pretty perfectly conveys which communities get centered and which get left behind when leaders prioritize bipartisan dealmaking over inclusive lawmaking (which prioritizes delivering the most impact possible for the most people)," wrote Representative Alexandria Ocasio-Cortez, Democrat-New York, in a tweet. (All 10 senators who negotiated the plan are white.)

But that's the nature of compromise, Biden said at his press conference. "… none of us got all that we wanted. I clearly didn't get all I wanted. They gave more than I think maybe they were inclined to give in the first place," Biden said.

The other complication is that Biden has indicated that he views the infrastructure plan as one of his priorities, but part of a package with his American Families Plan and the federal budget for the next fiscal year. A day prior to announcing the Bipartisan Infrastructure Framework, Biden said he would not sign an infrastructure plan without a budget resolution as well. "If only one comes to me … I'm not signing it. It's in tandem," he said after meeting with Senate Majority Leader Chuck Schumer, Democrat-New York, and Speaker of the House Nancy Pelosi, Democrat-California.

The Sierra Club issued a statement on 24 June seeking to hold him to that promise and outlining its priorities in the budget process for an end to fossil fuel tax breaks; retrofits for electrification of all public housing, schools, and hospitals; support for clean manufacturing—and higher corporate taxes to help pay for the initiatives.