Banks and companies were able to sell $175 billion in green bonds through the end of August 2021 that were "fitted" with investments in climate risk reduction and climate-focused, clean-technology solutions, an IHS Markit analysis of the market shows.

The 14 September analysis shows that a green bond market has evolved since 2020 that appears to be characterized by especially low interest rates, in part because the debt is explicitly linked to investment in climate-favorable projects, according to IHS Markit Climate and Cleantech Executive Director Peter Gardett, who analyzed bonds issued between March and September of this year.

Bonds are issued by companies, municipalities, sovereign states or sovereign-backed banks, and other financial institutions as a form of debt that is not a loan or other fixed-income product.

IHS Markit analyzed a subset of more than 140 separate green bond sales in 2021, examining their use of proceeds, language, and their product-level alignment with climate risk reduction methodologies, relying on guidance provided by International Capital Markets Association green bond principles.

Gardett found that the green bond market is oversubscribed owing to the push for clean energy solutions as part of the transition to a net-zero economy, and because it has evolved from what he called "a 1.0 state of broad and unstandardized tagging of existing bonds to a much more sophisticated and fitted 3.0 state during the summer of 2021."

While the $175 billion in fitted green bonds IHS Markit identified since March is small in size compared with the more than $3 trillion tagged at one time or another as "green," it represents "a key evolution" in capital markets that more closely ties investment capital with deploying clean energy technology and reducing climate change risk, Gardett and CleanTech Research Director Conway Irwin wrote in a 14 September report.

The analysts say the emergence of fitted green bond debt came in response to demand from investors who wanted to allocate funds to clean energy technology and from asset managers who in turn sought financial products that actually reflected cleantech and climate change risk.

According to the IHS Markit report, the 1.0 version of green bonds was merely a case of reclassifying existing securities, while the 2.0 version earlier this year saw more bonds linked to companies pursuing Paris Agreement-aligned net-zero targets. The latest 3.0 version, which IHS Markit said drew the $175 billion in debt between March and August, has companies linking debt to actual projects reducing climate risk or investing in clean technology.

The IHS Markit report cites Deutsche Bank as an example of an entity that has evolved in how it classifies its green or sustainable debt.

In August, the US Securities and Exchange Commission began investigating the sustainability claims of fund manager DWS, which is publicly listed but roughly 80% owned by Deutsche Bank. DWS has €820 billion ($969 billion) in assets under management.

In contrast, Deutsche Bank on 30 August issued a $200 million green bond for a 35-year term that Gardett described as the 3.0 version because proceeds from this transaction are to be used to fund eligible green assets, including renewable energy projects such as wind or solar power plants and the improvement of energy efficiency in commercial buildings in Taiwan.

IHS Markit's estimate of the size of the $175 billion fitted green bond market is more conservative than the $207.02 billion in green bonds reported for the same March-through-August time period by the UK-based Climate Bond Initiative (CBI), which has been tracking green bonds since the European Investment Bank issued the first one in 2007.

The difference, however, lies in how CBI and IHS Markit have chosen to define green bonds and track their proceeds.

CBI includes bonds when 95% of their proceeds are explicitly linked to climate-focused projects as well as when those projects have been certified by independent third parties, but it covers a larger universe of projects than those tracked by IHS Markit, such as water monitoring, recycling, walking and biking infrastructure, and telecommuting. IHS Markit's definition is focused more on projects that result in clean energy installation, emissions reduction from a shift in energy sources, and use of renewables.

There's no question that both sets of analysis illustrate a surge of interest in green bonds among investors.

As of 10 September, CBI said the green bond total reached $279.8 billion, which included $23.3 billion in certified climate bonds, and $256.5 billion in debt that the organization said is aligned with its definition of green.

IHS Markit's Gardett also noted that the fitted green debt market kicked off September with over a dozen major bond offerings worth $13.9 billion in the month's first 10 days.

Investors purchasing these bonds are citing new EU standards that require explicit links between capital raised and the green projects funded, he said.

Indeed, the IHS analysis shows that banks and companies in the EU have been leading this trend, issuing 49% the $175 billion of fitted green bonds between March and September, while borrowers in North America have played catch up through the summer, bringing their share up to 27%. The Asia Pacific region's share of these bonds stood at 19%. 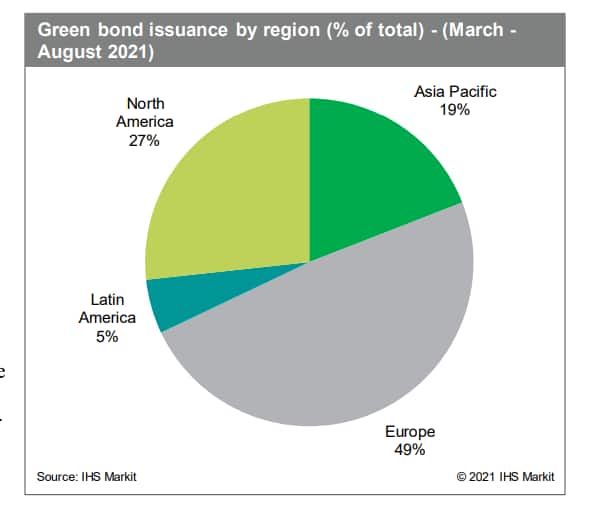 Among sovereign countries, IHS Markit analysis shows Germany issued the largest individual green bond of $4.6 billion at a minimal interest rate of 0.39% for a 30-year term in May, but the EU tallied the highest value of green bonds, totaling about $16.9 billion. 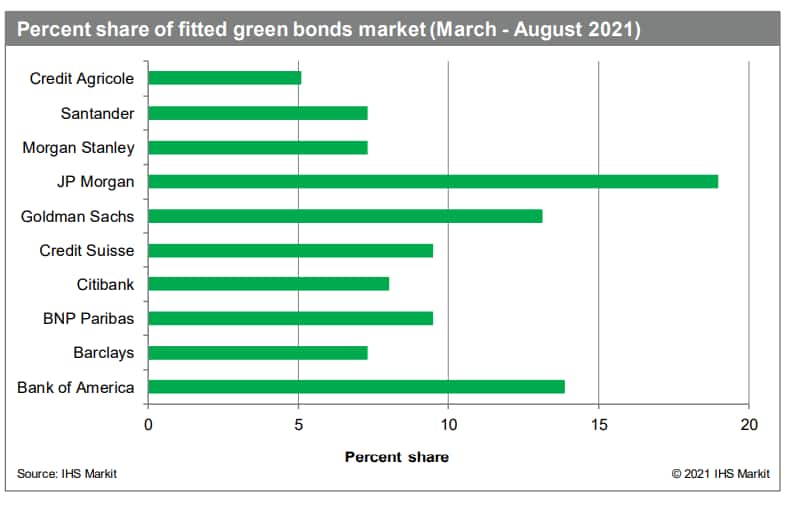 The smaller European competitors had a head start in fitted green bonds because European policies gave them clear signals on developing methodologies and matching cleantech pipelines, and those European banks have managed to maintain a meaningful footprint as the green bond market has expanded, he added.

European companies, but also US firms, snagged low rates for long-term green bonds, with the help and participation of high-profile underwriters.

The US Securities and Exchange Commission is expected to propose a climate change risk rule by the year's end and a final rule thereafter in 2022 after evaluating the comments it receives on the proposal, potentially encouraging use of green bonds by regulated corporations. Switzerland has also indicated plans to issue a climate disclosure rule, as has Singapore Exchange. The UK has proposed a climate disclosure rule while the EU has issued guidelines that need final approval.

"With greater insight into companies' climate change risk profiles, increasingly, fitted green bonds will be one tool issuers can use to fund cleaner asset mixes and lower emitting portfolios," the report said.