The Asian Development Bank (ADB) released a draft energy policy paper that proposes to end its financing for coal mining, oil and natural gas exploration or extraction, and new and existing coal-fired generation.

The draft represents a significant step forward for the bank's support of the energy transition in Asia's developing countries, potentially far beyond ADB's current policy. It has not approved direct financing of a coal power project since 2013.

The bank is also proposing not to finance nuclear energy projects, but it left open the door for gas-fired power generation.

ADB's announcement goes beyond the promise made by the president of the China-led Asian Infrastructure Investment Bank (AIIB), Jin Linqun, in October 2020 that it, too, is permanently getting out of the coal business.

The proposed policy, announced during ADB's 54th annual meeting earlier this month, will be voted on in the fourth quarter of 2021, and would take effect upon passage. It would affect $80 billion in energy investments that ADB plans through 2030.

Those investments would nearly double the $42.5 billion in energy financing the ADB said it provided to developing member countries between 2008 and 2018. 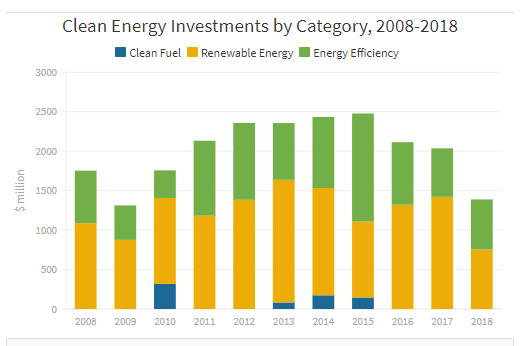 At the meeting, ADB President Masatsugu Asakawa said Asian and Pacific nations are responsible for about 50% of global GHG emissions and 80% of projected growth in coal demand. "Without decarbonizing energy systems, the goals of the Paris Agreement will be beyond reach," he said, and the same countries that seek ADB investment are especially vulnerable to climate change.

The bank invested about $5.3 billion in climate finance in 2020, of which around $4.7 billion was for mitigation (renewables, lower-emissions power, efficiency, etc.), and approximately $700 million for adaptation (natural barriers, flood control). Of the $4.7 billion, gas-fired power received 44% of the support, and gas exploration and production received 21%.

Going forward, investments will be rated according to "three key quantitative and timebound targets," which are decreasing CO2 emission intensity, peaking of CO2 emissions, and achieving carbon neutrality.

As part of its risk assessment of each investment, ADB will use an internal carbon price of $36.30/mt of CO2 (in 2016 dollars), which will increase by 2% per year above inflation. "This unit value can be used to estimate the value of avoided GHG emissions for projects that reduce emissions and the cost in damage created for projects that increase emissions," it said.

ADB noted a few exceptions to the planned restrictions.

For coal-fired power, it will consider projects that retrofit plants to run on cleaner fuels, including natural gas. For natural gas projects, including LNG import terminals and pipelines, ADB will consider financing a project if it replaces a higher-emitting resource, uses best-available technology, aligns with a 2050 net-zero target, and is able to demonstrate that no other resource can provide comparable reliability for the same cost (including the social cost of carbon).

Phasing out coal use will be the biggest challenge for Asia's generators, wrote ADB Energy Sector Group Chief Yongping Zhai in an explanation posted on the bank's website on 2 May.

"In 2018, coal generated almost 60% of electricity in Asia, and it plays an outsized role in larger countries. For example, coal generated around 73.5% of all energy produced in India, 66.5% in the People's Republic of China, 56.4% in Indonesia, 52.1% in the Philippines, and 44.6% in Malaysia," he wrote. "Coal-fired power stations often have a lifespan of more than 30 years, while the average age of Asia's coal plants is about 12 years. This means that phasing out coal will be a complex and enduring process."

In addition to its new financing standards, the bank will support governments in setting tougher emissions and energy efficiency rules on coal-fired plants, and it will also consider funding carbon capture and storage projects, Zhai wrote.

For gas, Zhai explained that ADB has to walk a fine line. "ADB has supported natural gas projects that are aimed at providing energy access to clean cooking and heating, and replacing coal power with more efficient and low emission combined-cycle gas-fired power," he said. But at the same time, he added: "We have to ensure that gas projects avoid long-term lock-in effects, and the risk of creating stranded assets."

As a result, the bank will consider a country's nationally determined contribution of emissions reductions by 2030 under the Paris Agreement and whether gas projects will contribute to the country meeting those goals. This would come into play, for example, on an LNG import terminal and gas transmission pipeline that increases gas supply to a country seeking to move away from coal-fired power or use of biomass for cooking and heating.

ADB's decision, especially its harder line on coal power, supports the stance that private investors are taking, especially in the region. In the private sector, Australian investment bank Macquarie announced earlier in May it is phasing out all coal lending, and it expects the last tranche of funding to run out in 2024. Malaysia's largest bank, Maybank, also said this month it will not finance new coal power or mining projects.

National commitments also are moving in the same direction. China has committed to peak coal consumption by 2025 and a gradual phasedown thereafter. South Korea has pledged to end overseas financing for coal-fired power plants.

But the draft energy policy drew skepticism from environmental finance advocates, who said that it doesn't go far enough and that both ADB and AIIB have financed too many fossil fuel projects in the past.

A report published in 2020 by the Center for Energy, Ecology, and Development (CEED) reviewed ADB's investment portfolio from 2009 through 2018. It found that the bank provided financial backing for nearly 29 GW of power generation projects. "At first glance, the mix of its energy generation projects in the past decade is impressive, with only 19% of the total relying on fossil fuels. Looking at the installed capacity of these projects, however, we see that at least half or 14.2 GW of the power produced is from coal, fossil gas, and oil," CEED wrote. "The ADB is instrumental in Asia's reality of a continued reliance on coal and other fossil fuels, which exposes it to issues of energy security and affordability as what happened during the [COVID-19] pandemic." 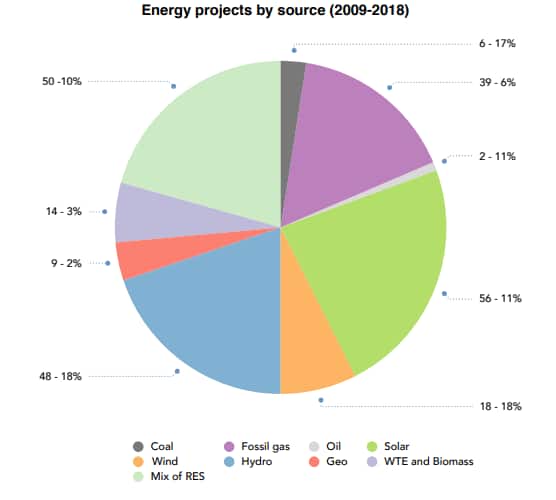 Among its recommendations, CEED said ADB should set a carbon price of $80/mt in its risk analysis now and raise it to $100/mt by 2030, or approximately twice the level that ADB has pledged in its draft energy policy.

On the gas side, ADB's pledge was insufficient for a coalition of 20 NGOs that sent an open letter to the bank, coinciding with the start of the 3-5 May annual meeting.

"Gas expansion poses one of the greatest threats to meeting the goals of the Paris Agreement and averting the very worst impacts of the climate crisis. According to Carbon Brief, gas played a larger role in increasing global emissions than coal in every year between 2013 and 2019," the NGOs said.

The organizations said that from 2016 to 2020, ADB approved $11.1 million in technical assistance grants, which typically fund studies to analyze the need for new energy infrastructure — and those studies often wound up justifying new fossil fuel investments. The environmental groups said the loans had helped governments "prepare to build out gas pipelines, power plants and LNG terminals across Asia. These grants have had an outsized impact per-dollar relative to loans and guarantees."