The G7 nations' call for "an absolute end" to coal-fired power generation financing by the end of 2021 is seen as a positive step and yet "a missed opportunity" by climate advocates who have been pushing for a complete halt to backing for all fossil fuel projects.

In a joint communique released 21 May, environment ministers from Canada, France, Germany, Italy, Japan, the UK, and the US recognized coal power generation as "the single biggest cause of temperature increases," and that global investment in "unabated coal power generation is incompatible" with the 2015 Paris Agreement goal to limit global warming to within 1.5 degrees Celsius of pre-industrial levels.

"We stress that international investments in unabated coal must stop now and commit to take concrete steps towards an absolute end to new direct government support for unabated international thermal coal power generation by the end of 2021, including through official development assistance, export finance, investment, and financial and trade promotion support," the ministers wrote at the conclusion of their virtual summit, which was held 20 and 21 May.

The ministers' announcement presages next month's full G7 meeting in Cornwall, England, and the determination of the US and UK to secure ambitious climate goals ahead of the UN COP26 meeting on climate to be held this November in Glasgow, Scotland.

US President Joe Biden released the nation's first-ever international climate financing plan on 22 April that directed the Department of the Treasury to take steps to end overseas financing of fossil fuel projects, but lacked a deadline. The agreement now commits the US to end its overseas financing starting in 2022.

The G7 communique is the first-ever acknowledgement of coal's role in exacerbating global climate change by G7 ministers, and it came a few days after the International Energy Agency (IEA) released its Net Zero 2050 Roadmap, which made waves in calling for an end--for the first time--to approvals of all new coal-fired projects, coal mines, and new oil and natural gas fields by the year's end. It also called for the phasing out of all coal-fired power projects by 2040 unless equipped with carbon capture and storage, starting with the least efficient plants by 2030. 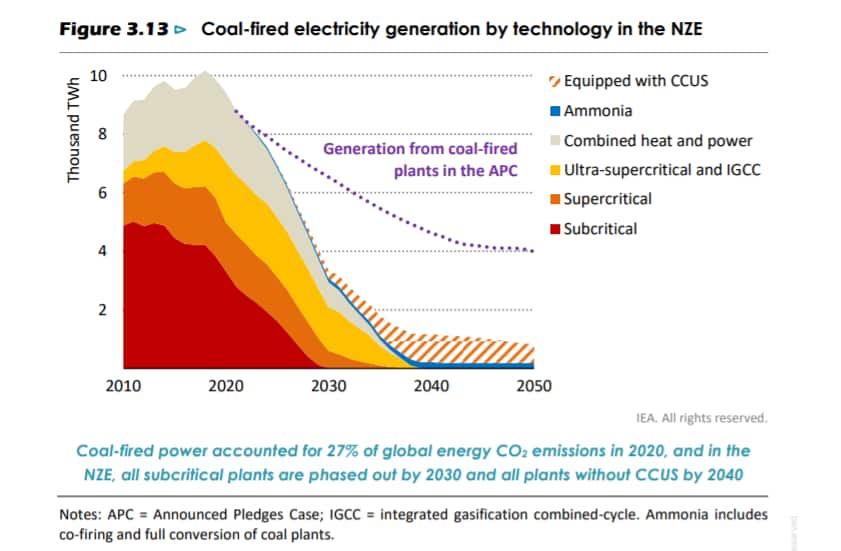 The G7 communique, however, didn't go as far as the IEA roadmap. It stopped at just ending financing for overseas coal-fired generation and called on member countries to phase out direct support for fossil fuel-fired generation without providing a timeline. The G7 ministerial agreement also gave member countries the discretion to opt out under "limited circumstances."

The agreement, however, didn't spell out the "limited circumstances," except to say that countries could exercise this discretion as long as it was "in a manner that is consistent with an ambitious, clearly defined pathway towards climate neutrality in order to keep 1.5°C within reach, in line with the long-term objectives of the Paris Agreement and best available science."

This loophole drew the ire of Friends of the Earth (FOE) US, with the nonprofit describing the communique as being "long on words, but short on substance."

"While the communique touched on the need to end international support for fossil fuels and fossil fuel subsidies, it so caveats the language, to render it useless. There is no mention of gas - merely an unclear reference to 'carbon intensive' fossil fuels with an unexplained allowance for exceptions," Kate De Angelis, FOE US international climate finance manager , wrote in a 24 May email to IHS Markit.

Earlier in May, various chapters of FOE joined forces with the nonprofit Oil Change International in warning a number of countries--including the US, UK, Australia, and Japan and their export credit agencies--about the dangers of continuing to support fossil fuel projects in violation of the Paris Agreement.

In a 4 May letter to the Japan Bank for International Cooperation (JBIC) and Nippon Export and Investment Insurance (NEXI), OCI expressed its ongoing concern for its continued fossil fuel support. While the letter did not reference specific projects, JBIC announced a $53 million loan for a coking coal mine project by Sojitz Corporation, a Japanese firm, in Australia on 1 April, and in March the bank signed off on a $56 million loan for the Longview coking coal project in West Virginia.

FOE England, Wales, and Northern Ireland (EWNI) has been successful in persuading the country's High Court to hear arguments against UK Export Finance, a government body, for its ongoing support for the $20 billion Mozambique LNG project under development by TOTAL, despite a March policy blocking such financing activity. And The Export-Import Bank (EXIM) of the US also has been cautioned against its support for the Mozambique project by FOE US especially since TOTAL has declared force majeure on the project.

The rush to end backing for gas-fired projects was criticized a week earlier by Nigerian Vice President Oluyemi Osinbajo who spoke at a Columbia Global Energy Summit on 18 May. Osinbajo said the ambitions of developing countries are being thwarted by Western nations hobbling energy-poor countries' ability to find backing for gas-fired power plants and gas-powered vehicle schemes that could bolster electrification rates, reduce petroleum product use and imports, and slow global warming.

The International Institute for Energy Economics and Financial Analysis also noticed the absence of any language aimed at targeting existing financing of fossil fuel projects though the nonprofit energy think tank preferred to view the G7 communique as a glass half full, calling it "simultaneously an important step forward and a missed opportunity."

"[The communique] recognizes the reality that new coal financing must end very quickly if the world is to avoid the worst effects of climate change," Clark Williams-Derry, IEEFA's energy finance analyst, wrote in a 24 May email to IHS Markit. "Yet it ignores the climate risks posed both by the oil and gas industry, and by the coal projects that have already been approved."

"If G7 countries are serious about addressing climate change, they will have to do a lot better with an immediate end to all international support for fossil fuels, including gas and other fossil fuel subsidies," FOE's De Angelis said in far more blunt terms than the UN Secretary General António Guterres, who welcomed the G7 ministerial agreement and urged the countries to shift financing to renewables.

IEA Executive Director Fatih Birol also was pleased that the G7 ministers had chosen to use its roadmap to guide their communique.

In a 21 May tweet, Dave Jones, senior electricity analyst for the UK-based nonprofit Ember, also lauded the G7 ministers for taking the cue from the IEA Net Zero Roadmap deadline for coal-fired generation.

"But the G7 climate ministers have stopped short of two other necessary actions: phasing out coal by 2030, and achieving clean power by 2035," Jones rued in that tweet.