The UK's fiscal watchdog believes the UK government can pay for the net-zero transition with less than it borrowed to recover from the COVID-19 pandemic—but only if it acts now.

In total, £42 billion a year is required to decarbonize sectors like household heating, manufacturing, construction, and vehicles, according to the Climate Change Committee (CCC), which oversees the UK's compliance with emissions budgets.

If it doesn't pay this amount in the next 10 years, the cost will double, according to the UK Treasury-funded arm's length body, the Office for Budget Responsibility (OBR).

It said "unmitigated global warming" would cost the UK 289% of GDP by the end of the century due to the cost of dealing with and adapting to ever-hotter weather and economic shocks caused by mass migration and conflict.

This would also create cyclical debt as certain economic shocks like weather events, on the rise globally since the 1980s, become more severe and frequent, leaving less time to pay back the deficit they create.

"Pandemics, climate change, and public debt dynamics are all subject to amplifying feedback mechanisms and tipping points that can result in spiraling and irreversible costs that put a premium on acting early," said the OBR.

Already, evidence can be found of the impact of a major economic shock, the OBR said. The UK's monthly borrowing in April 2021 was three times higher than the same period in 2020, as a result of the pandemic, and this elevated level is set to continue. Investor disinterest will grow, and interest rates will increase through 2047, the OBR said. It suggested the UK won't be able to grow its way out of or inflate away its debt and would face higher costs from future interest rate increases. 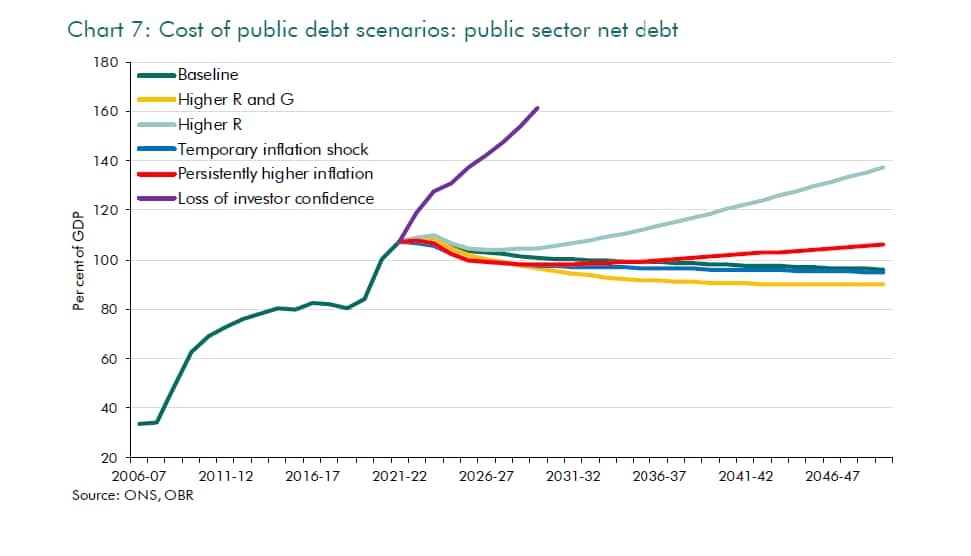 Stressing the need for action on reaching net zero, the agency compared that urgency to responses to the pandemic. "Countries that acted quickly to contain the virus have so far experienced fewer deaths, shallower recessions, and faster economic recoveries. In making the transition to net zero, delaying decisive action to tackle carbon emissions by 10 years could double the overall cost," said the OBR.

The amount of public sector debt in 2050 would be between 21% to about 58% of GDP, depending on how quickly the UK acts on introducing measures to reach net-zero emissions.

Under the OBR's "early action" scenario, the UK would benefit from being a developer or early adopter of low-carbon technology. However, the public debt would grow over 30 years mostly due to the loss of fuel duty following a decrease in use of fuels like gasoline and diesel. Taxing carbon emissions sooner would bring in additional revenue.

In the watchdog's "late action" scenario, the UK faces fiscal risks such as the scrapping of new investments in emissions-intensive assets and the need to pay for more imports of low-emissions technology, as well as the risk of losing export market share due to carbon-linked tariffs.

"The costs of failing to get climate change under control would be much larger than those of bringing emissions down to net zero," the OBR said. 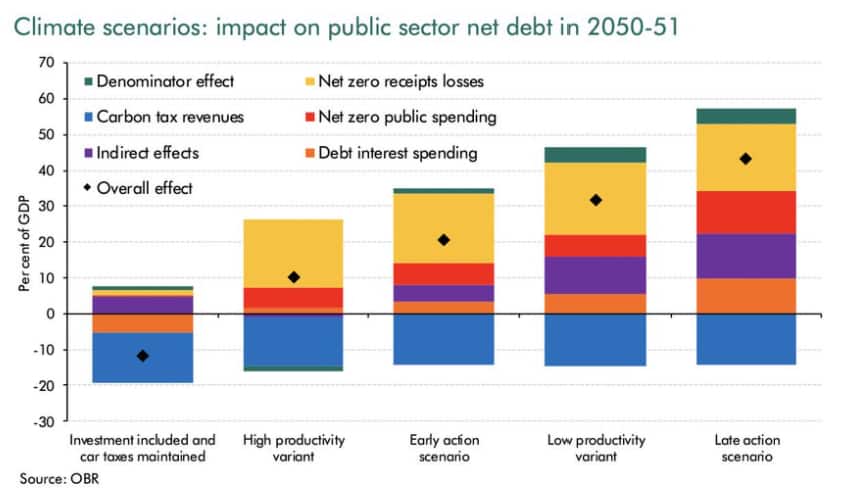 The OBR looked at how much it would cost to decarbonize different UK sectors like power generation and heating, and the proportion of costs the public would cover, in the run-up to 2050.

The most expensive sector to green would be the power sector, at £481 billion, and the next most costly sectors would be buildings (£396 billion) and vehicles (£332 billion).

It will cost the public the most to move the buildings sector to net zero. To achieve the required decarbonization, it would pay 44% of the costs required for addressing buildings and heating, 18% for the vehicle sector, and 5% for the power sector in the 2040s under a central scenario.

The other major cost comes from experimental technologies that remove emissions, collectively called Greenhouse Gas Removals (GGR). In particular, one the government recently said is slated for subsidies, carbon capture, utilization and storage (CCUS), while it sees linked technology direct air capture and storage of CO2 as having "the greatest deployment potential," according to the government's December report assessing its interim progress on net-zero goals.

The public will pay a very high percentage of the £101 billion in costs for emissions removal technology, starting at 89% in the 2020s and decreasing to 59% in the 2040s.

Already, the UK government has pledged initial investments of up to £1 billion on research into carbon capture, and is set to fund CCUS projects in four industrial clusters in the UK.

In 2019, the UK government made a pledge to reduce its GHG emissions to net zero by 2050, which it followed with additional targets such as a ban on certain diesel vehicle sales by 2030. The government has given itself until November to reveal how it will accomplish these aims.

But even these targets are not enough to meet either its carbon budget or its net-zero goals, and time is running out to realistically meet them, according to CCC. "Between now and COP26 the world will look for delivery, not promises," said Lord Deben, chairman of the CCC following a 24 June report to the UK parliament.

The CCC said the UK's current policies accounted for only 20% of the progress required on emissions between 2033 and 2037. While the UK has all but achieved its target of 40 GW of offshore wind by 2030, it should move more quickly to decarbonize buildings, heating, aviation, waste, land use, and set a carbon capture and storage price signal too, the report found.

On reviewing the CCC report, Greenpeace agreed that the UK did not appear to be spending its way to success on its net-zero goals. "Having a world-leading target is not enough. It needs to be accompanied by policies which match the target's ambition on cars and vans, houses and offices, trains and planes," said Greenpeace UK's chief scientist, Doug Parr.