Brussels-based environmental NGO umbrella group Transport & Environment (T&E) is calling for tougher EU CO2 targets for makers of vans amid growing demand for their use in e-commerce deliveries.

Vans are responsible for 2.5% of total EU CO2 emissions, a fraction of the amount attributed to car emissions (12%).

Road use policies often exempt vans but not trucks, such as with toll charges, spurring van purchases. The allure held steady during the pandemic when lockdowns encouraged more online shopping deliveries using vans.

In January 2020, the EU took aim at certain emissions cuts needed under its Paris Agreement targets by replacing two existing regulations for car and van manufacturers.

It hoped to meet emissions goals in part through Regulation (EU) 2019/631, which requires setting performance standards and specific emissions targets annually for each vehicle manufacturer, based on EU fleet-wide CO2 emissions reductions targets. This regulation is up for review in summer 2021.

This is because the regulation does not set the bar high enough, it argues. Specifically, the EU currently targets a 2030 date for a 31% CO2 reduction from a 2021 baseline that van manufacturers must do their part to meet.

To comply, they only need to make vans that efficiently use fuel rather than electricity, according to a 2016 study by the International Council on Clean Transportation.

T&E also described how, under the same regulation, the EU may award credit for potential CO2 emissions savings from technology under development to encourage low-emissions technology research, rather than for manufacturing actual low-emissions cars in real time. These "eco-innovation credits" effectively expand the emissions allowed under the official EU fleet-wide target, it said.

The sale of high-emissions vans will also provide a route to market for diesel technologies that are being phased out in the EU passenger car segment, according to the report.

Both electric van supplies and electric van sales are expected to remain static from 2021-2029, it found. "We face a dangerous cocktail of surging van sales and high van emissions. Standards that entered into force at the beginning of 2020 were supposed to make vans cleaner, but van makers have had to do almost nothing to reach them. In the case of Volkswagen, their emissions are even going up. With pathetic CO2 targets, the boom in e-commerce is becoming a nightmare for our planet," said James Nix, freight manager at T&E. T&E's study suggested the EU's current "benchmarks" related to zero- and low-emission vehicles be swapped for a 50% by 2030 target for sales of zero-emission vehicles—those mainly powered by electricity and hydrogen. This, it said, could only be achieved if the EU tightens its CO2 target for vans from a 31% to a 60% reduction by 2030.

As for vans, it recommended a phaseout of sales of vans with internal combustion engines by 2035.

Automakers have agreed to an upward revision of the target under the right circumstances. The European Automobile Manufacturers' Association (ACEA) has asked for more ambitious CO2 targets for vans and cars to be directly linked to the number of existing electric car charging points and hydrogen stations.

The trade group said the auto industry had expanded electric vehicle use in Europe, but the charging market lagged behind. "This trend can only be sustained if governments start making matching investments in infrastructure. That is why any new 2030 CO2 targets for cars must be conditional on a corresponding infrastructure ramp-up," said ACEA President and BMW CEO Oliver Zipse. 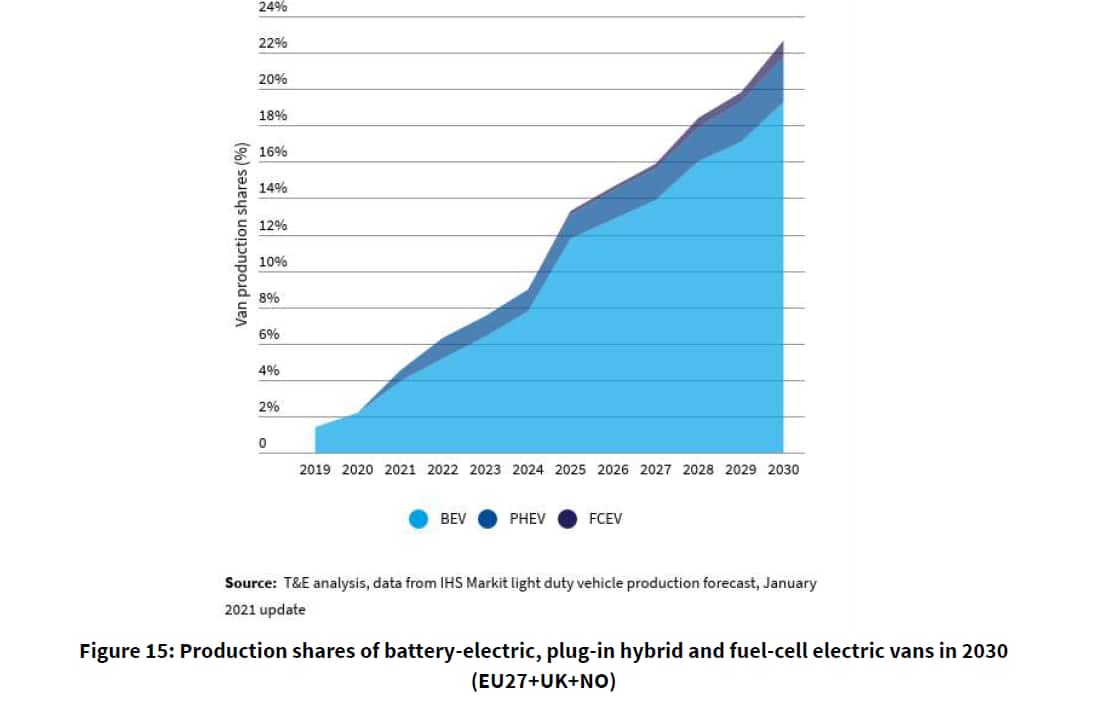 Looking at the production of vans in 2030, IHS Markit forecasts 43% of battery-electric vans in Europe will be produced in France by manufacturers like PSA and Renault.

France will also produce three-quarters of fuel-cell electric vans, while Germany, Spain, and Poland are likely to produce plug-in hybrid electric vans. However, EU regulations should not support their sale as much as the sale of electric vans, according to T&E.

Posted 18 May 2021 by Cristina Brooks, Senior Journalist, Climate and Sustainability